About Barnham and Eastergate 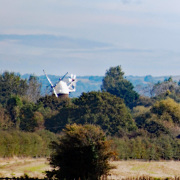 Barnham is a small rural parish within the Arun district and lies between the South Downs and the sea covering an area of approximately 373 hectares. It has a population of 1465 and contains around 580 residential properties.

Commercial activities in the parish are mainly related to agriculture and horticulture but also include a touring caravan park and a cluster of small retail units at Parsonage Farm beside Barnham Windmill. The parish contains several properties of architectural merit, the most imposing of which is Barnham Court; parts of the former Portsmouth to Arundel canal; and many miles of public footpaths.

At the beginning of the 1860s Barnham and Eastergate were small, quiet, agricultural villages that had changed little over the centuries. From 1846 a single track railway line had run through the parishes with the nearest stations at Woodgate and Yapton. In 1857 the track was doubled and steam trains became a common sight with their noise, soot and whistles as they passed the workers and cattle in the fields. When the site for the junction of the Bognor branch line with the main Brighton south coastline was chosen, no commercial centre was planned and for a while, it had little impact on the lives of the local residents. The new station was called Barnham Junction, although it lay within the parish of Eastergate,  but the inn opposite had borne the name of Barnham in its title for many years, being close to the Barnham Bridge over the small stream which formed the boundary, and the station was  nearer to Barnham village at St Mary’s Church. Barnham Community Hall has four event spaces and is situated within 8 acres of beautiful green space with access to a children's playground and multi-use game area.

Eastergate is a pleasant rural parish situated on the West Sussex Coastal Plain, protected from the extremes of weather by the South Downs to the North and the Isle of Wight to the South West.  Located almost midway between Arundel and Chichester it retains its unique identity at the centre of the “Five Villages” Parishes.  Standing between 6 and 10 metres above sea level with its rich soils and warm climate, it continues to encourage agriculture alongside carefully planned residential development. When the Parish was first recorded in the Domesday Book, Eastergate was a hamlet of about 100 people. A millennium later the population has risen to over 3500, with homes in both the “Old Village” at the East of the Parish and newer, major residential areas located in postal West Barnham. The older part of Eastergate, located in a designated conservation area, attracts visitors wishing to see St George’s Parish Church with its fine stained glass windows and Roman and Saxon brickwork. A short distance away is the 16th century Manor House with its Tudor Granary on steddle stones designed to keep out rats and vermin. Used to shelter the Christmas Nativity Crib each year, the Granary becomes a focal point for Eastergate Parish, which is now ecclesiastically combined with Barnham and Aldingbourne.

At Eastergate “Square”, opposite the Elm Tree Stores and below the former Eastergate Common, is the War Memorial erected to commemorate those parishioners who fell in the First World War with later names added to commemorate losses in the Second World War. The former common is presently used for open markets as well as for car parking and the entertainment of the public at what has become Fontwell Racecourse. At the northern end of the racecourse, being the junction of the A29 and the A27 is a newly constructed motel and the Old Stables pub/restaurant.  The Parish Sports Field is nearby to the Square and is home to Eastergate Cricket Club, to the Stoolball Club – a true Sussex game – and to local football teams.

The Parish Hall, built in 1907 has an interesting collection of murals portraying historic scenes from County history.

Barnham Through the ages