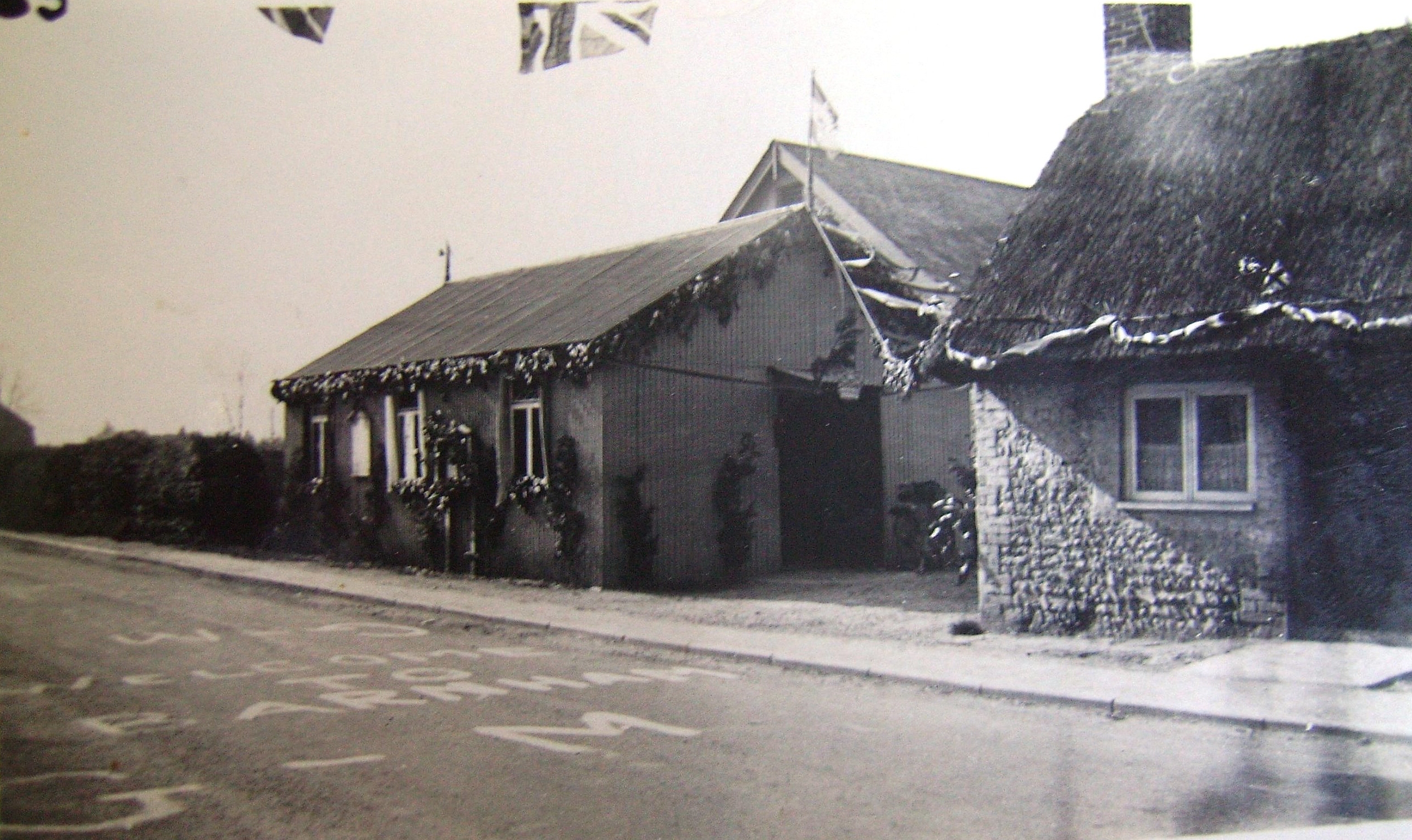 No one visiting the Community Hall today would be aware of the buildings that served the people of Barnham as a meeting place prior to 2013. First there was the old poorhouse, then the ‘tin hut’, then the 1928 hall. All have been demolished to make way for the new houses at the entrance that contributed to the finance for the hall. The new Community Hall has been built to the south of the old hall in Murrell’s Field.

Decorated for the coronation of George VI in 1937, the three phases of community provision can be seen in the picture on the left.

Phase I – the thatched cottages:

Until 1834 the village poor were the responsibility of the parish and this worked well while communities were for the most part rural. However the Poor Law of that year took the main responsibility from the local parish to a group system. In the case of Barnham and neighbouring villages this was Westhampnett Rural Council and the poor (or work) house was located there. In Barnham the parish poorhouse had been a thatched building that was said to have been built by French prisoners during the Napoleonic wars. This was situated in Yapton Road along the roadside where the entrance to the new village hall is today and immediately to the left of Beulah Cottages. The tithe map of 1846 lists the land in the ownership of Barnham Parish and the tenants were Henry Fisher and George Sanford – presumably living there with their families in the two cottages listed as ‘two tenements and gardens’. Later, the building was used for “technical classes” and the parish council thanked the county council “for the liberal grant made by them towards the Technical class” (Minutes 29.4.1897). This then was the first meeting place that was not an ale house. The building was demolished and replaced with a car park.

Parish Councils were formed under the Local Government Act 1894. In Barnham, EJ Marshall, the Brighton Grammar School Headmaster newly retired to The Cottage, Church Lane, and WA Hounsom, gentleman farmer of Bonhams in Yapton, were two of the founder members of the new civil parish council. The old thatched building may have been suitable for technical classes but EJ Marshall decided to pay for a new meeting room. This became known incorrectly over the years as “The Tin Hut” but also variously referred to as the Club Room, the Reading Room, and the Recreation Room. At this time so-called “Tin Tabernacles” could be ordered from a catalogue in kit form. They were timber-framed buildings externally clad with corrugated iron galvanised with a layer of zinc and lined with quality tongue and groove boarding. By March 1895 the hut was being used for the parish council meetings and the following year it was recorded in the Minutes (19.3.1896) “…that the sum of half a crown be paid to the custodian of The Parish Room for every Parish Meeting held there during the year 1896-1897. Mr E.J. Marshall informed the meeting that under the circumstances he would not make a charge for the use of the Parish Meeting Room.” In 1898: it was reported that the costs for using the Room had been privately met. It was also noted that the Freehold belonged to the Parish.

According to the late Harry Dart the room was used for Workers Educational Association classes and offered a meeting place away from the public house.  Mr Howard Rhind, manager of Sunnyside Nurseries, (living in 1920 at Ivy Cottage, now Rose Cottage, Yapton Road) organised whist drives, “sing songs” and dances including the popular Country Dance Club. On the death of EJ Marshall in 1899 the meeting room was formally presented to the parish.

In 1908 the parish council purchased from Thomas Boreham Borrow a strip of land amounting to one quarter of an acre to the rear (south) of the cottages. The parties involved were named as William Allan Hounsom, Chairman Barnham Parish Council, John Baker and Richard Collins and the sum paid was £25. Presumably John Baker the miller at Barnham Mill and Richard Collins of Parsonage Farm were also parish councillors. It is said that the extra land was initially used for allotments.

The Parish Room outlasted expectations by still standing in 2013 when it was demolished with the adjacent hall to make way for the new Murrell Cottages.

By the 1920s the number of villagers wanting to use the hall had increased to the point where a new larger hall was required. The Barnham branch of the Womens’ Institute was formed in May 1924 with Mrs HR Marshall (daughter-in-law of EJ Marshall) as the first president. The WI worked hard to raise a large proportion of the cost through fetes, jumble sales and so on.  Their president laid the foundation stone in 1927 and the hall, built by Mr Dart senior, was opened in 1928. The new hall was to the rear of but adjoining the old hut – an odd relationship that necessitated internal steps linking the two.

More money was needed to service the Parish Hall Debt Fund and contributions continued to be made by the WI together with the provision of a piano, china and a clock which were made available free of charge to hall users. Please click here The Women's Institute [pdf] 300KB to read of the contribution of the WI taken from the contemporary Minutes of their meetings. Sad to say, the Barnham WI folded in December 2016 after 92 years.

By the 1990s it was evident that a larger, multipurpose building was needed in the village with outside space for sports and recreation.  Once again the needs of the villagers had outgrown the hall and the building itself was at the end of its useful life. The village turned its attention to fundraising and the obtaining of grants and loans. B.L.A.D.E. (Barnham Leisure Amenities Development Enterprise) was set up as a charity by interested local people to develop leisure facilities in Barnham and registered in April 2001. The chairman was Terry Bedford. Land to the south of the site was leased from West Sussex County Council and a trim trail, children’s playground and a multi-use games area were installed. Murrell Cottages were built on the site of the old hall and carpark as part of the scheme to build a new multipurpose hall incorporating a hall, kitchen, office, police room and meeting rooms. The new facility opened in May 2013, administered by the Barnham Community Hall Charitable Trust. The planned dedicated pre-school building and sports changing facilities have yet to be funded and built.

The charity, B.L.A.D.E., ceased on 30th November 2016 and the Barnham Hall Charitable Trust ceased operating on 31stDecember 2016. At that time a new charity, Barnham Community Trust, was formed as an amalgamation of the two aforementioned charities. The trustees and assets of the former charities were transferred to the new trust. Terry Bedford continues as Chairman with five other trustees overseeing the development and maintenance of Murrells Field facilities, and the future expansion of the community hall. 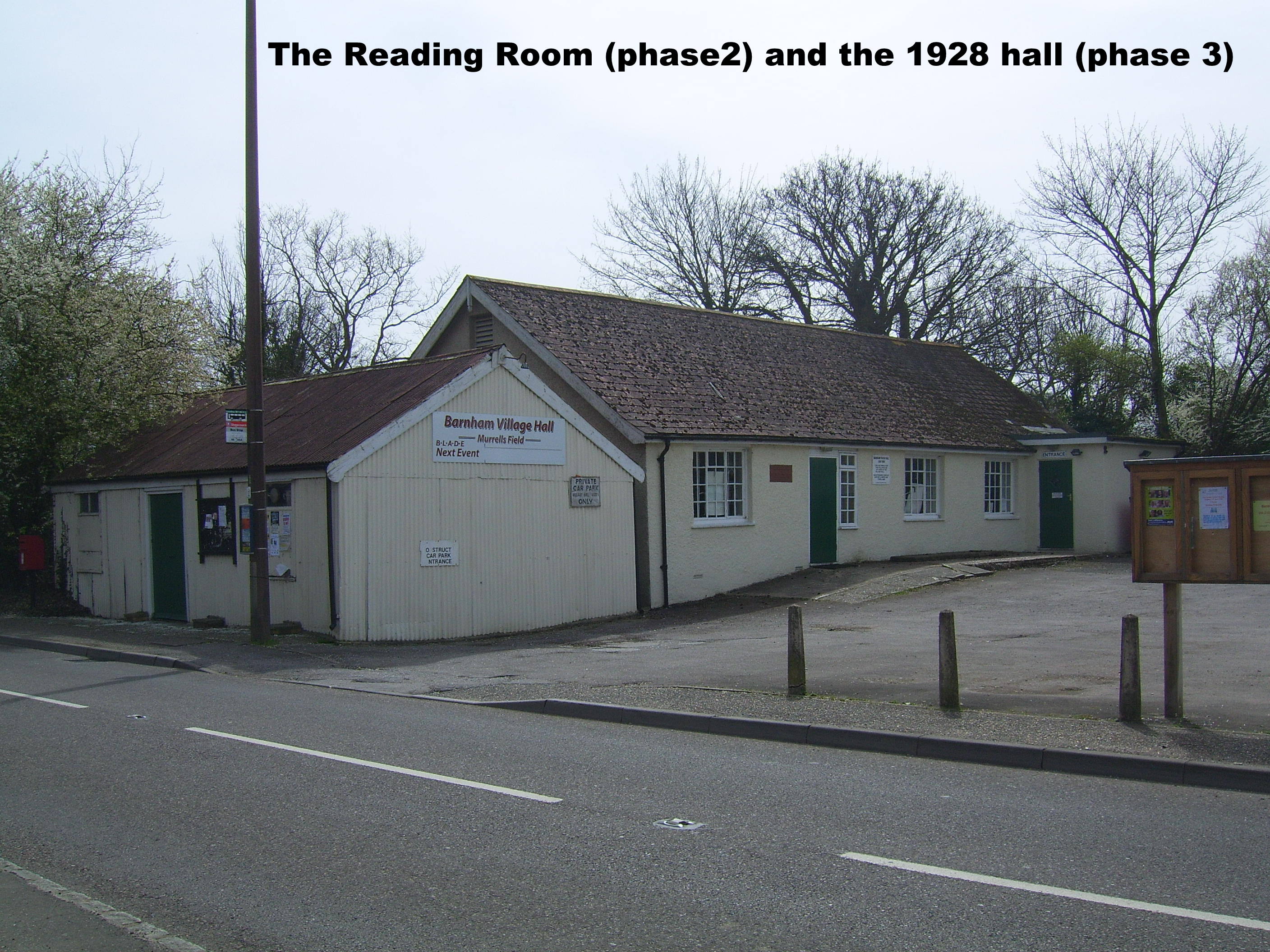