The History of Barnham and Eastergate 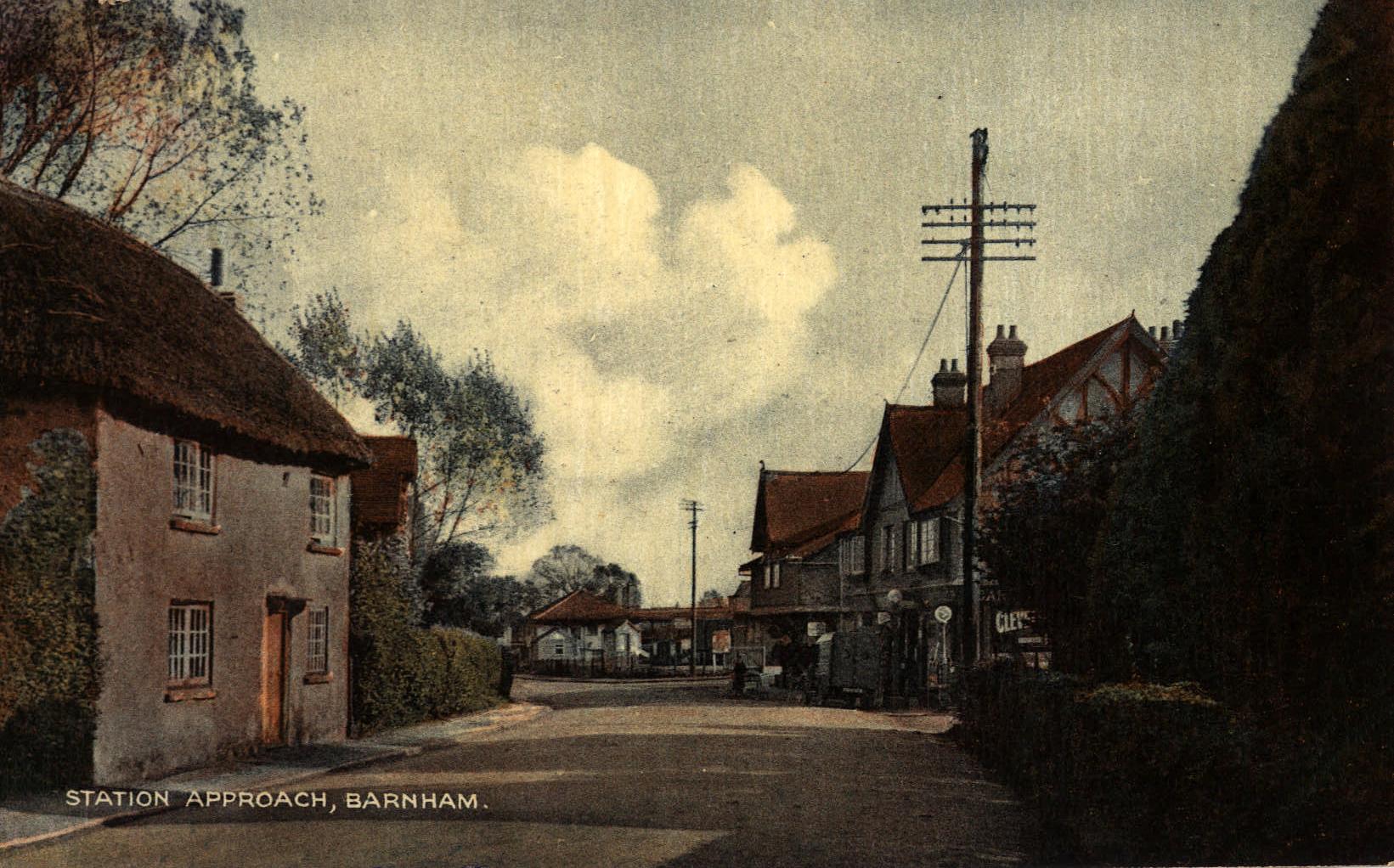 Welcome to an exciting initiative to bring the history of our villages together in one place where it will be accessible to local residents, schools and anyone, anywhere, interested in social history. Following research undertaken for West Sussex Records Office and the success of her book, Barnham: How the Railway Changed Village Life, Sandra Lowton would like to share the wealth of local history she uncovered from many sources.

The boundary between the two parishes of Barnham and Eastergate was the small rife which runs through a trading estate, under the road and railway line, then to the west of Marshall Close and Church Lane. The railway station and branch line to Bognor were built in Eastergate parish but closer to Barnham village so the station was named Barnham Junction. The commercial centre grew up around the station and this caused much confusion. However, in 2019 the two parishes merged to become Barnham and Eastergate Parish Council and the documents relating to both parishes have now been collected on one website.

The Murrell Arms was built in 1750 originally as a farmhouse for local landowner and farmer William Murrell (1718-1791) and his wife Elizabeth. The building became a public house in 1866 following the opening of the new Barnham railway station in 1864. George Murrell, grandson of William, was the first licensee. A blacksmith and a wheelwright worked next to the public house where the car park is today.

The first school to open in Barnham was in Yapton Road in 1906. Towards the end of the 1960s it was clear that the school had outgrown this site and land was purchased in Elm Grove in Eastergate parish as part of a new housing estate. The school continued on the two sites until the new school was extended and the three classes at Yapton Road joined the main school in 2000. The Yapton Road annexe and grounds were sold for housing and is now called Scholars Row.

To view the history and photos follow the link Barnham School

At the beginning of the 1860s Barnham and Eastergate were small, quiet, agricultural villages that had changed little over the centuries. From 1846 a single track railway line had run through the parishes with the nearest stations at Woodgate and Yapton. In 1857 the track was doubled and steam trains became a common sight with their noise, soot and whistles as they passed the workers and cattle in the fields. When the site for the junction of the Bognor branch line with the main Brighton south coast line was chosen, no commercial centre was planned and for a while it had little impact on the lives of the local residents. The new station was called Barnham Junction, although it lay within the parish of Eastergate,  but the inn opposite had borne the name of Barnham in its title for many years, being close to the Barnham Bridge over the small stream which formed the boundary, and the station was  nearer to Barnham village at St Mary’s Church.

An important early shop in Barnham was the general store, post office and drapers run for 57 years by father and son Frederick and William Chandler.

Opened in 1882, the livestock market brought prosperity to Barnham and Eastergate. In its heyday the Monday market sold in a typical year over 4000 cattle, 3600 calves, 30000 sheep and lambs, and 8500 pigs. The livestock were driven by local farmers and also arrived by rail.  They were then transported all across southern England for slaughter. The Second World War marked the beginning of the end and Stride and Son decided to concentrate on Chichester. Barnham Market closed in 1949.

An inn has been on or near this site since the early 19th century, long before the advent of the railway station and the Bognor branch line. The inn was demolished and rebuilt in 1907 to cater for the trade brought principally by the livestock market when Barnham was a bustling village well connected by the railway.

To view the history and photos follow the link to Penfolds

Barnham Nurseries and the Marshall Family

In 1881 Ebenezer James Marshall, headmaster of Brighton Grammar School, bought a cottage in Church Lane. The climate, soil and transport links in Barnham encouraged him to set up his two sons, Henry and Sidney, aged 21 and 18 respectively, as nurserymen. At the height of their success the brothers owned over 300 acres of cultivated land between them and were the biggest employers spanning four parishes.

Many local families lost menfolk in World War One and in most case there was no grave to visit. The men, some little more than boys, just didn’t come home. The churches of St Mary the Virgin at Barnham and St George at Eastergate both contain memorials and the Lion monument stands proud and prominent as a lasting reminder of their sacrifice.

What began as a service amongst friends in the station master’s front room, developed into a church building provided by the fundraising efforts of a community. Sadly in 2002, 71 years after the opening of the church, it closed due to lack of support. The building, however, remains and the exterior has hardly changed, testament to a congregation that once so proudly worshipped there.

Barnham Junction Station and the Livestock Market attracted merchants selling goods associated with both agriculture and the growing community. The 1920s and 30s saw purpose-built premises replace the wooden shacks. Many of these buildings are in use today albeit with different goods and services for sale.

In the 1920s and 30s the shops that opened reflected the needs of the expanding village. These ranged from coal merchant to provisions to bicycle repairs. Today many of these premises are still occupied but Take Away meals predominate.

Built in the 17th century as the manor house, Barnham Court stands today as strong and imposing as ever in its picturesque setting next to the Church of St Mary The Virgin. The estate has been broken up in recent years with the house and the farm workers’ cottages mostly sold to new owners but the farm remains in the hands of the Forse family as it has since 1934.

In the past few people owned their own home and most rented from private landlords, the manor or the church. In time it became the responsibility of local councils to provide for those who were eligible: the poor, soldiers returning from war, and local workers with families who needed a secure tenancy at an affordable rent. Many of these properties are now in private hands following the ‘right to buy’ but a few remain to fulfil that ideal.

Lake Lane was once in Yapton Parish and is today partly in Barnham, Yapton and Walberton. This section looks at the properties Parsonage Farm, Holt’s Bakery (demolished), Cox’s Farm (now called Rievaulx Cottage), and Pollards (Eric Wall Ltd) all in Barnham Parish.

It is possible that a mill has stood on this site for over 800 years. A small community settled around the mill, housing not only the mill owner but mill and farm workers as well. For 90 years the mill was owned by the Baker family with five Baker children, Percy, Leonard, Dorothy, Gertrude and Marjorie growing up there. Today the machinery is silent; the Grade II listed mill and outbuildings have been converted for residential use.

Today the village is proud of the new community hall and the outdoor facilities at Murrell’s Field. The earlier community buildings have been lost but not forgotten. Where Murrell’s Cottages are situated, once stood the thatched Poorhouse Cottages used for meetings and technical classes. Next to these a ‘tin’ hut was erected for Parish Council meetings, country dancing and community groups. As Barnham grew so did the need for a more spacious hall and, in 1928, with help from the Women’s Institute, a larger hall was opened. 2013 saw the sweeping away of the old and the opening of the new multi-use hall that we see today. The village continues to raise funds for the completion of the project to include a dedicated play school and sports changing facilities.

A small triangle of land at the northern end of Church Lane at its junction with Yapton Road is a place of commemoration, a legacy of Mervyn Cutten and the regulars at The Murrell Arms during his time as landlord from 1964 to his death in 2006. Find out here what the village sign and the stones and slabs signify.

A quiet country lane lined with interesting older houses ranging from 18th century to Edwardian. This section begins at the northern end next to the Murrell Arms, ends at the Church of Saint Mary the Virgin and also includes a short section on Highground Lane.

The first school in Eastergate, built in School Lane, served the community for nearly 150 years until the staff and children were able to relocate to a pioneering new open plan building in Church Lane in 1970. By this time the tiny old school had 100+ pupils and high standards were maintained despite the crowded, damp conditions.

Elm Tree Stores, formerly known as the Smith’s Shop, has been a feature of Eastergate village for over 150 years. Named after the elm tree that stood in the square until struck by Dutch elm disease, the store sold everything from bread to coal. The Collins family has been associated with the store and the village for generations and information about both can be found here.

Situated within the conservation area of Church Lane, Eastergate, The Wilkes Head is a traditional public house with a long history dating back to the end of the 18th century.

Manor Farm, the Robinson family and the Helyer family

Set in a conservation area, the farm comprises three Grade II listed buildings: the 16th century farmhouse, 17th century granary and also a large barn/cartshed, plus over 300 acres of grade I farmland. Farmed since 1918 by just two families, the Robinsons and the Helyers, the farm is owned by the Ecclesiastical Commissioners and is earmarked by Arun District Council for housing.

The Walling brothers, Will and Cecil, were very much of their time and their story encompasses the transition from horse to motorised transport.

Opened in 1908 as a village hall and rifle range, this building holds a secret that is little known or appreciated. The interior is adorned with paintings depicting scenes from Sussex history. The hall was financed by Alfred Day who later opened Fontwell Park Race Course, Reverend Yoward of St George’s Church and Captain Orr Ewing of Aldingbourne House. It is now run as a charity with a committee formed of members of the parish council and hall users.

Formed in 1874, the Bognor Water Company sought to provide the expanding town with a pure water supply. This was discovered in Fontwell Avenue, Eastergate and, despite being taken over first by the Bognor Urban District Council in 1929 and by Portsmouth Water in the 1960s, water is still being pumped today.

These two buildings have disappeared from Fontwell but were once well known to motorists, lorry drivers, cyclists and locals. The Ball’s Hut Inn (renamed The Fontwell in the 1980s) was demolished in 1992 and the Greenwood café tea rooms became a transport café and then the original Little Chef before it too was demolished.

A fuller history of St George’s Church can be found on the Aldingbourne-Barnham-Eastergate website so this section includes information about people of influence whom have been associated with the church and indeed with the village of Eastergate, namely a rector of 20 years and four generations of one family.

To view the history and photos follow the link to St George’s Church, Reverend Yoward and the Knight Family

Disclaimer - Every effort has been made to include only images that are out of copyright or for which permission has been given for historical use. Much of the information has been gleaned from the memories of local residents past and present. The validity cannot therefore always be verified but is presented in good faith. Apologies are given for any inadvertent omissions, errors or inaccuracy in content.