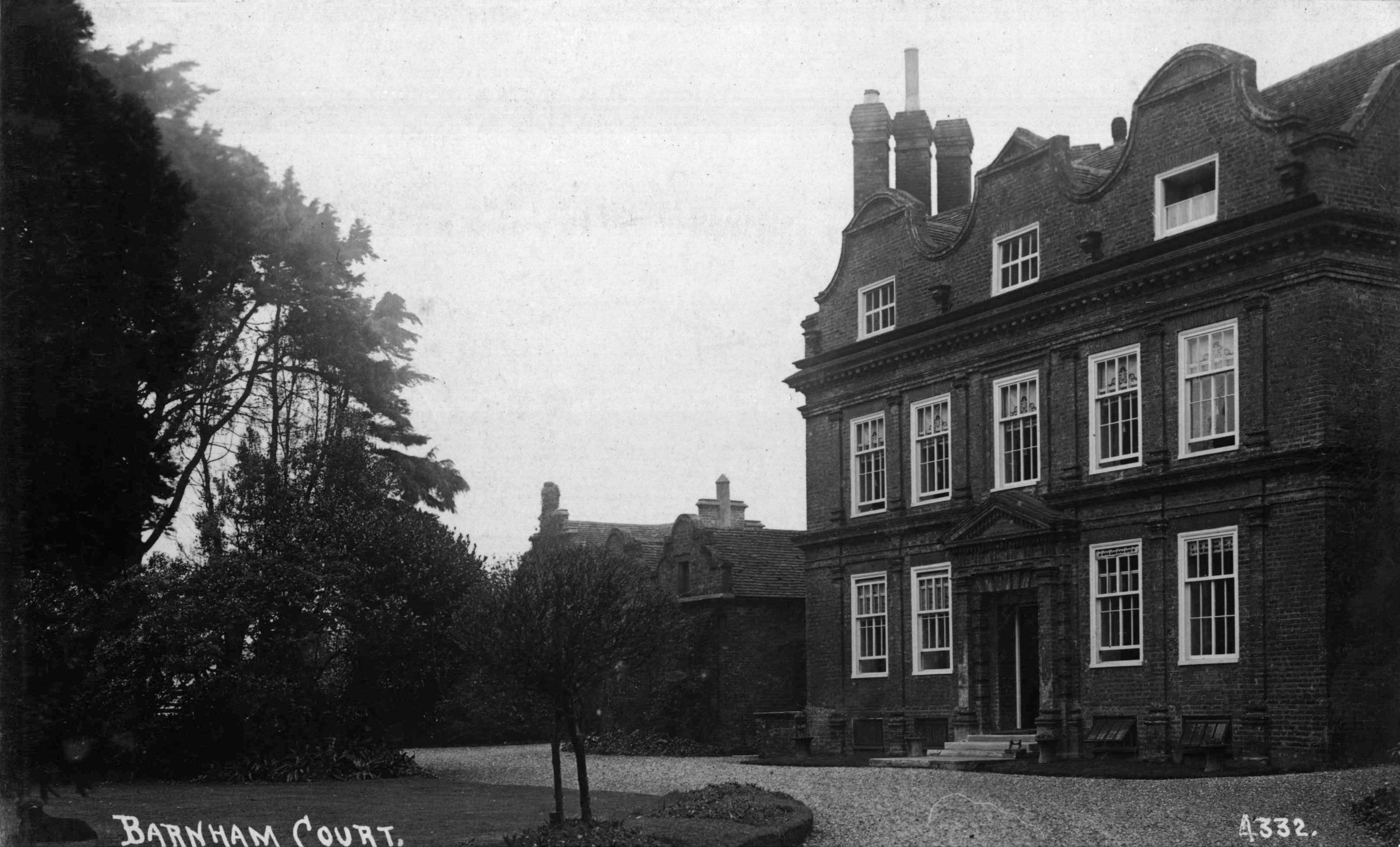 Barnham Court House and Farm, the Forse family and the Harris family

Barnham Court was built between 1630 and 1650 in hard red Sussex brick for the Shelley family of Michelgrove near Worthing. The house is unique in Sussex and, although it has been compared with Kew palace, its architect is unknown. The estate included neighbouring farmland, outbuildings and numerous properties to house workers. In 1686 it passed to William Morley of Halnaker, eventually descending to the Duke of Richmond. There have been many owners and tenants since that time that would have employed local farm labour.

In the 19th century the estate was inherited by Frances Page, daughter of John Page MP for Chichester. Frances married Lt Gen Gustavus Crosbie who died in 1843. Their son Charles Crosbie sold the estate in 1853 to Richard Cosens whose family had been tenants since 1756 or earlier. In 1871, on Richard’s death, the farm was sold to George and Arthur Woodbridge.

The house is described in ‘Barnham Past and Present’ edited by Hudson, Hillebrandt and Morrish, 1984 (out of print but available at WSCC Record Office LIB 9074): ‘The plan of the present house is an oblong measuring 40ft 6in by 36ft 6in, and the building comprises three storeys above a basement. The house has substantial foundations and the 2ft thick ground floor walls rest on even thicker basement walls. Within the basements are four large, perfectly dry cellars with arches of Tudor form. Above ground the whole structure is imposing and of excellent workmanship. The ‘Dutch’ gables and the four great chimney stacks each surmounted by three square stalks set diagonally and with shapely heads give a sense of great stability. …There are good examples of relief work and mouldings. The cantilevered cornices, brick with Roman Doric capitals, brick pilasters and a fine porchway add balance to the whole frontage design…’

When the estate was auctioned in 1877, reference was made to ‘Barnham Junction (First Class) Station on the London, Brighton & South Coast Railway, about 2 hours’ journey from London Bridge and Victoria by the Mid-Sussex Line, 6 miles from the Market Town of Arundel, 7 from the City of Chichester, 5 from Goodwood, 4 (or 10 minutes by rail) from Bognor, a very improving Marine Resort, and in direct communication with all the principal Towns of the South of England.’ Barnham then was presented as a convenient, well connected and almost fashionable place to reside. The sale, ‘in one lot’, comprising the house, stabling, lawn and gardens, the farm with 491 acres and numerous cottages, took place in the City of London and was expected to draw potential buyers from beyond the small parish of Barnham. The house was incorrectly described as Elizabethan, estate agent parlance for a fine historic residence. (WSCC Record Office ref: SP101)

Little is known of Joseph Harrison who lived at Barnham Court until his death in 1931 aged 82 except that he was fondly regarded by his nephews and nieces who, three years after his death, arranged for a lichgate to be erected at the church in his memory.  The inscription reads: To the Glory of God, and in memory of Joseph Harrison, for many years Churchwarden of this parish. Erected by his nephews and nieces, 1934.  A newspaper cutting in William Chandler’s 1949 scrapbook (WSCC ref: AM361/1) records that the gate was designed by the Diocesan Architect, constructed by Mr Dart of Barnham and was dedicated by the Bishop of Lewes.

In 1934 a talented electrical engineer named William Forse (known as WT) was casting around for a country estate. He was living in Wimbledon and had prospered through his involvement in the development of the gramophone and his promotion to Managing Director of a prominent company in this field.   Although not yet 50, he wanted to buy a suitable property in anticipation of retirement. Barnham Court and farm appeared to be ideal and, noticing that the property had once been owned by the Cosens family (his maternal grandmother’s name), he proceeded with the purchase. Initially, the Forse family remained in London, coming to Barnham for weekends and holidays but the outbreak of war prompted them to move permanently.

According to Bill Forse, his grandson, WT Forse increased the acreage of the farm and introduced prizewinning Red Poll pedigree cattle. Charlie Harris was the farm manager in charge of the arable side, ploughing, sowing and harvesting and living at Canal Cottages. At Number 1 and 2 Court Cottages in Highground Lane lived Jim Hoare the stockman and Ted Day the dairyman who was in charge of milking. Jimmy Langham was the gardener/odd job man living at The Lodge with his wife who was the cook at the house. The family also owned three thatched cottages in Church Lane called Red Brick Cottages (now converted to Street Cottage).  The daughter of Charlie Harris (Polly Edwards) remembers WT and Mrs Forse as good employers who were interested in the welfare of their employees, their families and the local community. Village fetes were held annually on August Bank Holiday on land behind the big house during the war and beyond and there was also a cricket pitch. Strong ties were made with the local primary school in Yapton Road. Because there was no sports field at the local school, sports day was held at Barnham Court. There was also involvement with the Young Farmers organisation. When WT died in 1952, the house and farm passed to his son John. The house and some cottages have since been sold but the farm, comprising approximately 350 acres, remains in the family with Bill Forse at the helm. There is a busy riding stable and outbuildings have been converted into holiday cottages. Visit the farm website at www.barnhamcourtfarm.co.uk

The thatched Tithe Barn was reputed to be the largest in Sussex and the eighth in England being 155ft long, 30ft wide and 25ft high. It was demolished in the 1960s.

The Harris family were Barnham’s largest family in recent history with fourteen surviving children. Thomas Charles Harris (Tom) was born in Wonston, Hampshire in 1879 and he married Lily (Lilian Laura) in 1900. Tom was a farm carter and they lived at various addresses in Hampshire until they moved from Hambledon to Barnham in 1905 or 1906. In the 1911 census their address was No.2 Red Cottages (now Street Cottage in Church Lane), a small tied cottage owned by Barnham Court, and they had seven children: William born in 1901, Lilian born in 1904, Wilfred Charles (Charlie) born in 1905, Jack born in 1907, Mabel born in 1908, Winnifred born in 1910, and Bertha born in 1911. A note at West Sussex Record Office (Cutten MS B1/1/1) states that another son Robert died aged 4 in 1906.

Tom Harris was employed as a carter at Barnham Court Farm. He would have been responsible for the welfare of the horses as well as the farm carts and machinery that the horses pulled in the everyday working of the farm. Later they lived at Rose Cottages, Church Lane, which have since been demolished and replaced with Primrose Cottage.  Tom died in 1945 leaving six sons and eight daughters.  It is remarkable that so many children survived and is, perhaps, testament to their healthy country upbringing and the regular income that Tom received from Barnham Court. His wife Lilian was described as a notable needlewoman and cook – attributes that were much needed at a time when a mother spent most of the day cooking, washing and sewing.

Of the twelve boys and girls in the choir at St Mary’s Church in 1923 when Harry Dart became choirmaster, five were Harris children. And older brother Charlie pumped the organ. Some of the Harris children, along with others, became members of a new Methodist Sunday School and fundraising began in the 1920s to build a chapel.  Rehearsals for fundraising concerts were held in Rose Cottage and Mr Harris paid for the hire of the Parish Hall for the entertainments.  The Methodist Church was opened in Yapton Road in 1931 and no doubt the Harris family was a sight to behold in the pews on that day in their Sunday best. By 1957 the family had dispersed and Mrs Harris had moved to Brighton to live with her son, Dick and daughter, Mabel.  Only Charlie, Winnie, Bertha and Jim remained in Barnham. Some relatives remain today such as Charlie’s daughter Polly Edwards who has played an active role in village life including the founding of the local boy scouts.

The information in this section has been gathered from Bill Forse and Polly Edwards, together with written accounts such as Barnham Past and Present, British History on-line, William Chandler’s History of Barnham, 1949 and Harry Dart’s memoir. 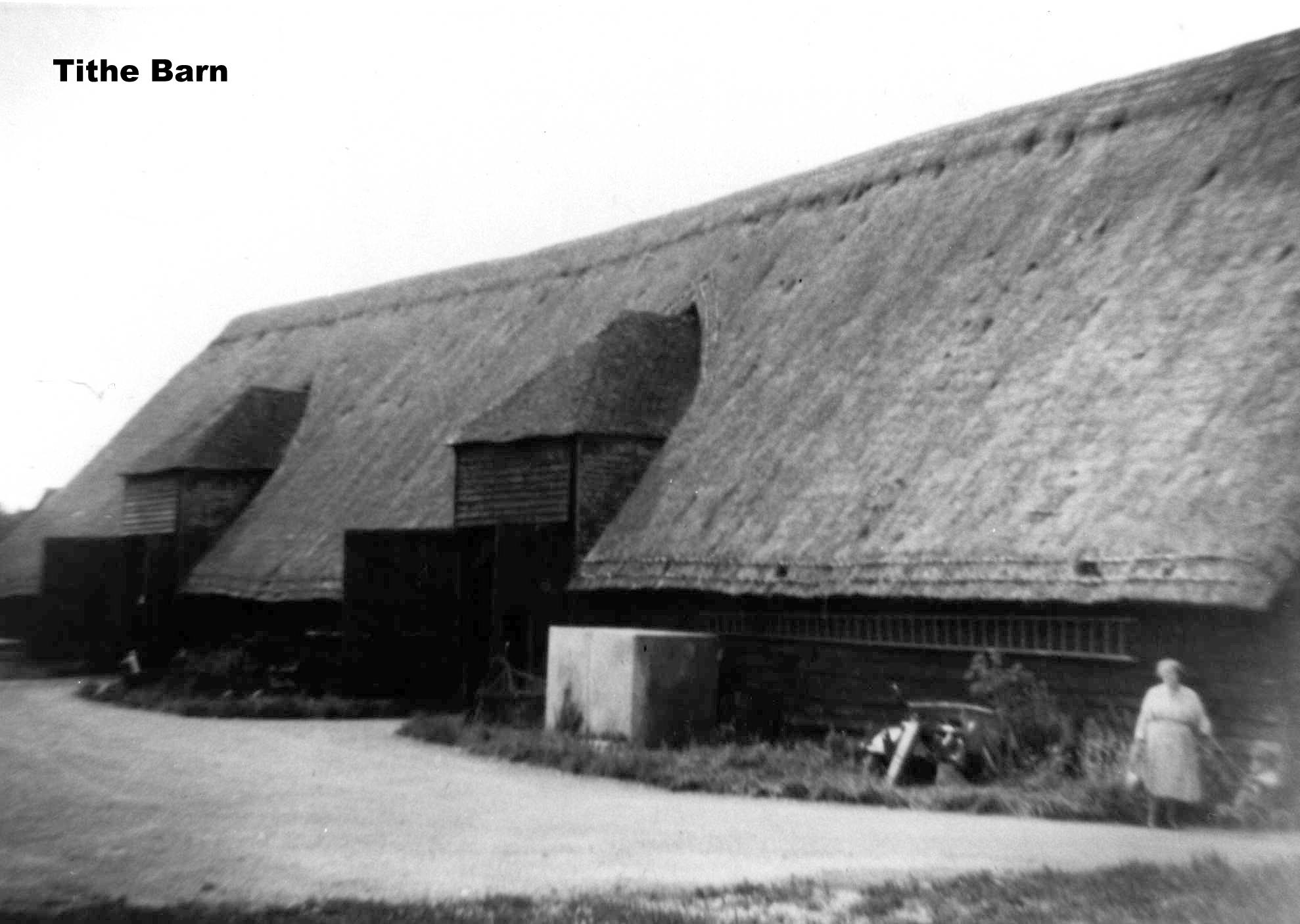