The first mention of a market was in 1882 when the following advertisement appeared in the West Sussex Gazette announcing the sale by public auction at Barnham Junction by Mr WR Winter, auctioneer, land valuer, and estate agent:

The fortnightly sale became a weekly market, at first on two sites, one in the station yard and the other to the north of the road opposite the station (OS map 1897). In 1890 Winter was joined by Stride, Waddington and Rusbridger Ltd and the Chichester Auction Company was formed selling at both Chichester and Barnham. In 1901 the market was purchased by Stride & Son and it was this family concern that administered the market through to its closure in January 1949.

In its heyday the Monday market epitomised the boom and bustle of Barnham Junction. Local farmers herded livestock on foot – the muck, the smell and the noise must have kept the genteel indoors on market days and Eastergate Parish Council dealt with many complaints about the state of the main road. Mr Edwards, a director at Toynbees/Croftway Nursery in Yapton Road, remembers having to close the gates to the nursery when the cattle were herded along the road to the abattoir at Yapton to stop them trespassing.

However, it was the close proximity of the railway station that enabled the market to become one of the busiest in Sussex. Drovers were employed to disembark the cattle, sheep and pigs from the special rail wagons and to deliver them safely to the market where they would be booked in and taken to the appropriate pens. After the sale the drovers were responsible for ensuring that the livestock was reloaded and transported to the butchers’ chosen abattoir predominantly in all the settlements between Portsmouth and Eastbourne but also in London and as far as Birmingham. This was the day of butchers buying meat ‘on the hoof’ and they and their agents developed an eye for weight and quality.  Traditionally butchers’ shops closed on Mondays because that was market day. In those days freshness and taste were of the essence. 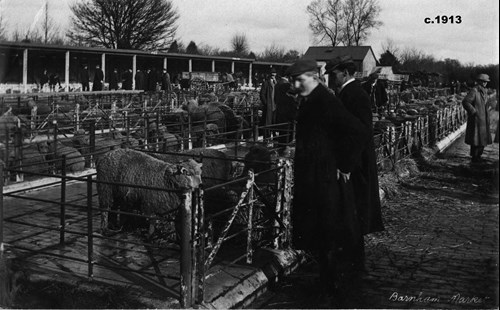 By 1910 the site covered some 2 ½ acres and included a large red corrugated iron cattle shed and open pens for sheep, pigs and poultry. In addition eggs, butter, cheese, rabbits, day-old chicks and eggs for hatching, fruit and vegetables, second-hand tools and furniture were sold in the market hall. After the First World War much of the produce came from the smallholdings which had been set up for returning servicemen. The Corn Exchange, where seed and corn were traded, was also in the market hall - the building that is remembered as Barnham Joinery that closed in 2012. This hall was also a meeting place for clubs and a place of worship for the local Methodists before their church was opened in Yapton Road in 1931.

The Monday market was a place to meet and to trade, a place of work and gossip. There were three major shows a year: The Barnham Christmas Fatstock Society show for cattle in December and two lamb shows at Easter and Whitsun. The prize animals fetched high prices as the butchers could exhibit the rosettes in their shop windows.

The Barnham Hotel/ Railway Hotel, situated next to the market and opposite the railway station (rebuilt in 1907 to accommodate the extra trade), reaped the benefit of the busy market by offering rooms, food and beverages to the visiting market-goers. Several agricultural stores and three banks opened to service the market trade.

During the Second World War, Barnham Market was a collecting point for livestock that was sold to the government for rationing. Mr Walter Stride was the collecting officer who would inspect and grade the animals with two other specially selected people – WJ Bennett, a Tillington farmer, and W Rapson, a Chichester butcher. The animals were sent for slaughter, usually to Chichester, Bognor, Littlehampton, Worthing, Brighton or London.

The market had brought prosperity to the area but the end of the war saw a sharp decline due to the preference of motor transport, refrigeration and post-war regulations.  Mr Fred Stride had died in 1938 and it was necessary for the company to close either Barnham or Chichester market.  Strides withdrew from Barnham in 1949.

Following the closure, the site was used for Langmead & Robinson’s fruit, vegetables and floristry business in the 1950s before being sold to Nurdin & Peacock for their ‘cash and carry’ warehouse in 1970. They were taken over by Booker in November 1996 and two years later the warehouse was closed with all trade moving to Booker’s cash and carry business in Chichester. Today the site is the residential Saxby Close.

There is a comprehensive chapter on Barnham Market written by local resident Mary Botting for the 1984 book ‘Barnham and Eastergate Past and Present’ that is out of print but is held at West Sussex Records Office ref: LIB9074.