Barnham Mill and the mill community 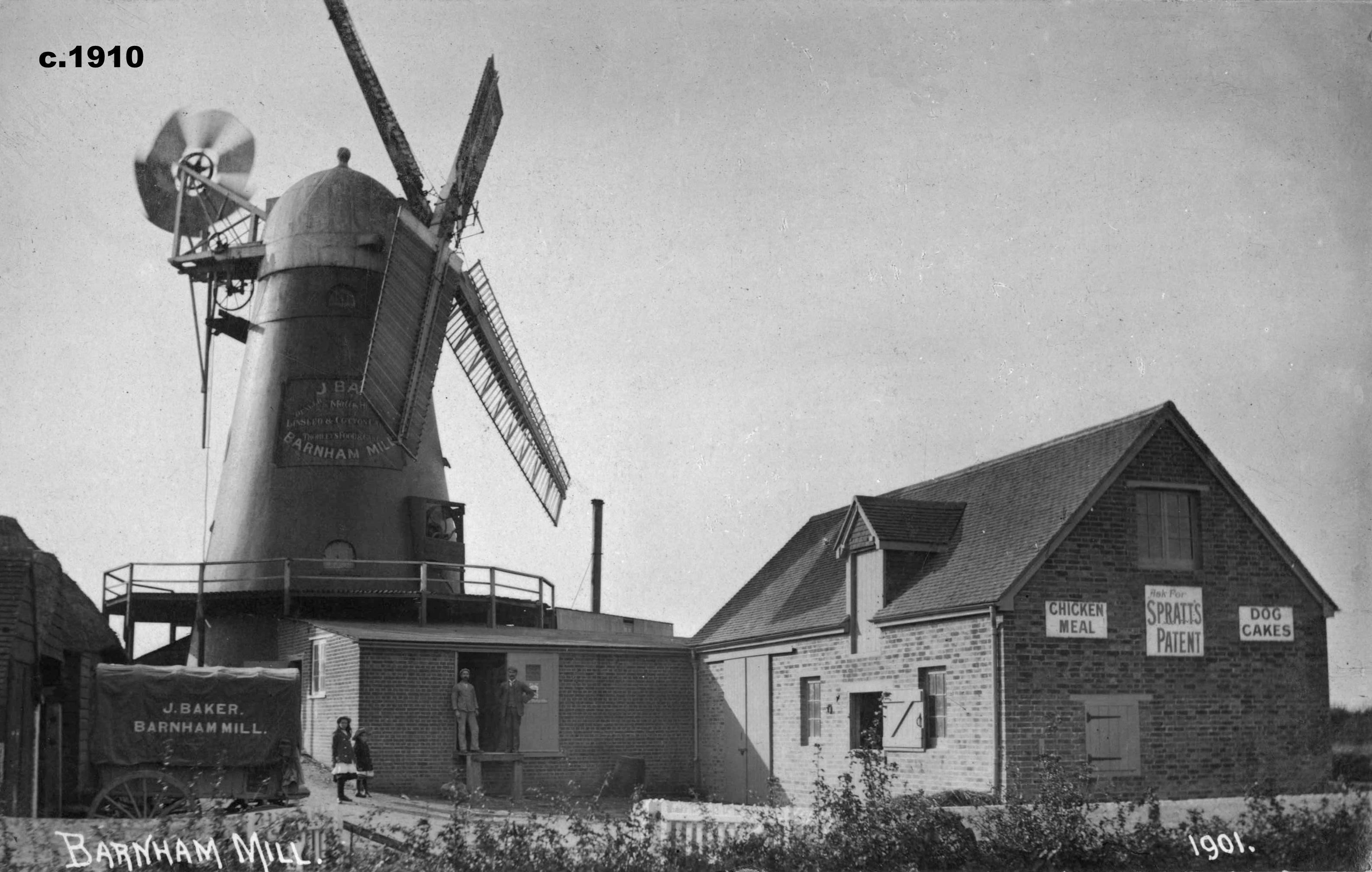 Barnham Mill and the mill community

A mill was recorded in 1086 but this was most likely a water or tide mill. 1155 sees the first mention of a windmill in Barnham and this may well have occupied the site of the current mill or close by. A post mill was blown down in a gale here on 11th October 1827 and the current four storey tower mill was erected in 1829 by millwright Henry Martin of Bognor. Unlike a post mill which rotates upon a central vertical post to face the favourable wind, only the top cap of a tower mill rotates.

The tithe map of 1846 shows Mrs Ann New to be the proprietor with the help of Richard Thomsett. Ann’s father-in-law was George New, the yeoman farmer who lived at Parsonage Farmhouse and her husband was also called George. Ann (nee Ware) and George, the miller, had married in October 1837 but sadly George died in 1843 aged 32 of tuberculosis. Ann continued to live at the mill or the neighbouring mill cottage until 1866 just 2 years after the opening of Barnham Junction Station. She sold the business to Henry Feaver, a master miller, who added 4 pairs of stones to increase output. Feaver sold up in 1879 and retired at the age of 70, just one year before he died.

And so began the ownership of the mill by the Baker family which would last for the next 90 years, instigating and witnessing huge changes in the business. Brothers Maurice (1850-1926) and John Baker (1855-1934) operated Barnham and Aldingbourne mills with William Hills, aged 38 in 1881, managing the day-to-day running of Barnham mill. The brothers were regularly seen at Barnham Livestock Market on Mondays at the Corn Exchange and generally chatting with the traders around and about. An 1886 advertisement describes the pair as “Millers and Bakers, dealers in malt and hops, linseed and cotton cakes, Aldingbourne and Barnham mills”.

The 1901 census conjures a vision of domesticity with John Baker and his family living at Mill House:

At the age of 16, Percy is already assisting his father while Leonard, 14, is working as a bricklayer. Having installed new larger stones and improved the sails, John Baker and his son Percy John Baker were running Barnham Mill together according to the next census in 1911. Sadly Percy was killed in action in 1915.

On the retirement of John Baker his son Leonard took over and on the death of his father in 1934, Leonard inherited the mill. Between the wars, local deliveries slowly transferred from horse and cart to motor vehicle. Shops were opened in Bognor and in Littlehampton bearing the name John Baker and described as ‘miller, hay, straw and corn merchant’ also selling a wide variety of animal feeds. In 1926 a 40 horse power Hornsby Gas engine was installed to power the machinery thus replacing wind and steam. The mill was now capable of producing one bag of flour per hour although flour was a small part of production, with the grinding of oats, barley and maize for animal feed taking over.

Cutten & May, in their book, tell of less usual uses for the Bakers’ flour including Harry Gilbert’s trips to the mill for one hundredweight of flour in a handcart for Brooks Nurseries in Barnham Road to paint over the glasshouses to keep off the sun and Colin Tiffin’s story of his father using the flour as wallpaper paste when he worked for 40 years for Harry Dart as a painter and decorator.

During World War II the mill was used as an observation post by the RAF. Until this time it looked virtually unchanged since its days as a windmill but then two of the sweeps became unsafe and had to be removed. By the end of the war, the wooden gallery had been taken down and there followed other parts that were no longer required and, at a time when preservation was far from the working man’s mind, the mill began to take on a neglected look.

Len Baker died unexpectedly aged 58 on 13th October 1945 at his home, Mill House. He was unmarried and had appointed two of his sisters, spinster Marjorie Baker and Mrs Dorothy West Barrett, as executors. They brought in their inexperienced young relative Reginald C Reynolds to run the mill with Marjorie manning the office. This proved to be a difficult task and in March 1946 the mill and other property were auctioned at The Dolphin Hotel, Chichester. Only Mill House was sold as the other property did not reach the reserve price and the three sisters with Reginald Reynolds decided to continue trading as John Baker (Barnham) Limited. Once again, the mill needed maintenance and updating if it was to be a viable concern. The old gas engine was replaced with a 30 horse power electric engine and the milling of feedstuff continued.

In the 1950s the final two sweeps and the fan stage were removed and the lead covering the dome was replaced with copper. The mill became a stark tower, no longer the romantic vision that it had once been. However, on the inside much of the ‘workings’ remained but sadly the mill would not be restored as the Society for the Preservation of Barnham Windmill worked so hard to achieve and today it has been developed for residential use.

Listed in 1849 as two tenements and gardens, this terrace was later extended to four and was used to house mill workers and farm labourers.  For example, in 1911 Joseph Zonell aged 46, corn miller, was living at No.4 with his wife Martha. Frederick Henry Greenfield, aged 28 in 1911, married to Maud, lived at No.1 Mill Cottages with his son, Edward, aged 2 and daughter, Letty, aged one. Sadly Frederick died in battle on 30th June 1916.

The tithe map of 1846 shows Mill House as it is today with the site of Windmill Cottage listed as ‘sheds and yard’. Next to the Mill was another dwelling (shown in a photograph circa 1890) that was later demolished and replaced with outbuildings. By 1910 Windmill Cottage could be seen resplendently white-washed hard onto the road next to the grander Mill House. All of these properties were owned by John Baker (1855-1934) and then his son Leonard (1887-1945) and formed part of the unsuccessful auction of the Mill in 1946 after Leonard’s death with only Mill House reaching the reserve.

In 1849 Old Mill Cottage was described as ‘tenement and garden’ suggesting that it was occupied by more than one tenant. Perhaps its best-known resident in later years was the artist Ronald Ossary (R.O.) Dunlop RA (1894-1973) who moved to the cottage in 1945 and lived there until his death.  Dunlop, born in Dublin, was a founder member of the Emotionist Group of painters and writers whose philosophy was that “The heart must govern all artistic work, not the head.  You must love what you wish to create.”  He sought to convey sombre moods in his paintings using tone rather than colour and was not to everyone’s taste but he continued to exhibit at the Royal Academy and his paintings were bought by the Tate and other galleries. He took commissions, wrote books and gave lectures and generally realised his ambition to make a living as an artist.

Why did he choose Barnham?  It was not for the locality which he describes as “just level land with nurseries, smallholdings and market gardens” but for the quality of light and convenience for the more interesting places especially the water and sky of Chichester Harbour.  He was a familiar sight in Barnham, travelling around by public transport and frequenting the Murrell Arms.  In Struggling with Paint, (pub. Phoenix House, 1956, WSRO ref: LIB 12379), he wrote “Eventually I decided upon my present abode – a small cottage in West Sussex, with a largish studio in the garden above a garage.  It has plenty of little leaded windows and wood boarding outside.  I do not use the garage for a motor car, but as a storage place for unsold canvases, frames, and other odd things.  Upstairs there is a nice, light, big room, a real workroom, not a conventional studio.  There is a large door at the far end which opens out on to a wooden balcony, with a splendid view of the market-garden fields and the far-off South Downs.  The effect of the windows on three sides and the height makes it rather like being on a ship on dry land, when one is up in the studio with the door open looking straight out on the surrounding flat landscape.”

Dunlop died in 1973 and for many years it was said that his ghost could be glimpsed supping at his usual table in the Murrell Arms. 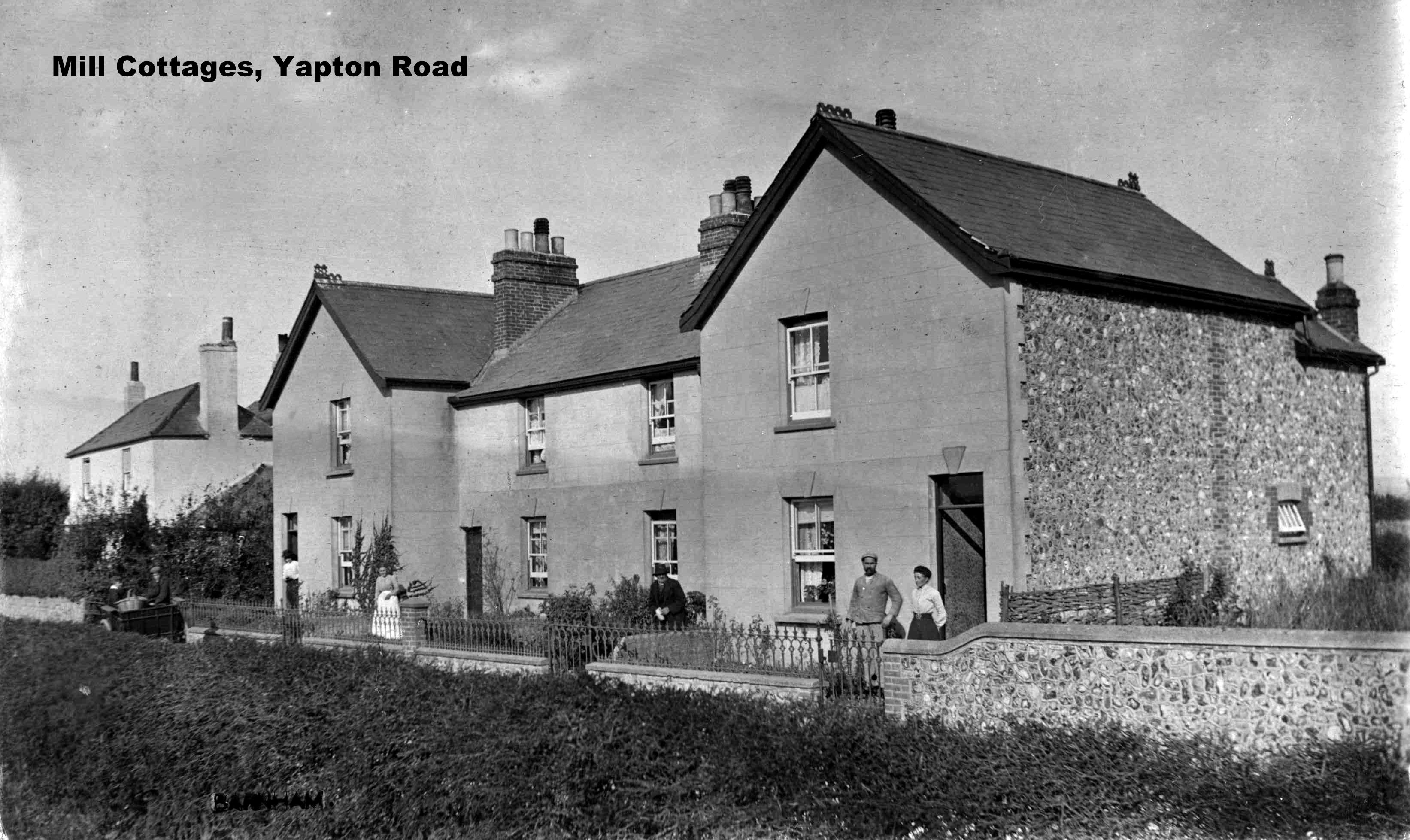