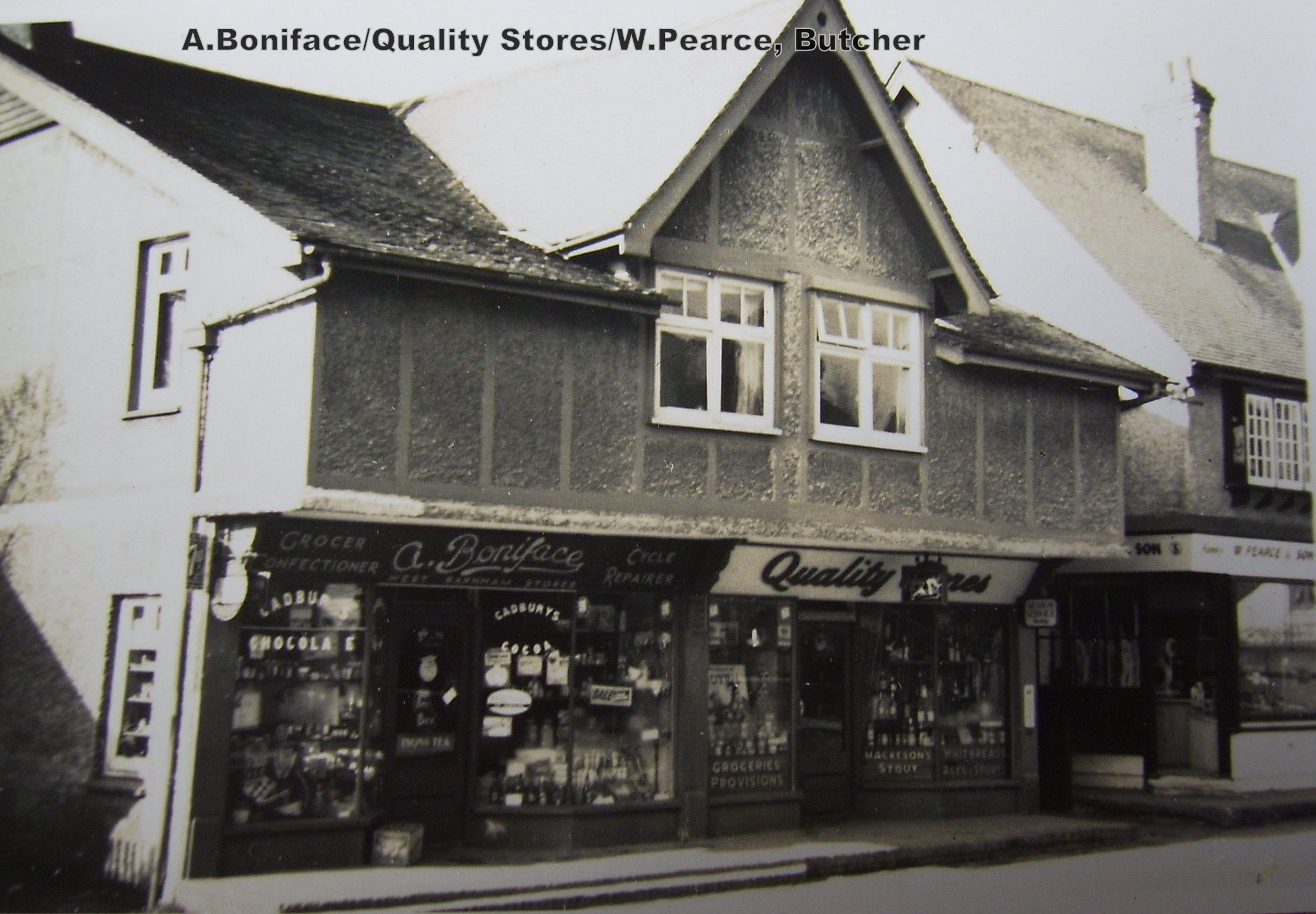 The following information is from many sources including Keith Evans, Colin Harding, Wally Pollington and Tony Budd.

Today there is a vacant lot where the petrol pumps used to be, next to that is an empty shop and The Lantern House Chinese take away. The Colgrave brothers also had a car showroom, repair shop and taxi business. In the Parish Magazine of March 1961 their advert describes them as ‘Morris Sales and Service, All Makes of Car Supplied’ and a ‘Car Hire Service’.

In 1910 Mr Syd Fiest built a wooden shop near to the current station entrance but soon moved into this purpose built shop. The business was eventually sold to CGA Gregory and then to W. Pearce. In the late 1950s Ken Evans bought the business from Roy Pearce, the son of W. Pearce, and by the early 1960s his son Keith was working with him. In 1969 the shop moved across the road to a larger shop that had once been Pains Ironmongers. (see Barnham Shops north side) Today, the premises are occupied by Barnham Tandori Takeaway.

No.41 was first occupied by Godleys Hairdresser. An early postcard shows a confectioners shop with the proprietor J. Moon. Then Tom Court opened a general store called Court Stores.  Tom Court can be seen in a photo of Chandler’s Post Office & Stores in Yapton Road, where he was an errand boy. The shop next door was built as a bakery but then became A. Boniface Stores, grocer, confectioner, cycle repairer. Both shops amalgamated and became Quality Stores. In an advert in the Parish Magazine of March 1961 the proprietors are WT Court and EN Court selling groceries, provisions, beers, wines and spirits. Quality Stores was taken over by Fine Fare and at the closure of that store the premises were divided. From the late 1960s No.41 has traded as Barnham Fishbar. No.39 has had various occupants including Raymond Dobson & Co Solicitors; Welby Dean Estate Agents; Halifax Estate Agents; and The China basket, gift shop. Today it is Barnham Health and Beauty.

This small road was the approach to the original station ticket office and station master’s house demolished in 1930 after the new station building was opened. In his memoir Harry Dart states:

“The National Westminster and Lloyds banks were built by my father in 1933 and the following year he added Hall & Co’s building supplies and coal office.”

The National Westminster Bank was known before the 1960s as Westminster Bank. In 2016 it is no longer open to the public but the bank still retains the premises and maintains an outside cash machine. Since the closure of Lloyds Bank in around 2010, the premises have become the Parish Office for Aldingbourne, Barnham and Eastergate churches and known as ‘The Church in the Market Place’. There is no longer a bank in Barnham where once there were three but there are two cash machines (a second machine is outside the Co-op) and cheques may be paid in at the Post Office in the Trading Post.

Hall & Company were taken over by Corralls. An estate agent followed, and today it is a gift shop called ‘Country Cottage Gifts and Interiors’. The address is now 37 Barnham Road.

Estate agents have come and gone, with just one now in Barnham, a local agent called Hobdens.

The photograph on the right, taken on the opening of K.J. Evans, Butchers in 1969 (see Barnham Road shops north side), shows on the opposite side of the road: ‘Eve’s’ (wools, knitwear, nylons, lingerie, children’s wear, haberdashery), and Dorothy Siems (Estate Agent for properties in Barnham and surrounding areas, Bognor Regis and Chichester).

In his memoir, Harry Dart remembers when Alfred Pain Ltd Ironmongers (High Street, Arundel) had a branch in the wooden premises before moving across the street in 1946 to a new shop which was later adapted and occupied by K.J. Evans.  Alfred Cortis, Corn & Seed Merchants also traded from there pre-war. Both wooden shops have now been demolished.

Frank Earley opened his first butcher’s shop in Barnham in Lake Lane opposite Parsonage Farmhouse.  (The premises were eventually demolished to make way for new shops with flats above, occupied today by Mace newsagents and minimarket.)

Frank moved to the newly built shop in Yapton Road in the 1930s.  According to the Register of Electors, the residential part of the premises, called Broadlands, was let by 1935 to Cecil A. Kinchett and Kathleen Kinchett.

Frank was succeeded by his son, Morris.  Then, in 1986, the business was sold to the current owner, Tony Budd, who has continued the name and traditional personal attention of the original village butcher.