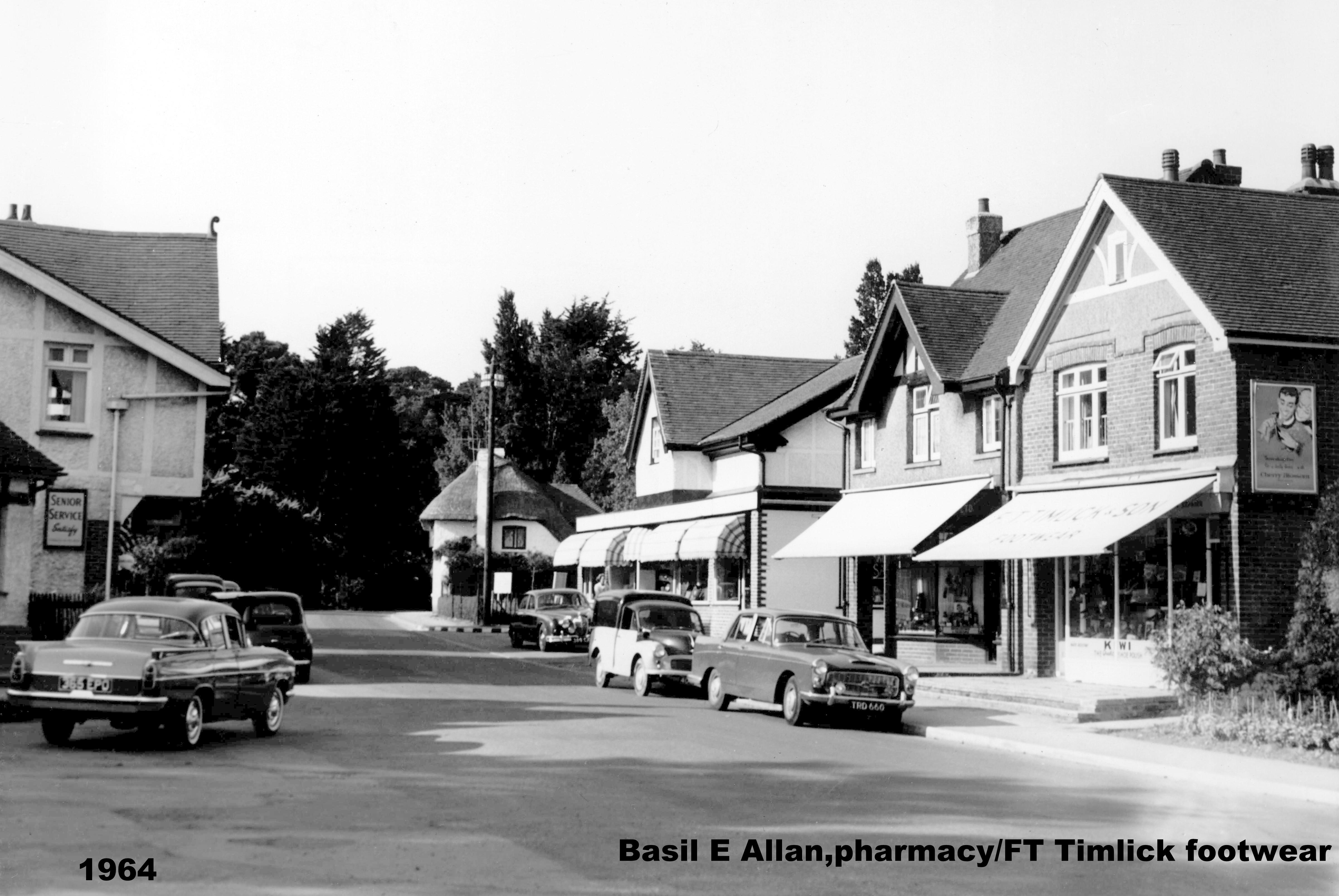 The following information is from many sources including Keith Evans, Colin Harding, Trevor ‘Jacko’ Jackson and Arthur Timlick.

Built in the 1920s, for many years these two shops were a boot repairer and a chemist.

Number 62 was originally operated by Mr Fred Jones who sold the business in 1932 to Frank Timlick trading as F.T.Timlick, Footwear Retailer & Repairer. Frank Timlick was a well-known local character who had worked with leather since leaving Eastergate School at the age of 12.  His first job was with Mr Bill Walling, saddler, harness maker and boot repairer, at Barnham Road, Eastergate.  After 17 years as a harness maker, Frank opened a boot mender’s shop at Middleton-on-Sea before taking on the Barnham shop. On his marriage to his wife Linda, he moved into No.1 County Council Cottages (now called Hall Cottages) in Barnham Road, Eastergate.  During World War II, Frank was a member of the Home Guard and his young son, Arthur, was a runner for the group.  Frank was full of friendly banter and a great authority on many things.  His son, Arthur, continued in the same manner as his father until his retirement in 1997 when the shop closed.  It is today ‘Barnham Barber Shop’.

When Frank Timlick began in Barnham in 1932, the shop next door at number 64 was already trading as Basil E Allan Ltd, M.P.S, F.S.M.C., F.B.O.A., Chemist and Optician. Described in an advertisement in 1967, the shop provided ‘medical and surgical requisites, patent medicines, photographic and high-class toilet supplies, including Innoxa, Old Spice, Coty & Helena Rubenstein.’  The shop is now Hobdens Estate Agents.

The trees on the left were planted in 1935 for King George V Silver Jubilee by the Eastergate British Legion.

By the time the above photograph had been taken Alfred Pain, Ironmongers, had moved across the road from a wooden shop to purpose-built premises. Alfred Pain also had a shop in Arundel and a photograph of that shop shows it overflowing with household goods. By 1969 when KJ Evans, High Class Meat & Poultry Specialist had moved across the road from No.43a, the shop had been divided. See also ‘Part II Barnham Road shops (south side)’. Evans the butcher traded, both father Ken, and son, Keith until 1969 when the business was sold to Andy Rocher. Today it is the Barnham Chinese Take-Away.

The other part of the ironmongers became a general store called Lamb & Selman. This shop had moved from the old Post Office & Stores building in Yapton Road. The Post Office moved here from The Poplars, Yapton Road. (The Post Office was later incorporated into Alldays, part of the new shops built on the site of the Barnham Nurseries HQ, currently The Co-Op, then it occupied the old Barclays Bank premises and at present it is to be found in the Barnham Trading Post.) The Lamb & Selman shop has had various occupants including a florist run by John Young in the early 1970s, 4 Spice, drugstore, photography and gifts, and, a bakery shop of various owners and trading names, currently Baps’n’Buns.

Next to the Ironmongers was a purpose-built bank which many villagers remember as Barclays. It has had many occupants over the years including several estate agents: Tregears, Barratts and Prudential to name three. The Post Office, see above, was also here until 2015. Today it is part of the Shore Financial Services offices.

Originally the Corn Exchange attached to Barnham Market (which closed in 1949), the building next to the Barnham Bridge Inn has served as a community hall, a market hall for the sale of fruit, vegetables and flowers for Langmead & Robinson of Eastergate, and the sale of feed, grain, etcetera under the Sussex County Agricultural Trading Society (SCATS). Bought by Mr William Taylor (known as Reg) the premises became Barnham Joinery. Reg Taylor moved from London and built houses in Halliford Drive, Oriel Close, and several houses in Elm Grove and Downview Road. As he was a builder he stocked the shop with the materials and tools required for his trade to save the trip to Bognor for supplies. The shop developed into a village hardware store, stocking all and sundry, and was taken over by son David when Reg died in 1998. Over the years the premises were sub-divided and incorporated such diverse businesses as a newsagent, betting shop and solicitor. The shop closed in 2012 with part of the large premises becoming D&D Cycles and part occupied by Shore Financial Services.

The shop by the railway bridge

The premises are situated on a busy junction where Lake Lane meets Barnham Road.  The building was erected long ago when the road was a quiet lane and there were more pedestrians than car drivers.  According to Harry Dart, in his memoir, the premises started around 1910 as a single timber-built shop on the railway embankment opposite the hotel – that is, before the station ticket office was relocated.  Within a few months it was moved to its present position and Mr Syd Fiest, butcher, ran the shop until he moved his business to new purpose-built premises at 3 Station Approach (now 43a Barnham Road).

In 1919, the shop by the railway bridge was a fish & chip and wet fish shop ran by Mr Ron Bradley.  An additional shop was attached in 1925 and this was a gents’ barber shop with Mr H. Stevens as proprietor.  By the early 1930s, the business had been taken over by Mr Cresswell who later moved to a new detached shop at 49 Barnham Road catering for both ladies and gentlemen (occupied today by The Five Villages Pharmacy).

Mr Lionel Jey and his wife Nellie opened a newsagents, tobacconist and confectioners shop next to the barbers in 1959.  After Mr Cresswell vacated, his shop remained empty and eventually the Jeys took over both parts, converting them into one shop.  For 21 years they rose at 5:30 a.m. and never took a holiday to ensure that the papers were delivered. The shop is now occupied by Robinson’s Garden Machinery. 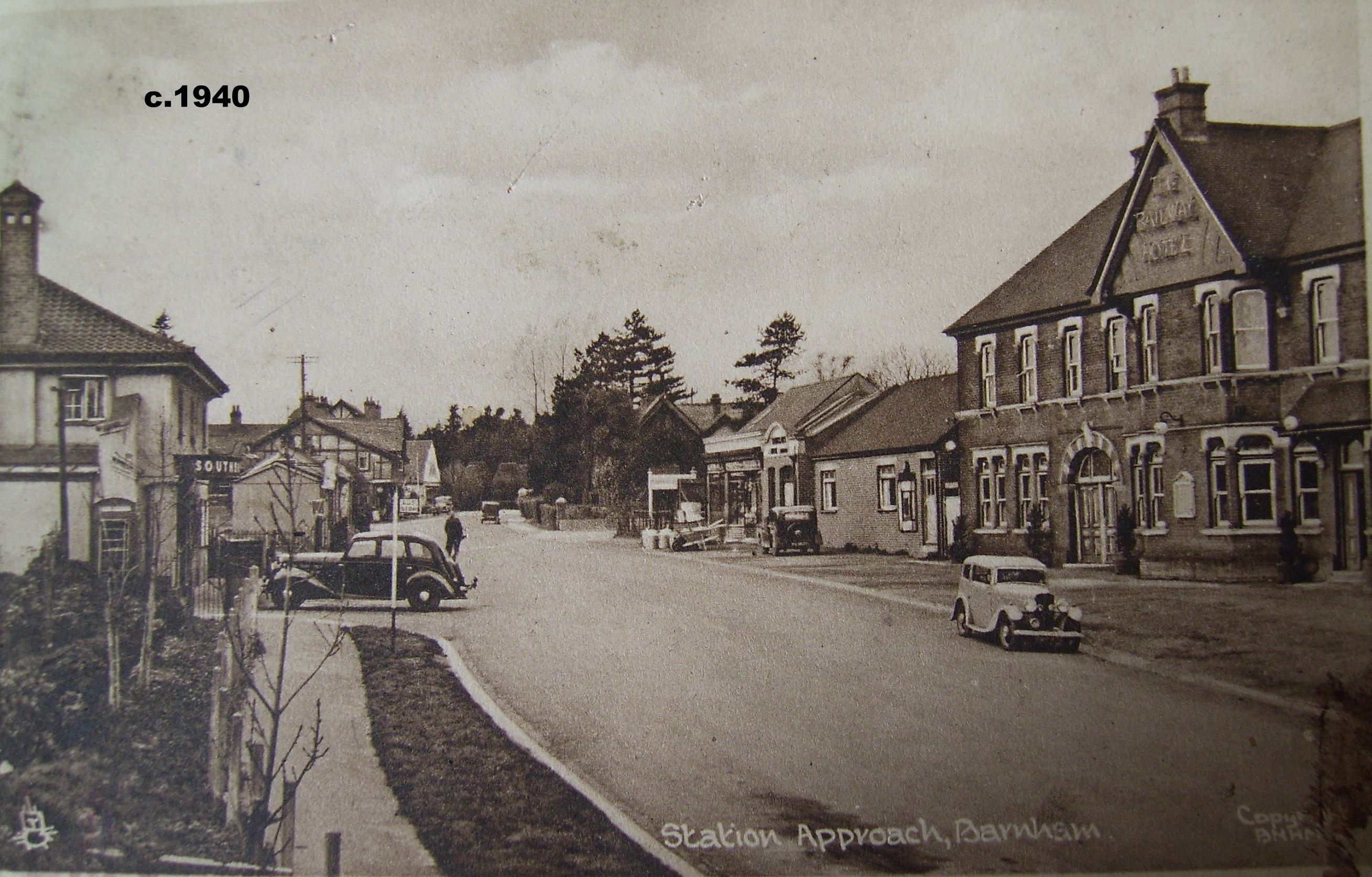