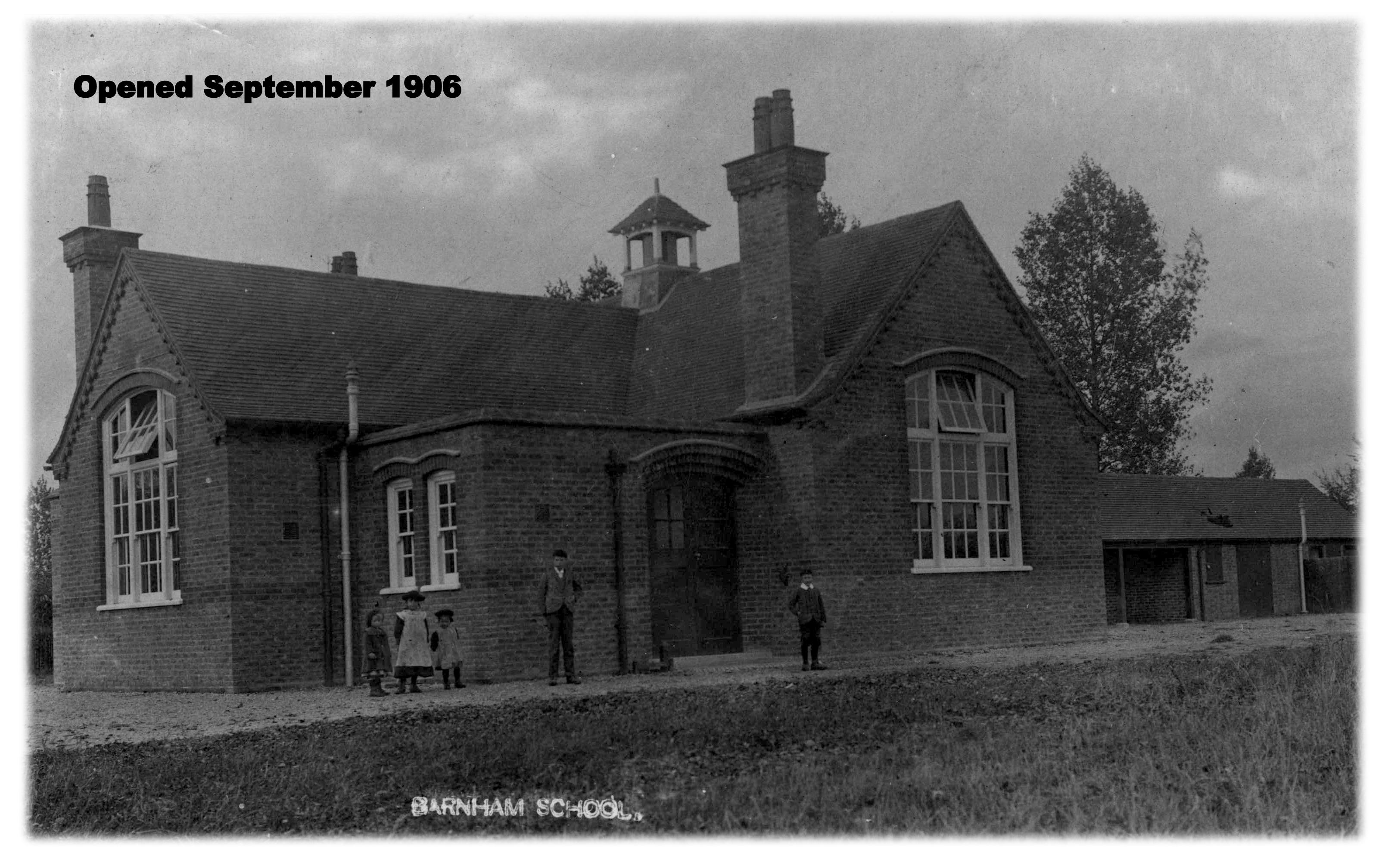 Barnham children fortunate enough to attend school had to walk to Eastergate village where there had been a National School since around 1830. The school had been founded by the National Society for Promoting Religious Education to provide elementary education to the children of the poor based on the teachings of the Church of England. Set up in 1811, the aim of the Society was to have a school in every parish but one in Barnham did not materialise and at times the Eastergate school struggled to stay open due to a lack of pupils and staff.

As Barnham village grew and the number of children increased, it seemed appropriate that Barnham would have its own school at last but there was surprising opposition to the scheme which was first broached by the Parish Council in 1895. William Chandler in his 1949 history reports that “One farmer said the only thing the children would learn would be to ‘swing on gates’!”  And, of course, the local ‘rates’ had to rise to pay for it. However, in 1905 a plot of land in Yapton Road was purchased by the County Council from Barnham Nurseries and building work began.

Two young Barnham lads, Harry Dart and James Walder both born in 1899, and who had walked to the Eastergate school from a very young age, were amongst the 59 pupils attending the opening of the new school on 5th September 1906. (Harry Dart says 36 children, William Chandler in his 1949 scrap book says 59 and another account refers to 59 with 29 of those in the Infant class – memory is not always accurate) The new school was a modern building with two classrooms, exercise books instead of slates, pencils and pens with ink. Outside the classroom the boys and girls were separated by a fence in the playground and in the covered play-shed which was used in wet weather. The headmistress was Miss Mary Bradshaw and her sister Isabella looked after the Infant Class.  As there was no schoolhouse the sisters rented a house in Church Lane. Sadly Mary Bradshaw died in 1916 and there followed:

Mr Hooton is fondly remembered by many villagers who attended the school before 1965 when Mr Hooton died suddenly at his home in Marshall Close. He was known for project-based learning which involved the children investigating, researching and interviewing as a way of encouraging interest and self-expression. The school set up the Barnham Broadcasting Corporation(BBC) with tape recorded programmes devised by the children, including interviews with local people, broadcast to other parts of the school. The work of the school was widely covered by the media at that time and the methods were studied by educationalists.

The school had been built with very little outside space for sports and links were forged with Barnham Court House and Farm where the Forse family allowed events such as the Annual Sports Day to take place. In the late 1940s there was a Young Farmer’s Club to which many of the children belonged and photographs show the popular Gardening Club in the 1920s. All these pursuits encouraged the children to become involved in and knowledgeable about their local rural community.

In 1968 with 115 children on roll it became clear that the accommodation at Yapton Road was at its limit and the site too small for modern needs. A new site was sought and land was purchased by West Sussex County Council in Eastergate parish within the postal area of Barnham to accommodate the Infant Class children but retaining the Yapton Road site. Further building work followed until most but not all children were based at Elm Grove and the three classes at Yapton Road (two classrooms in the grounds and one in the main building) with no sports facilities, had to be bussed to Elm Grove once a week for Physical Education. This unsatisfactory situation prevailed until 2000 when the Yapton Road annexe was closed and sold for housing following the enlargement of the school at Elm Grove to take all the pupils.

The new school was built in the orchard of a house called Woodcot (now March House). The house was built by West Barnham Estates in the grand Edwardian style favoured by that company. It was the first house to be built in the extended lane called Elm Grove that was no more than a track and which formed a junction with another track, Downview Road. The first resident was Edward Hartley who produced mushrooms in a huge shed in the field behind the house.

By 1920 Woodcot was owned and extended by the Wentworth family: Herbert Wentworth, his wife Katherine, son Herbert and daughter Dorothy. Mr and Mrs Wentworth died in 1942 and 1941 respectively and are both buried in St George’s Church, Eastergate. Herbert junior married Enid Collins, daughter of the local doctor John Boniface Collins who lived at The Pines, Barnham Road (now Abbey Dean, a retirement home). The couple lived for many years at 99 Barnham Road. Dorothy remained a spinster and continued to live at Woodcot although much of the land was sold. Wentworth Close, part of the nearby housing estate, is named after the family and the road to the front of the school is named Orchard Way.

To view short video clips of the Barnham School in action in 1957, visit www.britishpathe.com and search for Barnham.

The Barnham Primary School is now part of The Oak Academy Trust and the school’s website is www.barnhamprimaryschool.co.uk

For photographs – follow this link to Flickr  where you will find many images of Barnham School through the ages. (Flickr is an external site where images are hosted).