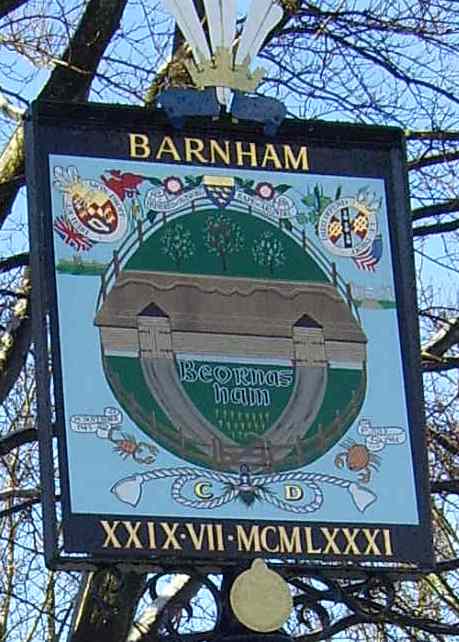 Barnham lacks a conventional village green but a small triangle of land at the northern end of Church Lane at its junction with Yapton Road between the Murrell Arms public house and Luccombe Cottage has become a place of commemoration.  Mervyn Cutten, local historian and the landlord of the Murrell Arms from 1964 to his death in 2006, was the driving force with funds being raised by raffles at the pub.

An ornate sign commemorating the marriage of H.R.H. Prince Charles, the Prince of Wales to Lady Diana Spencer was unveiled by the writer and broadcaster, Bernard Price, on 1st July 1982 to celebrate Princess Diana’s 21st birthday and the birth of Prince William.  The sign was painted by the artist Anthony Tiffen who was originally from Barnham.  It shows the thatched Tithe Barn at Court Farm, thought to be the largest in Sussex, and demolished in the 1960s.  The apple, pear and cherry trees represent the local fruit farm.  Beneath it is a lovers knot with the initials C.D. also a Welsh love spoon and a gold wedding ring. The coats of arms and many symbols of the two families can be seen. The date of the marriage (29th July 1981) is in Roman numerals.  At the top are the Prince of Wales feathers.  On the reverse of the sign is the following inscription:

The sign is suspended on a Victorian lamp column, inside of which is a time capsule.  At its base are decorative Victorian tiles, copies of Chichester Cathedral medieval floor tiles, to show that Barnham is under the jurisdiction of the Bishop of Chichester.

The finger sign, below and to the rear of the village sign, shows two views of St Mary’s Church.  They were originally painted by Dorothy Treweeks (1885-1957), repainted by Mary Cundell in 1974 and further restored in 2010.  There are also two metal picture signs pointing to Barnham Mill and the railway station.

Five large wharfstones, from the disused canal which runs through Barnham, placed in the form of an ‘E’, commemorate the 80thbirthday of the late Queen Mother in 1980.  The liberation of the Falkland Islands in June 1982 is marked by a pinnacle from the Chichester old market cross and the births of the Princes William and Harry are recorded on a hop scotch pavement.  The large copper beech tree was planted in 1964 by the late Alan Fradd, Director of Croftway/Toynbee’s Nursery, Yapton Road.