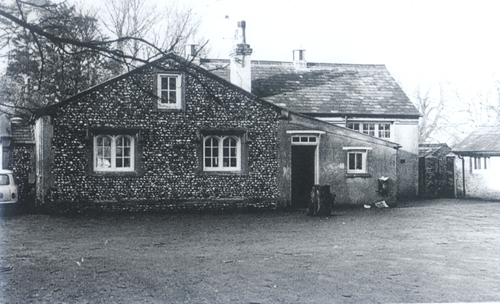 Eastergate was predominately a farming parish and as such the children in the past had little opportunity to go to school or to learn to read or write.  However, it is thought that a school stood in School Lane in the 1830s.  The school had been founded by the National Society for Promoting Religious Education to provide elementary education to the children of the poor based on the teachings of the Church of England. Set up in 1811, the aim of the Society was to have a school in every parish but Barnham, for instance, did not have a school until 1906 and that was built by the County Council. Even with a large catchment area, Eastergate School was often closed through the lack of a suitable master and children were often absent helping their parents. Indeed, in 1837 the first school log states that it reopened with 4 pupils under Edward Lulham, a certified master.

Harry Dart (1899-1983) remembers walking daily to Eastergate until the Barnham School opened. Here is an extract from his memoir :

“As I was living previously in West Barnham I had my first schooling at Eastergate – a very old building in use since 1836 – and under a much-loved headteacher, Mrs Harvey, I had good basic instruction. We had only slates for writing and no individual reading books. Each morning we opened the school with prayers and a hymn conducted by the Rev. Mr Fraser, whose Rectory was nearby, before and after the “dinner” break we sang “grace” to the tune of The Old Hundredth, our hymns and songs being accompanied by the teacher upon a squeaky old American Organ. Those of us who brought sandwiches, living some distance away, ate them sitting round the Tortoise coke stove.”

In 1901 Hilda Ruff was born at Homeleigh, Church Lane, the youngest daughter of Rubin/Reuben Ruff who sold fruit and vegetables in Eastergate. Hilda attended Eastergate School and when she grew up she was the teacher there for 15 years. She married Mr Stanley Bennett, a local builder, at St George’s Church in 1926. They lived for many years at Mandalay in Church Lane. We know this because their son, Roger, presented a scrapbook to Eastergate parish in 2000 which contains information and photographs of his mother at the school. The book is held at the Parish Office in Barnham (The Church in the Market Place).

In 1912 Eastergate School was updated and there are plans at the Records Office in Chichester (ref: PAR 7625/1) which include the building of new toilets (outside), enlargement of the windows and extra outside space – gravel and paving.

In 1970 with Mrs Doreen Brisland as headteacher, the school moved to new open plan premises in Church Lane. There were by now 100+ pupils and three teachers who had completely outgrown the old school. In the local newspaper, the West Sussex Gazette and South of England Advertiser in February 1970, Mr Michael Ridger, deputy director of education for West Sussex County Council said “The old school is a nasty building. On the other hand, it is a first-rate educational institution, which produces some quite extraordinary results.”

The old school building is now a private residence.

For more images follow Right Click of your mouse to open Flickr link in a new page where you will find many images of Eastergate School through the ages. (Flickr is an external site where images are hosted).

Short film clips of the old and new schools can be found below.