Further information can be found in ‘The Parish Hall Adventure 1907 and 1908 in Eastergate and West Barnham’ compiled by Susie Peters, based on contemporary issues of the Chichester Observer and West Sussex Recorder, published by Eastergate Parish Council 2007 to coincide with the centenary of the hall. (WSRO ref: MP5648)

The story begins in March 1907 when Major H Jellicose, Honorary Secretary of the County of Sussex Rifle Association, wrote a letter to the Chichester Observer concerning the need for a rifle range in the area to train young men in the event of a national emergency.  In response, on 12th May, Alfred Day, the racehorse trainer who lived in Arundel Road (now the A27, Fontwell) and the Reverend William Yoward of Eastergate Parish, called a meeting in the Corn Exchange, West Barnham, next to the Barnham Bridge Inn (now Tesco Express).  Alfred Day was a member of the Sussex branch of the Territorial Force Association.  It was decided that a new rifle range would serve Aldingbourne, Barnham, Boxgrove, Eartham, Eastergate, Shripney, Slindon, Walberton and Yapton.  Eastergate was chosen for its central position.  Two representatives from each parish were invited onto the committee with Alfred Day as Chairman and Sydney Marshall of Barnham Nurseries and the West Barnham Estates as Treasurer. 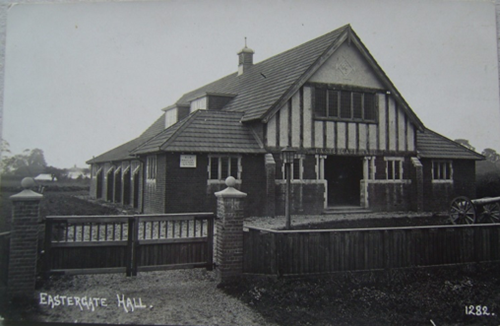 In September of that year a contract was signed with the local builders West & Dart for a public hall and rifle range.    The finance was provided by Reverend Yoward, Alfred Day and Captain Orr Ewing of Aldingbourne House.  The architect was Mr A Silley of London and the hall was opened by Lord Talbot MP in 1908 at a cost of some £2000.  Of the opening Harry Dart, son of the builder WH Dart, says: “I well remember the opening ceremony when a company of London Artistes entertained the mothers and children in the afternoon and followed with a Grand Concert in the evening with dancing and jollification until 2.a.m” Harry would have been 9 years old at the time. The local paper reported “There are 8 double gas brackets with attractive shades giving a bright soft light. At either side of the stage is a bronze statue holding a light aloft.” Lavatories and cloakrooms had been provided.

The hall had taken much longer to complete than expected and this may be due to the ambitious scheme to install paintings of scenes from Sussex history around the walls.  They were painted in oils on canvas fixed to the plaster walls.  Some were painted by Byam Shaw (1872-1919), a prolific artist and illustrator, influenced by the Pre-Raphaelites with whom he was acquainted. His notable works include murals in the corridors of the Palace of Westminster. He died aged 46 in the influenza epidemic of 1919.

The murals were paid for by Alfred Day who had a keen interest in history.  Copies of receipts and correspondence can be found at West Sussex Record Office ref: MP 813. According to the author Jim Beavis, the hall proved to be a financial burden and the deeds of the hall were taken by the bank as collateral for Day’s overdraft.  Day tried to sell the hall but it remained in his family’s ownership until after 1945, Alfred Day having died in 1935. (Beavis, Jim, The Days of Fontwell, 2011)

The murals were restored in 1977 by Pagham restorer Arthur Baker and Eastergate artist Dennis Frost. In a newspaper report (The WS Gazette & South of England Advertiser) in November 1977, Mr Frost explained that it “would take the two artists about two years to complete, with breaks in the summer for their own work.” It was likely to cost about £800. Bullet holes were found in some of the canvases, reminding the restorers of the original purpose of the hall. Mr Frost’s theory about the thinness of the paint on the murals was that the hall cleaning ladies had been over zealous with their use of Vim!

The aisles have long since ceased to be used for the rifle ranges and the hall is now run as a charity as the Eastergate Village Hall with no connection to the other parishes.  The Boer War canon was last fired in 1911 to celebrate the coronation of Edward VII and was sent for scrap in 1940 to help the war effort.

Since 1977, Eastergate Village Hall has hosted every January the annual pantomime staged by the Eastergate Players. For further information, visit their website at www.eastergateplayers.org.uk.