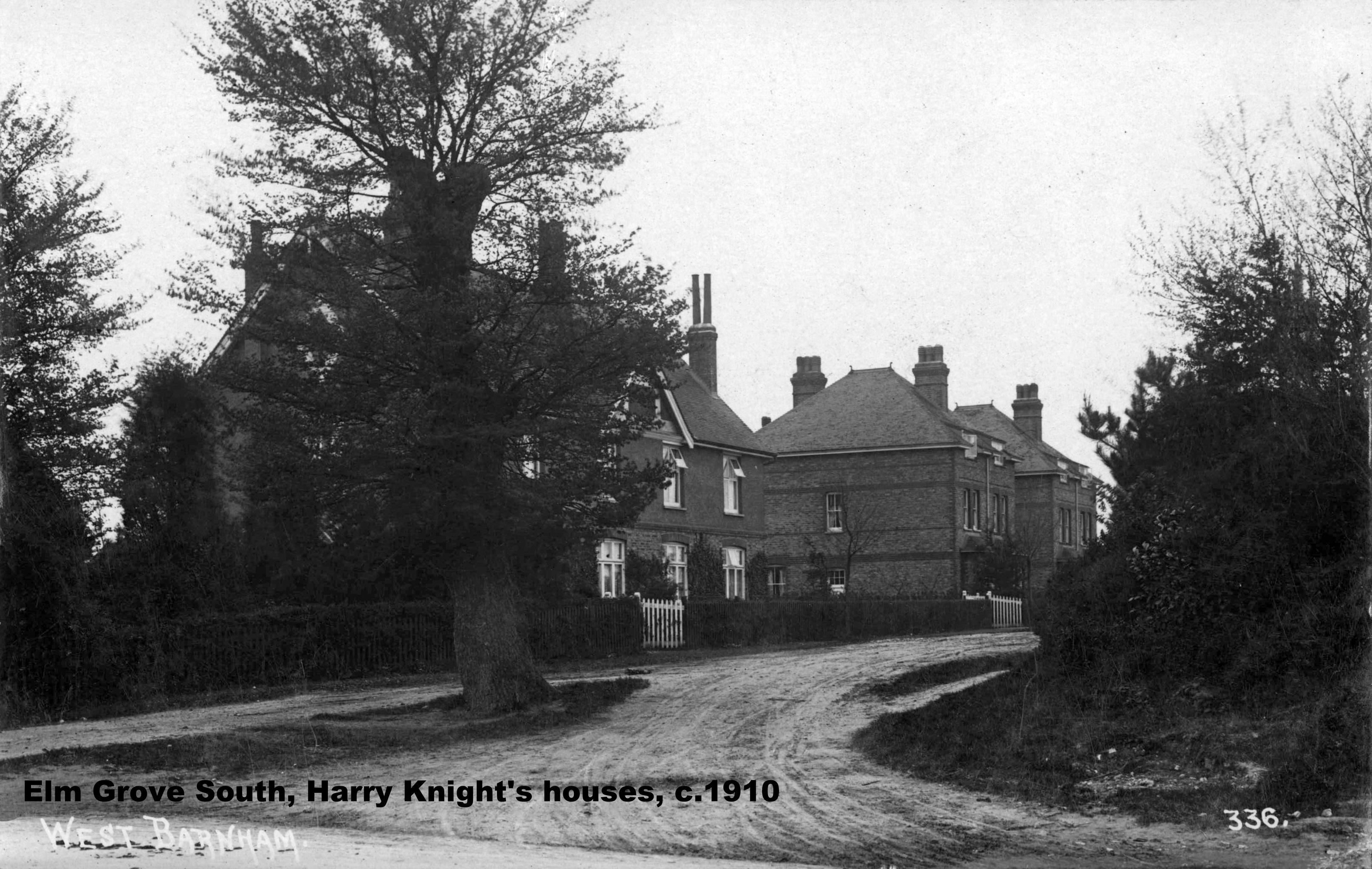 Listed in the Inland Revenue accounts of 1910 was a brickyard in Elm Grove South in the ownership of West Barnham Estates. A sketch map from the papers of the late Colin Harding shows two entrances, one off Elm Grove South and one through 101 Barnham Road. The brickyard, along with another at Yapton Road where Dunora Cottages are today, provided bricks for the housing boom in the area at that time. An invoice at WSRO ref: AM 348/11 to a Mr Gadd of Westergate is for the supply of 400 bricks on 4th April 1902 for 10/6. At its close in 1950, the brickyard was run by G and CH Stevens.

Harry Knight, see below, bought land at the end of Elm Grove South nearest to Barnham Road and built several larger houses there when the road led only to the brickfield.

In a nearby field was a World War II aircraft dump. In 1959 the St Philip Howard Catholic High School was built on land that had formed part of Eastergate Manor Farm owned by the Ecclesiastical Commissioners and by 1965 an estate of houses had been built.

In 1901 Harry Knight was a coal merchant and licensee of the Railway Hotel (before it was rebuilt).  He was 43 years old and lived with his wife Sarah, and three sons, Percy 11, Charlie 9, and Frank aged 2. Harry Dart, in his memoir Harry Dart's Memoir [pdf] 5MB, tells us that between 1902 and 1905 his father, William Henry Dart, a local builder, worked for Harry Knight building two blocks of four cottages, on land that Knight had bought in Elm Grove. They were called Fishbourne and Tisted Cottages (Harry Knight had lived in Fishbourne and perhaps he had family connections with Tisted, the Hampshire village). These were very different from the detached houses favoured by Sidney Marshall and his company, West Barnham Estates, being workers’ cottages for rent and not for sale. In 1910 the Inland Revenue also lists Harry Knight as the owner of Elm Lodge and Broad Oak in Barnham Road which he was letting and he was living at Bentworth (now modern flats). It would appear that Harry Knight the publican saw an opportunity towards the end of the 19th century in up and coming Barnham to branch out into property development and make, if not his fortune, then certainly a comfortable living. He was elected to Westhampnett Rural Council, served on the Highways Committee, and was the representative for Eastergate on the Board of Guardians which dealt with payments to and accommodation for the poor. More information about the Knight family will be found in the section on St George’s Church, Eastergate.

The young Harry Dart aged only 3 or 4 moved with his parents into No.1 Fishbourne Cottages. His father had a carpenter’s workshop in the garden which later became a shoemaker’s shop that was owned by Bert Boniface. WH Dart left Harry Knight’s employment in 1905 and formed a partnership with local bricklayer, Harry West. The pair built many houses in the village and also the village hall at Eastergate. They were employed to build houses at the northern end of Church Lane and on completion the Dart family moved into Bankside where William and his wife lived out their days. On his marriage, Harry moved into Moreton next door to his parents.

The new Barnham Primary School was constructed on the orchard of a house called Woodcot that was built by West Barnham Estates in the grand Edwardian style favoured by that company. It was the first house to be built in the extended lane called Elm Grove that was no more than a track and which formed a junction with another track, Downview Road. The first resident was Edward Hartley who produced mushrooms in a huge shed in the field behind the house. 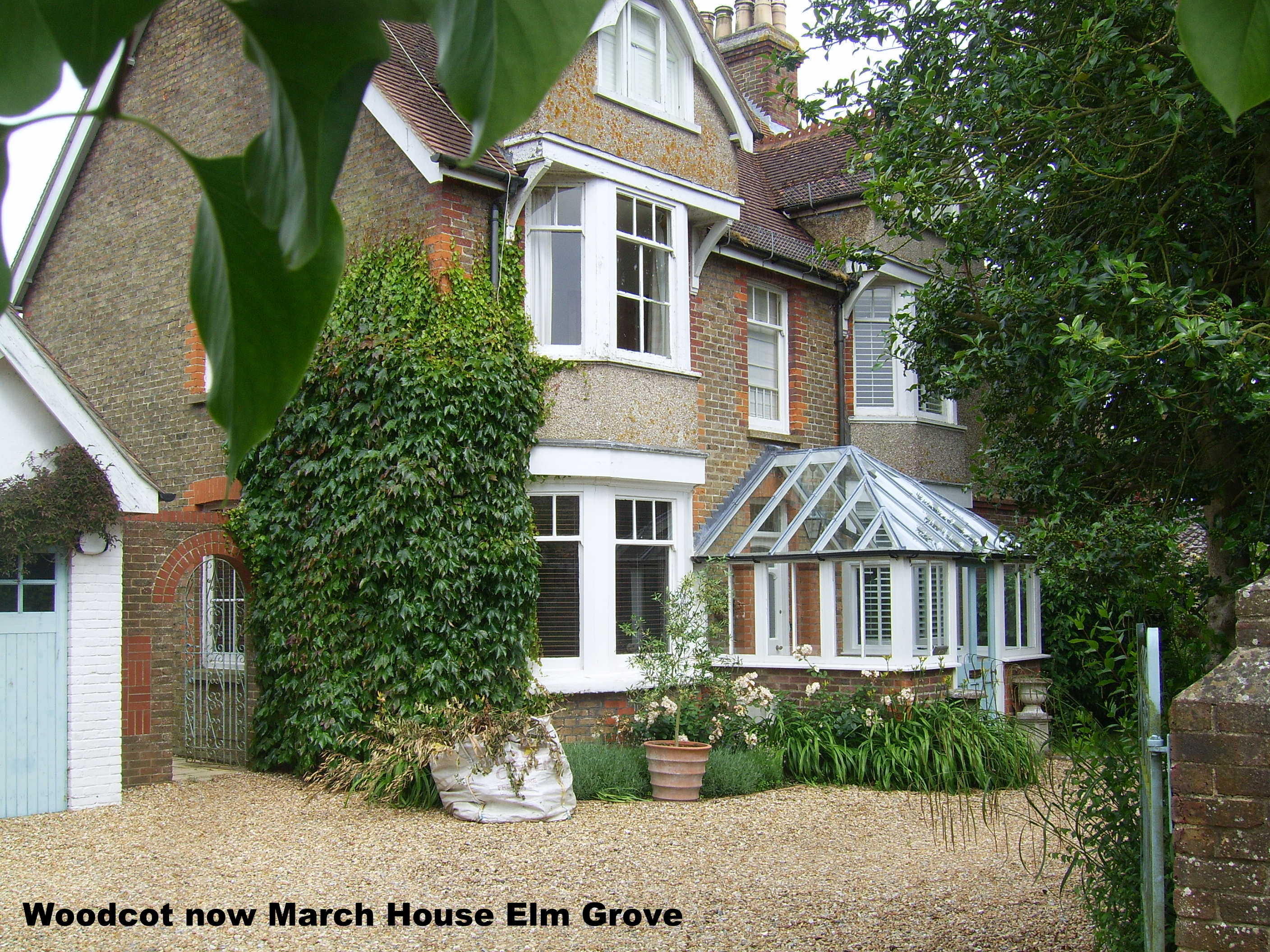