Manor Farm, the Robinson family and the Helyer family

Manor Farmhouse is a Grade II listed building dating from the 16th century. It is timber framed with infilling of red brick, plaster and flint. The manor of Eastergate was held from Norman times by the Nunnery of St Martin de Seez, Normandy in the gift of Earl Roger and later by the Nunnery of Sion. At the dissolution of the monasteries, the manor was seized by the crown. In 1560, around the time when the farmhouse was built, the manor was held by the Dean and Chapter of Chichester and was transferred to the Ecclesiastical Commissioners in 1860. Comprehensive records can be found at the West Sussex Records Office and at the Church Commissioners in London. Hudson, Hillebrandt and Morrish in chapter 8 of the book ‘Barnham and Eastergate Past and Present (1984) set out detailed research with references. 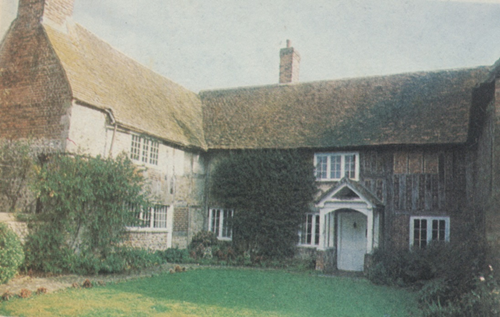 The manor court met annually at the farmhouse and it was a condition of tenure that a room and board for the officers was provided.

Intriguingly, Mr JH Robinson interviewed in 1935 for an article in the Southern Weekly News, described how a secret room was discovered on the top floor when a section of the old house was demolished. He said “I was amazed when I found it out. I have lived in the house all these years and never knew it was there. I should imagine the room was used for punishment. One of the beams has been burnt and I should imagine that a Nun tried unsuccessfully to burn her way out of the cell.” A fanciful interpretation indeed. He also disclosed that a paper ball and a woman’s silk slipper were found under floorboards.

In 1969, Mr Robinson’s daughter, Ann wrote: “Eastergate Manor is an old Tudor farmhouse, it is large, timbered and makes an ‘H’ shape on the ground. It is next to the Church and the farm buildings of Manor Farm around the church. [On the hand drawn plan of the house is an ‘X’ with the explanation:] ‘X’ in the plan marks the spot where there are papers hidden in the outside wall of the Manor. These papers were put in there in 1934 when the Queen Mary was launched. That part of the house was being modernised at the time and a newspaper was put in the wall as the Queen Mary was a topical subject.” (This account was deposited with other papers and photographs by Roger Bennett at the parish office of Aldingbourne, Barnham and Eastergate churches.)

On the roof of the northwest wing is a double chimney, above the inglenook fireplace on the ground floor. The loft space is accessed via a metal ladder in a bedroom at the eastern end of this wing. Jim Helyer, the current leaseholder, indicated a date ‘1934’ and a coin imbedded in the chimney stack on a recent investigation of the loft space; showing further work undertaken by the Robinsons.

Manor Farm is the centre of a conservation area and is situated next to St George’s Church. There is also a Grade II listed Elizabethan granary perched on steddles to keep the rats and damp at bay. 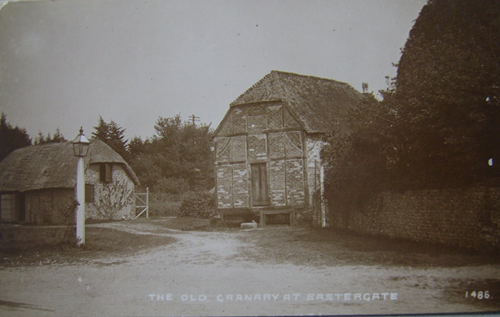 In 1961 the writer, historian and broadcaster Gerard Young who lived at Flansham wrote that the old granary had been patched, retiled, restored and lovingly cared for down the years. “Last year’s heavy rains caused its supports to sink, but Mr Frederick Helyer and his farmworkers worked day and night to ward off any possible collapse. It is now buttressed on its southern side with iron supports and blocks of stone.” The granary has been used for various purposes over the years including as a place for children to play – the Helyers and the Robinson girls before them. One old postcard shows a dovecote above the entrance door. The Helyer family let the Church use the granary to store tables, chairs and cooking equipment to further fellowship within the community.

There is also a Grade II listed barn and cart shed to the southwest of the farmhouse. Its listing states “The east wall is of red brick with a diaper pattern of grey headers. The remainder of the exterior is faced with flints and appears later. Stone steps up to the entrance on the north side. The west half of the building forms the cart shed with the lower portion open and weather-boarded above. Corrugated iron roof to the whole.”

Ann Swarbrick (1929-2014) nee Robinson wrote a memoir detailing her father’s time at Eastergate and his extensive nursery business including the names of many of his workers. Much of the information that follows has been taken from the memoir that can be found in full by clicking here – Captain JH Robinson

James Hughbert Robinson (1879-1958), known as Hugh or JHR, arrived in Eastergate in 1901 aged 22. He had worked for The Worthing Growers and had decided to set up his own nursery in a field today bordered by Church Lane (east end), the footpath to St Philip Howard School and Barnham Road. In 1914 JHR joined the Royal Sussex Regiment and went to France with the 13thBattalion leaving Frank Coe in charge of the nursery and Reuben Ruff in the retail and wholesale outlet for fruit and vegetables. This was The Barn, situated where Robinsmead (Robinson/Langmead) is today. By this time, the enterprise had grown with JHR supplementing his own produce with supplies from Covent Garden. In this way, he was able to supply local shops in the surrounding area as far afield as Chichester, Arundel and Bognor.

On his return from the war, JHR took Manor Farm as a tenant of the Ecclesiastical Commissioners and moved into the farmhouse with his parents and sisters. His father died in 1919 and, when JHR married Joyce Langmead, daughter of John Langmead of Northwood, Yapton, in 1925, his mother and sisters moved to a rented farm at Northfields. Manor Farm was a mixed farm with arable, pigs, a dairy herd and Southdown sheep. JHR and Joyce had four daughters, Janet, Pru, who tragically drowned off Climping, Margaret Ann, known as Ann, and Dolly.

The family lived at Manor Farm until 1937 when JHR’s mother died at the age of 91 and, deciding that more profit was to be made from the nursery and wholesale business rather than farming, the family moved to Northfields where they stayed until 1946 when they bought Denmans. Joyce Robinson was a keen gardener and, having laid out the large garden at Manor Farm, she set about creating an enviable garden at Denmans.

The Eastergate Nurseries became Langmead-Robinson, selling fruit, vegetables and flowers on the old Barnham Market site after its closure in 1949. In 1952 at the age of 73, JHR sold the business to his brother-in-law Jack Langmead.

Frederick John Helyer took on the lease of Manor Farmhouse and approximately 325 acres of land in 1938. His father had arrived in Sussex from Devon in the 1890s to farm the Duke of Norfolk’s land at Littlehampton and the family lived at 19 East Street according to the 1901 and 1911 census. Frederick was born in Littlehampton and helped his father on the farm until he decided to set up on his own with his wife Anne. His was a mixed farm with 40 dairy cows and a flock of Southdown sheep. According to his son there were also 6 cart horses and 6 cottages – 2 in Barnham and 4 in Eastergate with approximately 9 workers on the farm.

The couple had 4 children, Margaret, Pamela, John, and James (Jim). Every year the Helyers would supply a tractor and trailer for the village carnival and were involved in organising dances at Eastergate Village Hall with the Luffs and the Bennetts.

Son Jim took over the farm from his father in 1972, building up the dairy herd to 170 cows. Jim had married Sylvia in 1969, living briefly at Critchmere Road, and they had 2 sons, Paul and Martin at Manor Farmhouse. Paul took over the running of the farm in 2013, sold the dairy herd and concentrated on arable with 200 fattening cattle in the winter months.

After three generations of the Helyer family, the future of the tenancy is uncertain. The land is still owned by the Ecclesiastical Commissioners who are interested in selling to developers. Arun District Council in its draft Local Plan has earmarked the land for housing with a new A29 main road to bypass the railway crossing at Woodgate. The church, the farm and the manor house today sit in a village setting surrounded by Grade I farmland – what will be the scene in ten years?