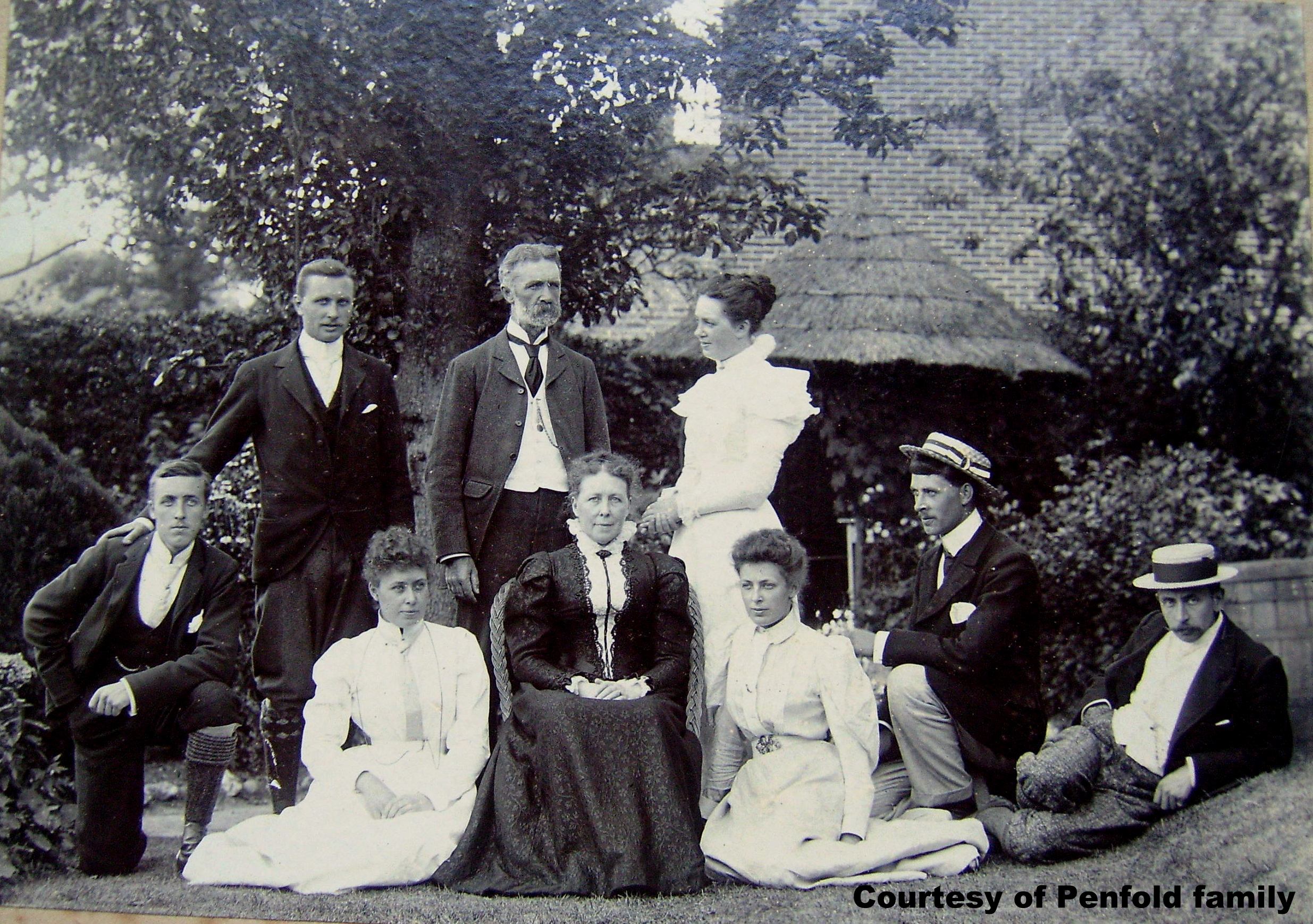 The story of Penfolds of Barnham begins in Arundel with the Penfold family business at Tortington Iron Works.  That business, which was founded in 1833, was chronicled by Francis (Frank) Penfold in his booklet and exhibition of photographs celebrating in 1983 “a history of 150 years of service to farmers”.  [West Sussex Records Office booklet: Lib 17151 and Lib 15621; copies of exhibition photographs: MP 6051.]

Standing: centre back: James Penfold; to the left: James Lear Penfold (son and founder of the companies in Barnham); to the right is Mabel (daughter)

Kneeling left: Percy (son); Kneeling right: Arthur (son); reclining: Reginald (husband of Josephine) (With thanks to John Penfold grandson of Percy for the use of the photograph).

James Lear Penfold was one of seven children: four older sisters and two younger brothers. He married Ivy Crunden in 1899 when he was 23 and the 1901 census tells us that he was at that time living at Tortington, Arundel, with his wife, two year old daughter Violet, his brother Percy and Ivy’s 13 year old sister. He and Percy worked at their father’s business and were described as agricultural machinists.

In 1909, James Lear Penfold broke away from the family business in Arundel and set up on his own in Barnham close to the cattle market and railway station.  James Lear Penfold initially undertook contract threshing at local farms and sold and serviced farm machinery.  He brought with him a traction engine, threshing ‘drum’ and driver.  According to John Penfold, his great-nephew, the engine was this one photographed by Heather Penfold at Northiam, East Sussex in 2002, shown fully restored in the photo on the right.

Burrell Traction Engine No.2819 registration BP5913 – Built in 1906, it was one of more than 20 in use at Penfolds works at Tortington.  It returned to Arundel in 1930 needing a full overhaul.  The Arundel driver was said to be Bill Druce of Colworth.

A photograph appeared in Farmers Weekly, February 27, 1987 and has been identified by the family as J.L. Penfold’s engine called ‘Atom Star’.  The date given is spring 1947 and it is not known if it was still in Penfold’s ownership.  However, the work had changed little since his days of contract threshing. (With permission of Farmers Weekly) -  follow the link to Flickr to view the photo.

The company began with five workers and by 1957 there were 138 people working for four companies and the boss still knew them all by name.  These were Penfolds Builders Merchants (formed in the 1930s), Barnham Transport Company (1930s), Penfold Metallising Company (1947) and Penfold Ready Mixed Concrete Ltd (1950s).  The companies moved with the times with the four sons, James Hugh Graham (known as Graham), Peter, Paul and David, taking an active part.  The family lived next to the works in a house called Dial House.

Aggregates for the building trade and roadmaking took over from agriculture and later the Penfolds were a major producer of ready-mixed concrete; providing concrete for such buildings as the Festival Theatre in Chichester.  At one time, the Penfolds worked sand and gravel pits in Eartham, Midhurst, Eastergate, Slindon and Washington.

Penfold transport was well-known in Sussex, bearing the firm’s name in elegant lettering as can be seen in the photograph of a 1930s Sentinel steam wagon (lorry) follow the link to Flickr to view the photo.

James Lear Penfold died in 1959, just a few months before celebrating 50 years in Barnham.  By this time, according to an article in the local Observer newspaper, the firm also had a depot at West Worthing, and wharves at Shoreham, Littlehampton and Newhaven. Their fleet consisted of over 50 vehicles.

His sons continued until 1967 when most of the businesses were sold to Ameys of Oxford (ARC).  Bernard Geoffrey Ruddock (1910-1993) joined Penfold Metallising Company after World War II and became a co-director with two of the brothers.  When the company came up for sale, Ruddock bought it and retained the name.  This company is still trading in Barnham (in 2016) at the old Penfold site with Bernard’s son Justin as managing director. 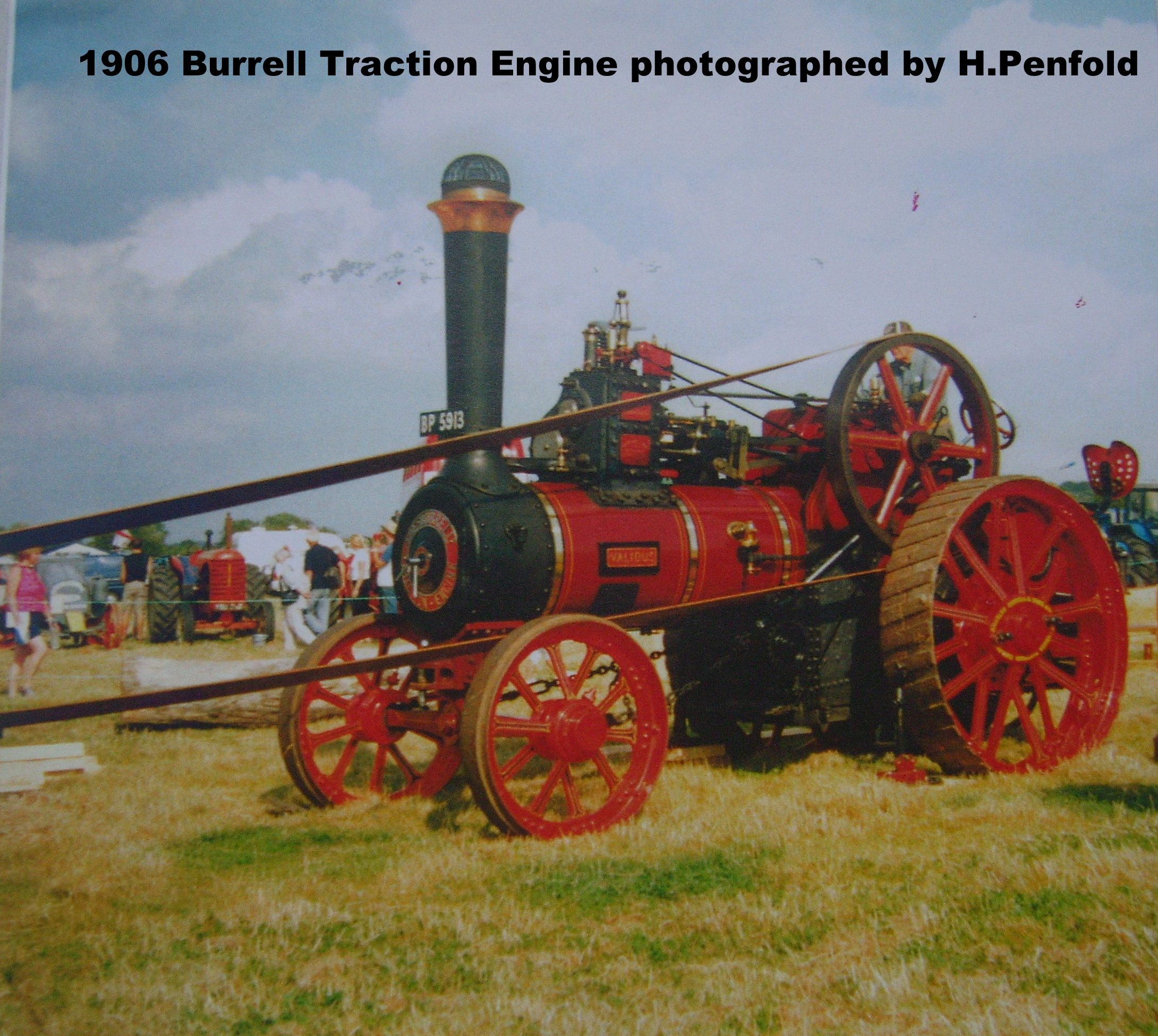