Smallholdings and other Council Housing 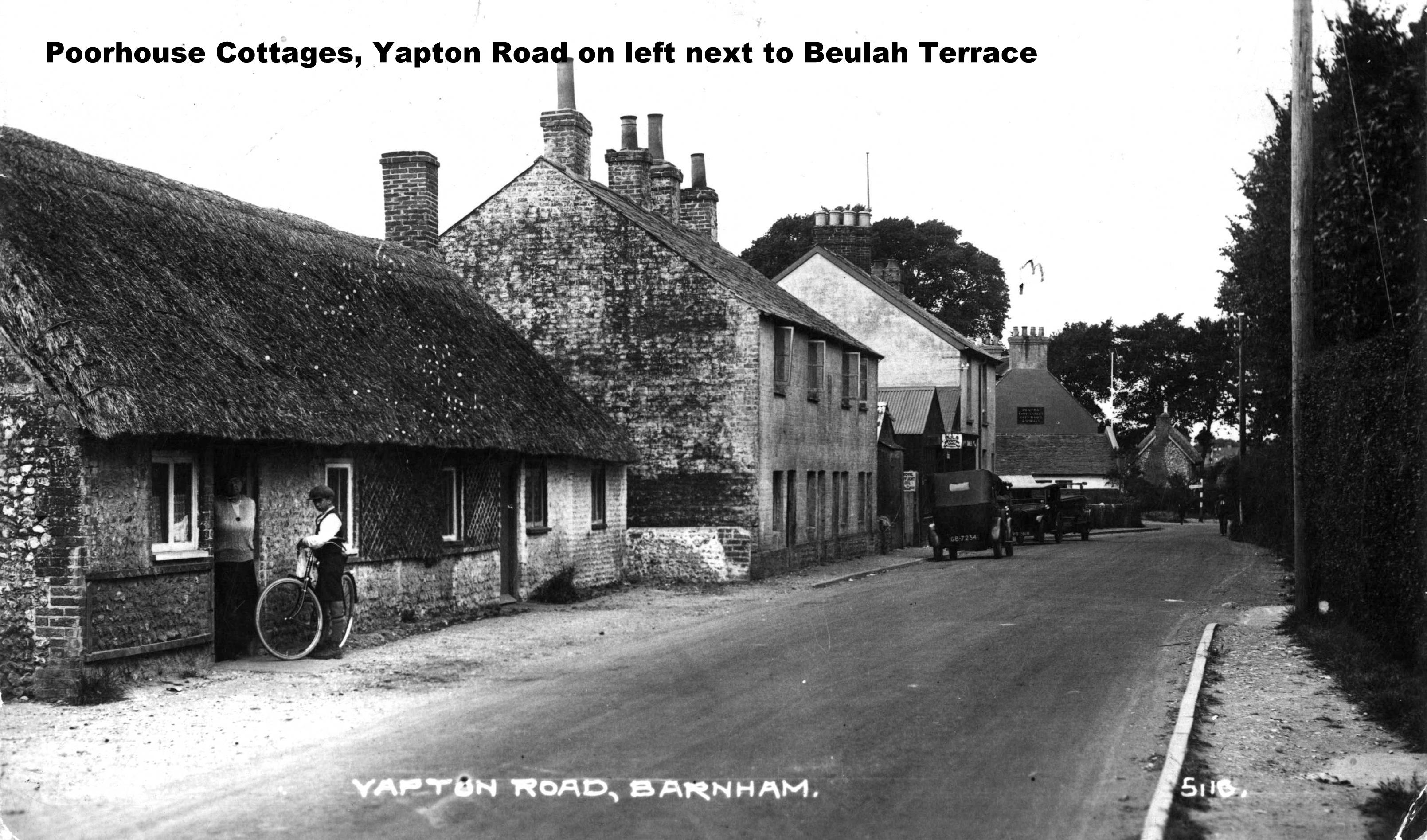 Smallholdings and other Council Housing

The first social housing must have been the poor house cottages in Yapton Road which were demolished to make way for the Parish Hall car park. William Chandler states “The building was erected during the Napoleonic war, tradition says by French prisoners, to form lodgings for prisoners on the march.” At about the same time, the poor were deemed by the Poor Law to be the responsibility of local councils – Barnham being under Westhampnett Rural Council on whose committees several local people served including Harry Knight and Sidney Marshall.  In 1849 the building is listed as two tenements and gardens belonging to the Parish of Barnham. The first meeting of the newly-formed Barnham Parish Council (i.e. civic rather than ecclesiastical) was in 1894 and it appears that around this time the two cottages were used for ‘technical classes’ and had ceased to house the poor. However the 1901 census lists one family; Frank Bacon, coal carman, his wife, Anfred and their daughters Ellen aged 11 and Florence aged 2, so perhaps only one cottage was used for the classes.

Following the First World War, the response of the County Council to the needs of the working classes was twofold: firstly land was sought on which to build what were then called County Council Cottages – three family houses now renamed Orchard Grange in Yapton Road (built at the same time as Hall Cottages in Barnham Road, Eastergate), and secondly to provide smallholdings on which local people and others, returning home to poor housing and unemployment, could live and work in self-sufficiency. The dream became the making of some and the beginning of a nightmare for others.

At least 20 smallholdings were set up in Barnham in accordance with the Small Holdings and Allotments Act 1908 and the Land Settlement (Facilities) Act 1919. Barnham was established as a place suitable for nurseries and market gardens and the produce could be sold conveniently at the Monday market in the village. The large field bordered by Church Lane, Yapton Road and Hill Lane was purchased along with land to the south and east of Hill Lane for Church Farm and Tile Barn Farm respectively, and land on both sides of Yapton Road.

For returning servicemen, the prospect of a family home and land to farm must have sounded idyllic but the reality was far from this.  At that time there was no electricity or main drainage in Barnham and the smallholders had to install their own earth closet.  At the Annual meeting of Barnham Parish Council on 28th March 1923, Mr HR Marshall moved a resolution to record “its strong condemnation of the way in which the small holdings problem in the village and neighbourhood has been dealt with.”  He said that the dwellings were neither waterproof nor sanitary, and the land “may fairly be described as waterlogged, and the houses have been built, in many cases, on the waterlogged portions.” Most smallholdings were between one and three acres and were a mixture of market gardening, poultry and pigs.  In the main they were too large for one man to maintain by hand and not profitable enough for the employment of additional labour. Also, many smallholders lacked experience.

Using their modern names, the smallholdings were:

Yapton Road, north side, Highfield House, once owned by the Beck family and now a private house with little land as the land has been incorporated into the adjacent Sunnyside. Sunnycroft was the house originally occupied by Frank Toynbee of Croftway/Toynbee’s Nursery (see below), and Mapletrees, which remains a wholesale nursery.

Hill Lane, eastside, has Tile Barn Farm and south side has Windy Corner, recently renamed Saxons (No. 33), and Church farm. On the north side of Hill Lane there are five pairs of smallholdings. No.43 has been demolished and rebuilt as a detached house.

Taken from Windy Corner, the postcard on the right shows the five pairs of houses.

Over time, the size of many smallholdings changed with land being sold or transferred to adjacent properties and local farms.  By far the two largest concerns were Tile Barn Farm and Church Farm which were able to mix arable and dairy farming.  According to Harry Dart in his memoir, a dairy herd was introduced at Church Farm by brothers John and Roger Poulton in 1921. Later John emigrated to Australia and Roger left the farm to work for the Southdown Bus Company. Cyril Allam took over Church Farm and started a retail milk round in the area. Other successes were Frank Toynbee who developed Croftway Nursery and the Beck family who moved into Highfield House and bought Sunnyside next door. (See below)

Graham Strotton’s father and grandfather worked numbers 43 and 36 Hill Lane respectively and he remembers clearly the people living in the lane in the 1950s, their ‘other’ jobs and their produce from the smallholding. He tells of market produce, pigs, goats, chickens, rabbits, Nobby Horn the haulier, Gordon Main the postman, Mr Macstead the painter for WSCC, and there was a countryside ranger. At one time Hill Lane was a close knit community with Ron Main at number 38, James Main at number 41 and Gordon Main followed by his cousin Don Main at Windy Corner. All the Mains together with Mr Matthews at number 40 were related in some way. His account can be found by here Graham Strotton's account [pdf] 478KB.

Today, the dairy herds no longer wait to be milked and outhouses have been converted to holiday lets. Many of the houses are in private ownership and there are several small wholesale nurseries but West Sussex County Council still owns much of the land.

Further WSCC smallholdings are to be found in Barnham Lane in Walberton Parish.

Frank Toynbee took on a County Council smallholding in the 1920s in Yapton Road and developed it into a thriving nursery business expanding to 31 acres with 30-40 employees by 1965.

According to the Register of Electors, Frank Toynbee first appears in 1921 c/o Frank Dollery at 1 Council Cottages then “near Highfield Cottage”.  Between 1922 and 1928, he is registered at County Council Cottages, which is the name given to all the smallholdings in Barnham. This was probably Sunnycroft which is today a private house unconnected to the nursery. In 1930 he is at Croftway, a new house that he had built, which became the name of his nursery (also known as Toynbee’s Nurseries).  In the early days, according to Harry Dart, he was helped by his brother, Gerald, who later became a haulage contractor and builder. By 1928, Gerald was no longer living with Frank but is at a newly built house, Watermead, with his wife, Ada.

In William Chandler’s Scrapbook (WSRO ref: AM361/1), a letter on headed notepaper has been inserted setting out the history of Toynbee’s Nurseries.  It is undated but mentions 1961 so must have been written after that year.  It gives the following information:

1920s – With the development of housing at Middleton, the nursery turned to landscape gardening and the supply of trees, shrubs and plants;

1939-1945 – market garden production was resumed including artichokes and sweetcorn for American servicemen;

1945 – Known as Toynbee’s Nurseries, a thriving mail order business was established supplying plants both at home and abroad;

1948 – The logo of the god Pan sitting under a tree was adopted – taken from a weathervane at the entrance to the nursery;

1961 – One of Dukes Cottages, the neighbouring property was purchased and the garden taken to enlarge the carpark.  The nursery was extended to 31 acres.

The 1952 catalogue shows the manager to be Mr JO Toynbee, Frank’s son John. According to a director at the time, Mr DG (Teddy) Edwards, (who retired to a new house ‘Sundance’ built within the grounds), John lived at Sunnycroft.  In 1968 the Directors were FA Toynbee, DG Edwards DFC, G.Wilkes, HA Fradd and EJ Beatty and the comprehensive catalogue full of gardening tips and plants for every situation was over one hundred pages. The nursery continued under various owners with extensive Iris fields in the 1990s drawing visitors from afar. Today the houses on the former nursery site – Sunnycroft, No.1 and No.2 Dukes Cottages, The Hall (Croftway Nursery), Croftway House, Sundance, The White House, Saxby and Watermead - are all in private ownership and Croftway Nursery is no longer open to the public.

Thomas Henry Beck was born in Hendon, Middlesex in 1878 and in 1911, according to the census of that year, lived at 26 Defoe Avenue, Kew Gardens, with his wife Gertrude and young children Constance aged 6, Edgar 4 and Mildred 3. He was a law clerk – very much an indoor occupation. Advised by his doctor to move nearer to the sea (the reason passed on through the generations to his grandson Peter), Thomas settled his young family in the fast expanding village of Barnham with its railway station, livestock market and prosperous nurseries. In 1920 the family were renting Flint House in Lake Lane but we do not know how he was earning his living.  What is clear is that, shortly after, Thomas decided to try his hand at market gardening and he took on Highfield Nursery which he rented from West Sussex County Council as a smallholding.  There was a house and land bordered by Old Mill Cottage to the east, the railway line to the north and Sunnyside owned by HR Marshall to the west. This proved to be a beneficial move on Thomas’ part as through hard work and good business sense he developed a thriving wholesale nursery delivering locally. It is said that he would be seen working in the fields long after his workers had finished for the day. In 1946 Thomas and his son Edgar bought four cottages opposite the nursery to house their workers – these are today Flints, Willow Cottage and 1 and 2 Dunora Cottages.  Around 1950 Thomas and Edgar, trading as TH Beck & Son, were able to purchase Highfield Nursery from the Council and Sunnyside from the remaining members of the Marshall family. Thomas Henry Beck lived to the respectable age of 79 perhaps showing that the outdoor life, not too far from the sea, was the making of him. Today parts of the property have been sold and the nursery fields are a certificated site for the Caravan & Camping Club. Peter and his sister Mary, grandchildren of Thomas H Beck, live at Sunnyside. Highfield House, Sunnyside Barn and the Flint Barn are private residential properties.

After the Second World War councils throughout the land once again set about building homes for the returning soldiers. In Barnham homes were needed as elsewhere and demand was high.  A note in the papers of Mervyn Cutten refers to the land and houses in Marshall Close. It says that the field was bought in 1880 by William Allan Hounsom, JP, from the Barnham Estate (Barnham Court Estate) and was let to Barnham Nurseries as a grazing field for their horses. Hounsom’s niece inherited the land on her uncle’s death and the land was sold to Chichester Rural District Council. Cutten says that 12 houses were completed and occupied in October 1948 and 6 in February 1949. The Close was named in honour of the contribution to the expansion and prosperity of the village by the Marshall family – especially by Sidney, who had died in March 1948. Mr Hounsom, although he lived at Bonham’s in Yapton, was an early chairman of Barnham Parish Council and a supporter of community projects. He may well have been pleased to know that his land was used for community housing. 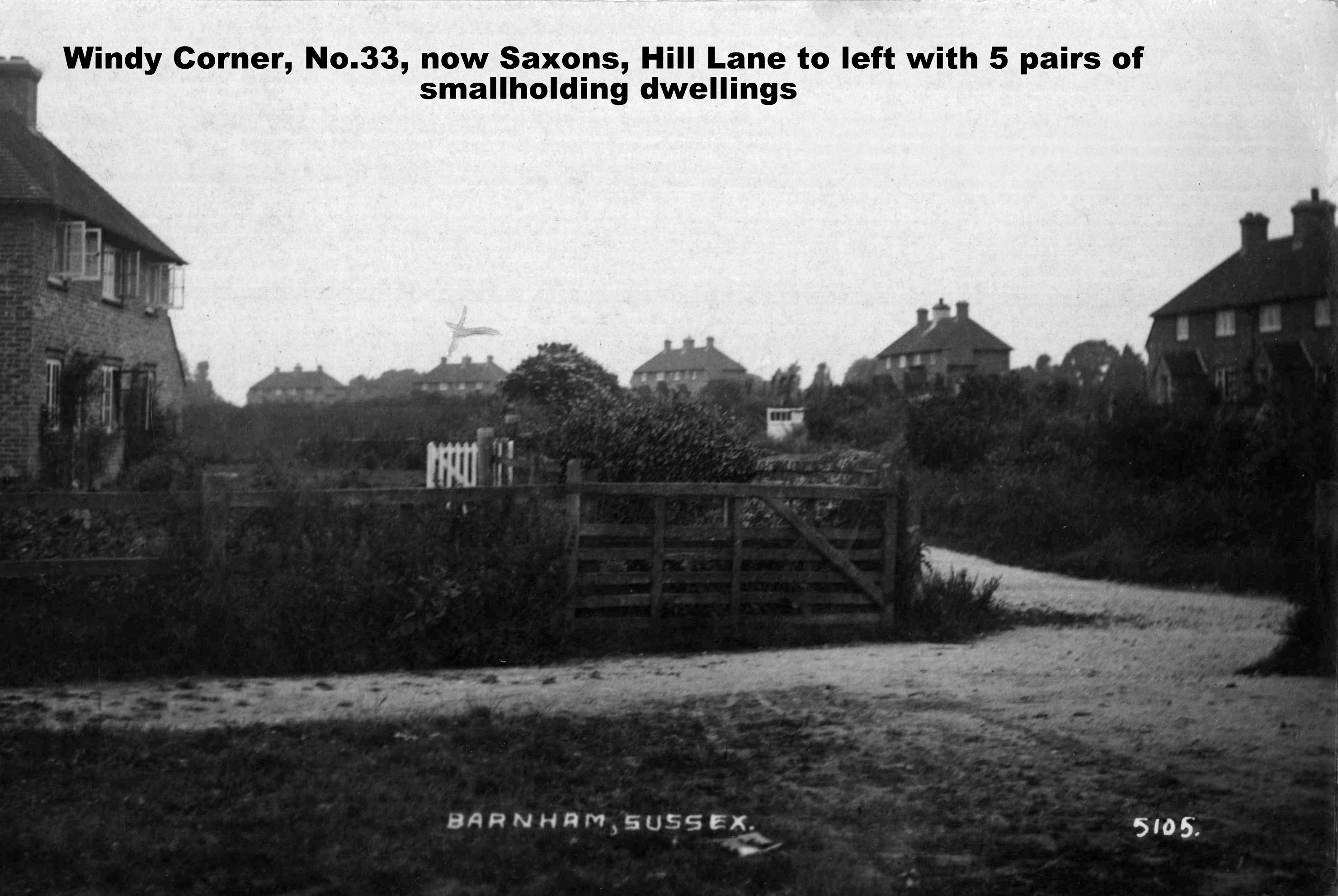