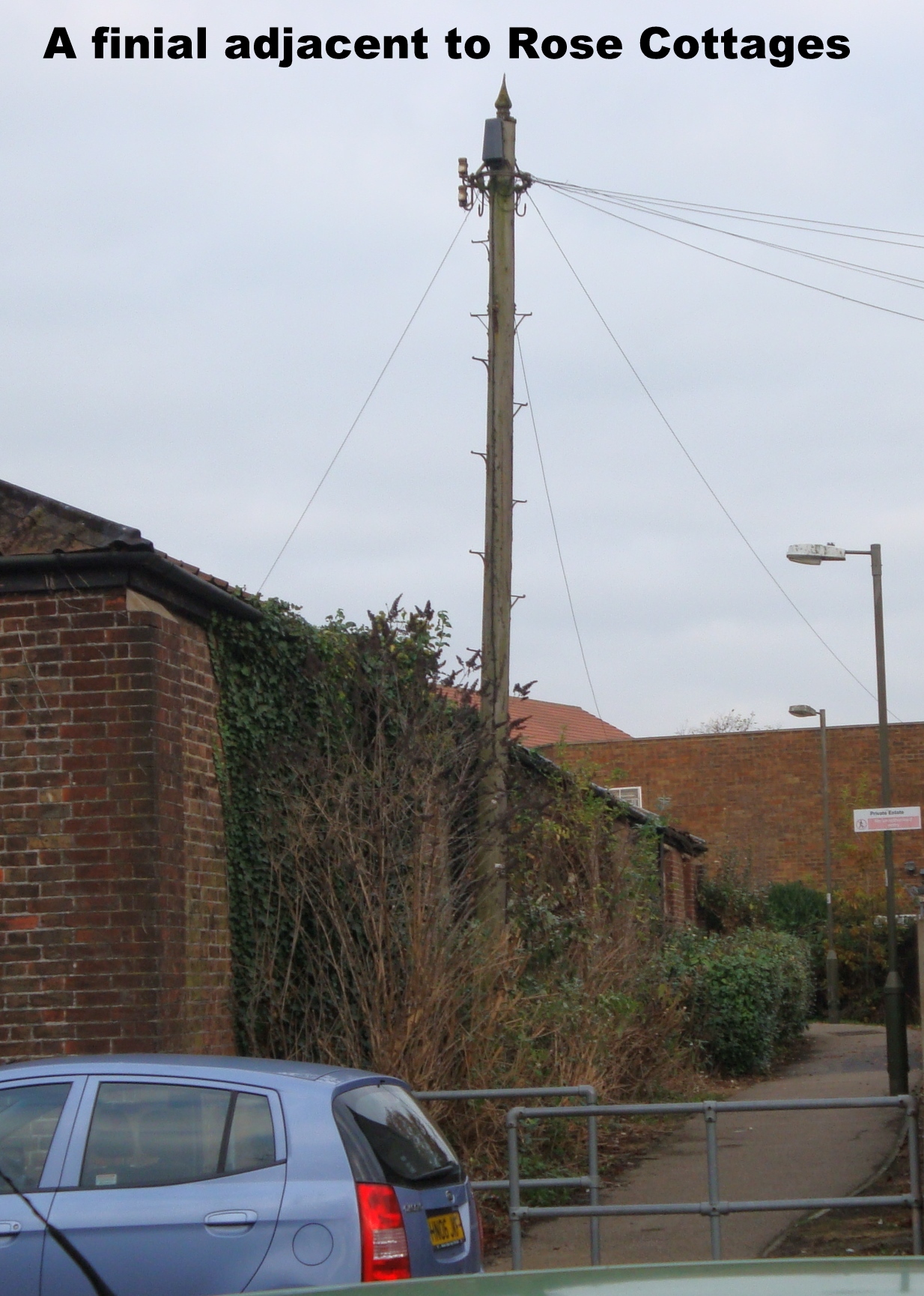 According to Harry Dart: The telephone came into use in Barnham in 1906 our first local Exchange being the thatched house east of Eastergate Square and operated by Mrs Walling – Barnham Nurseries being Eastergate 1 and my father’s No. Eastergate 9.

Many postcard views circa 1910 show the telephone poles that were erected throughout the district and that were a cause for concern for many people. The Wanderer, a correspondent for the Chichester Observer and West Sussex Recorder in his/her column ‘Eastergate Jottings’ writes: I hear that the Parish Meeting think of advertising for a few thousand hop plants to run up some unsightly poles lately erected in Eastergate and district by the Telephone people. (From The Parish Hall Adventure compiled by Susie Peters, 2007, WSRO ref:MP5648)

It was the policy of those ‘Telephone people’ to top the poles in select neighbourhoods with a pointed finial. These can be seen in the postcard views of Elm Grove and today several remain in Barnham Road   – for example, one near the village hall at Eastergate and another in the alley next to Rose Cottages (see picture left).

It is clear from the postcard scenes of Barnham Road that early in the 20th century the road was ‘unmade’. Harry Dart explains that the roads were ‘…narrow, bordered by ditches…with flint surfaces pressed in by huge steam rollers, very dusty in summer and muddy in winter.’ Traffic in Barnham Road on Market Day consisted of droves of local livestock leaving in their wake mud, dust and waste. As motor traffic increased, the road became hazardous for pedestrians and a letter from William Collins, chairman of Eastergate Parish Council to Westhampnett RDC asked for the ditches to be filled in. This was rejected for reasons of drainage.

The Highways Committee of Westhamptnett RDC attended by local councillors Reverend William Yoward and Sydney Marshall discussed the poor state of the road in August 1908 and Mr Marshall put forward the new notion of applying calcium chloride to the surface ‘as a preventative of the dust nuisance’. He offered to treat 200 to 300 yards of Barnham Road at his own expense. It was reported the following month that the first coat showed promising results. (A quick search of the internet shows that this is still an effective method of ‘dust laying’)

Tarmac had been patented in 1901 and eventually it was applied to most roads. Ditches were filled in and drainage pipes installed. Pedestrians, however, generally waited a lot longer before footways became standard.