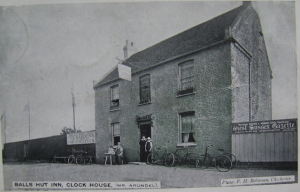 The above postcard shows the Ball’s Hut Inn at the beginning of the 20th century.

Local history has maintains that in the 18th century Thomas Ball was a shepherd who lived in a ‘hut’ or makeshift abode in the field described as ‘ball’s hut field’ on the 1845 Tithe map at the corner of what is now Fontwell Avenue and Arundel Road.  He made his own beverage which he sold to travellers on the Chichester to Arundel road which ran all the way to Pevensey.  It is said that Mr Ball was hanged at Slindon gibbet for the illegal export of wool during the Napoleonic wars.  An inn was built at the busy junction and today the site is marked by a gate with the name ‘Ball’s Hut Yard’ next to the old Police House. Mrs Valerie Penny of Eastergate told Rob Blann for one of his ‘Remember When’ articles for West Sussex Gazette (1995) that when she and her husband lived there they experienced supernatural happenings in the form of glasses being thrown around and a man walking through a wall…

Queen Victoria passed through on her way to the Isle of Wight in 1842 to rest after the birth of her eldest son Edward. In December 1846 she travelled from Osborne House to Arundel Castle. A troop of the Sussex Yeomanry escorted her to ‘a place called the Bull Hut’ where the Earl of Arundel’s men took over.

The following is an extract from ‘Around Aldingbourne’ by Cliff Mewett and Vivienne Salmon, 2006: When the road to Storrington was turnpiked the Balls Hut became a busy coaching inn. Among the early landlords was Henry Weakfield who ran it from 1825-27 until his son, Thomas, took over until 1844. William Cooper was the incumbent for the next 16 years followed briefly by William Walder and then James Baker until1877. During these early days the bulk of trade would have probably been travellers en route to and from Chichester, Arundel and Storrington either on foot, horseback or travelling by coach and horses. By the time John Goble took over in 1877, and certainly in the 13 years Henry Bennett resided from 1887, the Balls Hut had become a favourite venue and resting point for those engaged in the cycling craze sweeping the country, its tea gardens being a particular attraction. It has been recorded that in some parts of Sussex crafty landlords would have ladies bicycles leaning against the public house in order to attract the more numerous male cyclists inside in the hope of meeting the fairer sex, a neat ploy to increase trade.

At the turn of the century William Rogers, a gas engineer, relocated from London on doctor’s orders to take over as publican. His hobby was repairing clocks and watches and he found the Ball’s Hut Inn to be the ideal place to house his large collection of grandfather clocks. In addition to the clocks in the clock room there were apparently a further 22 in the public bar. He had eleven children; many of his descendants still live in the area.

The pub sign was painted by Ralph Ellis in 1924 and was repainted every two to three years until 1951.  It shows an elderly man with a twinkle in his eye enjoying a pipe and a tankard of ale. The name is shown as Ball’s Hut Inn with an apostrophe although it has often been written without. (A drawing of the sign is held at WSRO ref: PH 16225/83)

In 1924, the year that Fontwell racecourse opened, a new wing was added to the inn, doubling the accommodation.  It is remembered with fondness by walkers and cyclists who stopped there for refreshment right up to its closure.  The inn was renamed ‘The Fontwell’ in the 1980s with the loss of the sign (where did it go?) and its link to the past and it was demolished in 1992. In 100 years the inn had seen trade from horses and carriages to bicycles to cars to juggernauts and the road from a dusty track to tarmac to a new dual carriageway close by leaving the building once again on a quiet road, heralding its demise.

The exact location of the café is not clear and as Fontwell is close to the borders of Eastergate, Walberton and Slindon, it is uncertain which parish it lay within. However, it is recorded here so that it will not be completely forgotten. David Dean who until recently owned and operated the residential care home Abbey Dean in Barnham Road sent me information about his family’s businesses in the area – his father was one of three brothers and his grandfather founded Arthur Dean Builders Ltd, building much of modern-day Eastergate. He says: My grandfather in the 30s bought the land at Fontwell and he moved a building from Middleton which they ran as a country café, later to become a transport café and eventually the original Little Chef…before the war my grandfather Arthur Dean also ran taxis to Barnham Station with my grandmother Alice Dean from their café. 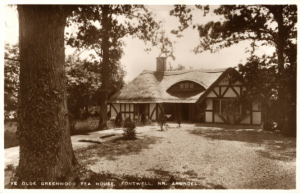