The window shows Christ in the centre flanked by St George in gold armour and St Michael in silver. The tracery windows show a desert scene and Christ walking on water.

Horatio Herbert Kitchener was born in Ireland in 1850; a career soldier, he gained promotion, honours and titles through dedication and achievement.

A career soldier, Kitchener gained promotion, honours and titles through dedication and achievement. It is clear that he was a notable leader and strategist; sometimes ruthless but documents show that he cared for the welfare of his men and was held in high regard.

Kitchener was on leave in August 1914, about to return to Egypt when he was recalled by Asquith to become Secretary of State for War. This was a popular choice among his peers and in the country. He was tasked with raising a huge army which he did through the patriotism for the King and the high esteem in which Kitchener himself was held. 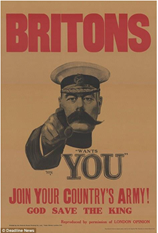 His instruction to the commanding officers of the British Expeditionary Force was to support the French and not to take risks with their men. History was to show that the British and Commonwealth forces were to take a much more active role with severe loss of life.

HMS Hampshire, an armoured cruiser, one of the navy’s fastest, left Scapa Flow in the Orkneys on 5th June 1916 (a couple of weeks before Kitchener’s 65th birthday). It was bound for Russia where Kitchener was to meet with Tsar Nicholas to persuade him to commit more forces to the eastern front against Germany, thus relieving the British and allied forces. The British had already supplied Russia with munitions and were prepared to come to a further financial arrangement but there would be a limit to the funds available. Lloyd George was also to go but trouble in Ireland caused him to withdraw at the last minute.

On board was a crew of over 700 men and there was about a dozen personnel including high ranking military and Home Office people.

The ship was escorted by 2 destroyers, in very bad weather, first one was told to turn back and then the other; they could not keep up with the Hampshire in such atrocious seas.  Just a mile and a half from Marwick Head the Hampshire struck a mine damaging the centre, causing the bow to sink. All men were called to the rear deck but it proved impossible to launch the lifeboats as they were dashed against the side of the ship by high seas. The ship went down in 15-20 minutes - 737 men drowned, only 12 survived.

Petty Officer Albert Chitty a stoker from Yapton was among the drowned. However Stoker 1st class William ‘Walter’ Farnden born in Barnham in 1892 survived (See his full story in HMS Hampshire: a Century of Myths and Mysteries Unravelled, published by the Orkney Heritage Society 2016). Briefly, Farnden joined the navy in 1913 as a stoker to serve 12 years. After surviving the Hampshire disaster and the war, he served on minesweepers. In 1919 his ship HMS Gentian, together with HMS Myrtle, was sweeping the Gulf of Finland when both ships exploded a mine and sank. Stoker Farnden survived yet again. He married Emma Ansell in Brighton in 1936 and in 1939 he was living in Bognor. He died in Chichester in 1972 aged 80.

Earl Kitchener’s body was never recovered and the wreck is now a war grave. His death sent shock waves around the British Empire and has been likened to the deaths of Kennedy and Diana – everyone remembered where they were when they heard the news.

The Lord Kitchener Memorial Fund was launched by the Lord Mayor of London headed by Queen Alexandra raising £500,000. The fund aided casualties and after the war enabled university education for soldiers, ex-soldiers, their sons and daughters. It continues to this day. The Kitchener memorial was built by the people of Orkney on the cliff edge at Marwick Head and, for the 2016 centenary, a wall containing the names of all who died was erected.

To return to the church window, the inscription reads:

To the honour of Christ & His Saints and in grateful memory of Horatio Herbert EarlKitchener of Khartoum His Majesty's Secretary of State for war from August 1914 June 1916His genius & indomitable energy and the implicit confidence reposed in him by his king and country enabled him to raise the vast armies that proved the salvation of the British Empire for which he laid down his life + coffined in a man-of-war he passed to the great beyond.

So why is it there?

It was commissioned by Mr Edward Brandon of Northfields, Level Mare Lane, Eastergate. This is a very large house once owned by a very rich man. A local newspaper article at the time records the blessing of the window by the Bishop of Chichester and names Mr Brandon as the benefactor.

An extract from the Bishop’s address is as follows: ‘Horatio Herbert Kitchener, a name never to be forgotten by us, a memory never to be let slip by, a life for which his country may well thank God and take courage. He was a true hero. His was real greatness, for duty was uppermost in all he did and all he said all his life through. First of all his duty to God, for he was a godly man, and secondly his duty to man, for he never flinched for that which he knew to be right to others. By noble means he did noble deeds and obtained noble results. Upright, fearless, I shall never forget him as I heard him making his last speech in the House of Lords, telling his story without attempt at eloquence, but in his own plain, straightforward words telling just what he wanted to be known. Never moved by fear of what men would say, never seeking his own advantage, he has passed away from us. We shall be poorer a great deal if we don’t bear his memory in mind, and so we welcome every memorial that is set up, wherever it may be and not least a memorial in a quiet little country church like this.’

Kitchener’s niece, who is coincidentally living in locally, was led to believe that Mr Brandon was involved in shipbuilding. Was he associated with the HMS Hampshire or was that a family myth? What is certain is that his sister Kate married Sir George Arthur, Private Secretary and friend of Lord Kitchener. They would no doubt have moved in the same circles so did Brandon’s grief prompt him to commission the window? Or was the window the result of the need around the country to remember the man who had no known grave – as other memorials had done for local lads?