Born in Portsea, Hampshire, Richard Walling spent much of his life in Aldingbourne but it was a life that fell into two distinct parts. Described in 1851 as a master miller and corn dealer and in 1861 as a cornfactor employing 2 men, it is said that he rode every day to the tidal mill at Siddlesham. Richard Walling was also a keen Weatherman. Barbara Ovstedal wrote in Country Life in 1967: For over 70 years the journal of the Sussex miller, Richard Walling, had lain unread in a drawer. I was the first person to read all that had been written down since the miller himself had closed the book just a few weeks before his death in 1895. The journal recorded the weather each day from its first entry in 1836 and also included local and national news. In January 1880 he recorded: Mrs Walling died without a murmur. His first wife, Mary, was eleven years his senior and there were no children. A transcript of the journal is held at WSRO ref: MP 754. 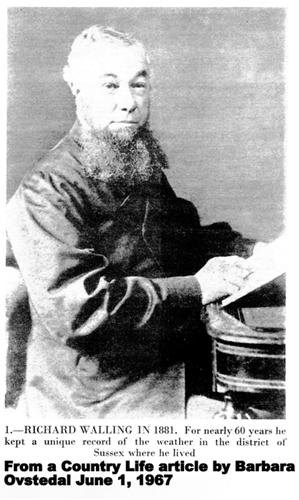 However, by 1881 Richard had retrained as a harness maker and, at 59 years old, married his second wife Adelaide, a schoolmistress at Aldingbourne School, age just 26. As a member of the school board, Richard had been instrumental in the appointment of Adelaide who had travelled from Gillingham for the job. He set up a harness shop next to his home in Nyton Road and had three children – Richard Harvey/Harry born in 1882, George William born in 1883 and Cecil James born in 1889. Richard junior was employed as a saddler and moved to Rustington where he married Ruth Chase Warren in 1911. George, known as Will, followed his father as a master harness and saddle maker and Cecil set up the Silver Queen Omnibus service in 1919.

At the time of the census in 1901, 5 years after her husband’s death, Adelaide was continuing the business with the help of son, Will, who was a 17 year old harness maker. Son Richard, a saddler, was visiting the Porter family in Cosham and Cecil aged 12 was at school. They had two boarders, James Smith and Arthur Pratt aged 14 and 15 who may well have been helping in the shop.

Ten years later, the family had moved to the ‘1623’ cottage in Barnham Road that has been variously called Telephone Cottage (1911), the Thatched Cottage and the Old Thatched House. According to Harry Dart, in his memoir, the first telephone had been installed in 1906 with Barnham Nurseries being Eastergate 1 and his father Eastergate 9. Adelaide Walling was the first telephone operator which was situated within the cottage. (The automatic exchange was built to the rear of the cottage and operated from 1958) Will and Cecil were both living at home with their mother and working as a harness maker and as a market gardener.

Local author Barbara Ovstedal, nee Geils, (1921-2012), who wrote historical fiction under the name Rosalind Laker, contributed several articles to the Country Life magazine detailing the history of the Walling family including ‘An Early Weatherman’s Journal’ (1967), Uncle Will in Harness’ (1970), and ‘The Christmas Bus’ (date unknown). She was unrelated but a close family friend.

George William Walling, known as Will, was apprenticed to his father’s business in Nyton Road, Aldingbourne from the age of 13. This was around the time of his father’s death and his mother Adelaide continued to run the harness shop until the family moved to the Thatched Cottage in Barnham Road. William Collins was a major landowner and it was he who set up Will at new premises adjacent to the Thatched Cottage. 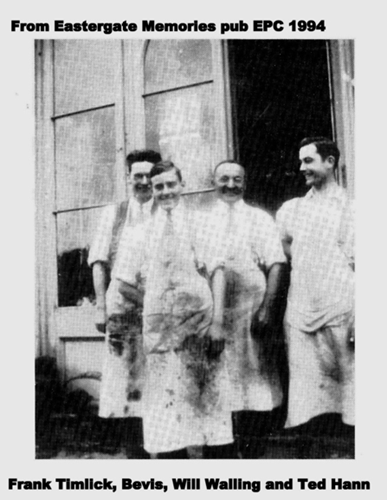 It was an ugly square concrete and brick building softened by a pair of ornate doors mounted on brass hinges that had been purchased from Arundel Castle following renovation work. Barbara Ovstedal described the atmosphere inside: It was considered a treat to be sent on some errand there, for it gave a legitimate excuse to hang around and gaze at the bridles and blind-folds, the pads and reins, and the stacks of brushes, curry-combs, oils and whips. There were always saddles awaiting collection, and their shiny gloss took on a tell-tale bloom from warm fingers, making it necessary to huff and polish frantically either with a scarf-end or cardigan sleeve to remove the evidence that they had been touched while Will Walling’s back had been turned.

Will married Annie Pullen in 1915 and they moved to Clifton Cottage, School Hill, Slindon. Will never owned a car and in time swapped his pony for a bicycle. Barbara says that he was ‘a true Sussex man who knew every inch of his county and could name every bird, flower, plant and tree to be found in it.’

Later the premises became a greengrocer shop, a carpenter’s, a game shop (Dalton’s Food Centre), and is now a private house called ‘The Annexe’.

“Nobody ever left behind!”

This was the slogan of the Silver Queen bus service that ran from 1919 to 1944 between Bognor and Slindon via Shripney, Woodgate, Westergate, Eastergate, Fontwell, Barnham and Walberton.  The service was started by Cecil James Walling whose brother, Will, ran the Saddlers and Boot Shop in Barnham Road, and whose mother was the first telephonist at the Thatched Cottage telephone exchange.

Cecil Walling had served with the Sussex Yeomanry before the Great War but was turned down for active service on medical grounds. He had various jobs including working at HR Robinson’s Eastergate nursery, driving a fruit and veg van for his Uncle Harvey, running his own 5 acre leasehold nursery and mending bicycles!  The horse and cart service between Slindon and Barnham was no longer running and he saw a gap in the market for a local bus service. He approached his friend Mr J Horsford, outfitter of Bognor, for a loan of £100. The first bus was a converted army ambulance which he fitted with 14 wooden seats and painted silver grey.  The name ‘Silver Queen’ was painted on each side by George Ellis, a local signwriter. The route was soon extended to Bognor with a weekly service to Chichester. At the time, the bus ran on solid tyres and the roads were unmade; with wooden seats the journey must have been a very uncomfortable ride. 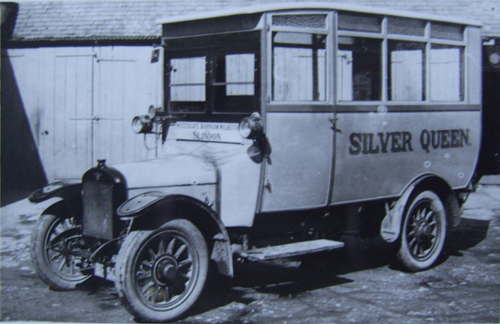 Mr Walling’s company offered a very friendly personal service; all the names of the regulars were known to the drivers and the bus drivers would always wait for the locals if they were not at the bus stop as expected. In cold weather the driver would toot the horn and the passengers would come out of the warm cottage straight onto the bus. It was not unknown for someone unwell to give the driver a list of shopping to be dropped off on the way back. It was also a local parcel delivery service and there was a G.P.O. approved post box on board.  Special trips would be organised on Goodwood race days, to dances and pantomimes in Bognor and in 1924 he went to the Ideal Home Exhibition in London. It was not unusual for the buses to be overcrowded with passengers hanging on to the outside if there was no room inside.  Through the twenties and thirties additional vehicles were added to the fleet and were kept at a depot on the corner of Fontwell Avenue near to the war memorial. Early drivers included Ernie Parker, Jim Grainger, Sam Weller and Bert Powell.

There was fierce competition from other bus companies, especially Southdown, but passengers remained loyal. In 1930-31 the Passenger Road Traffic Act stipulated that a licence had to be obtained to run on particular routes. After much haggling in the courts, Southdown was only allowed to run ‘between times’ and not immediately before the Silver Queen as it often did.

During the war, the bus was often full of soldiers and airmen, Canadians and Americans, singing on their way back to camps and aerodromes. During the invasion scare, two buses were on call at the Eastergate village hall from 7pm to 7am to carry troops. It is said that one night Cecil and another driver drove two buses without lights from Eastergate to Littlehampton during a bombing raid to defence posts by the sea. They were also called on to transport sailors from the docks at Portsmouth to Plymouth and elsewhere. One bus was caught by machine gun fire during a raid and Bert Powell and Ralph Brown had to hide under the bus to dodge the bullets. The bus proudly carried the scars.

At some point Cecil Walling obtained a partner, FW Jenkins. His name appears on some adverts and timetables but no information about him has come to light. At Christmas 1944 the Silver Queen was retired and the routes taken over by the larger Southdown Motor Services.  Drivers Ralph Brown, George Bevis, Roger Poulton, Jack Steadman and Peggy Farrier all found work with that company. The locals mourned the loss of the Silver Queen and the service that had been second to none.  Cecil Walling purchased the Irene Garage, with house and garden (in Aldingbourne Parish) and rented the Spur Garage at Slindon. On his retirement, he moved to a new house in Bognor.  He died in 1972 aged 84.