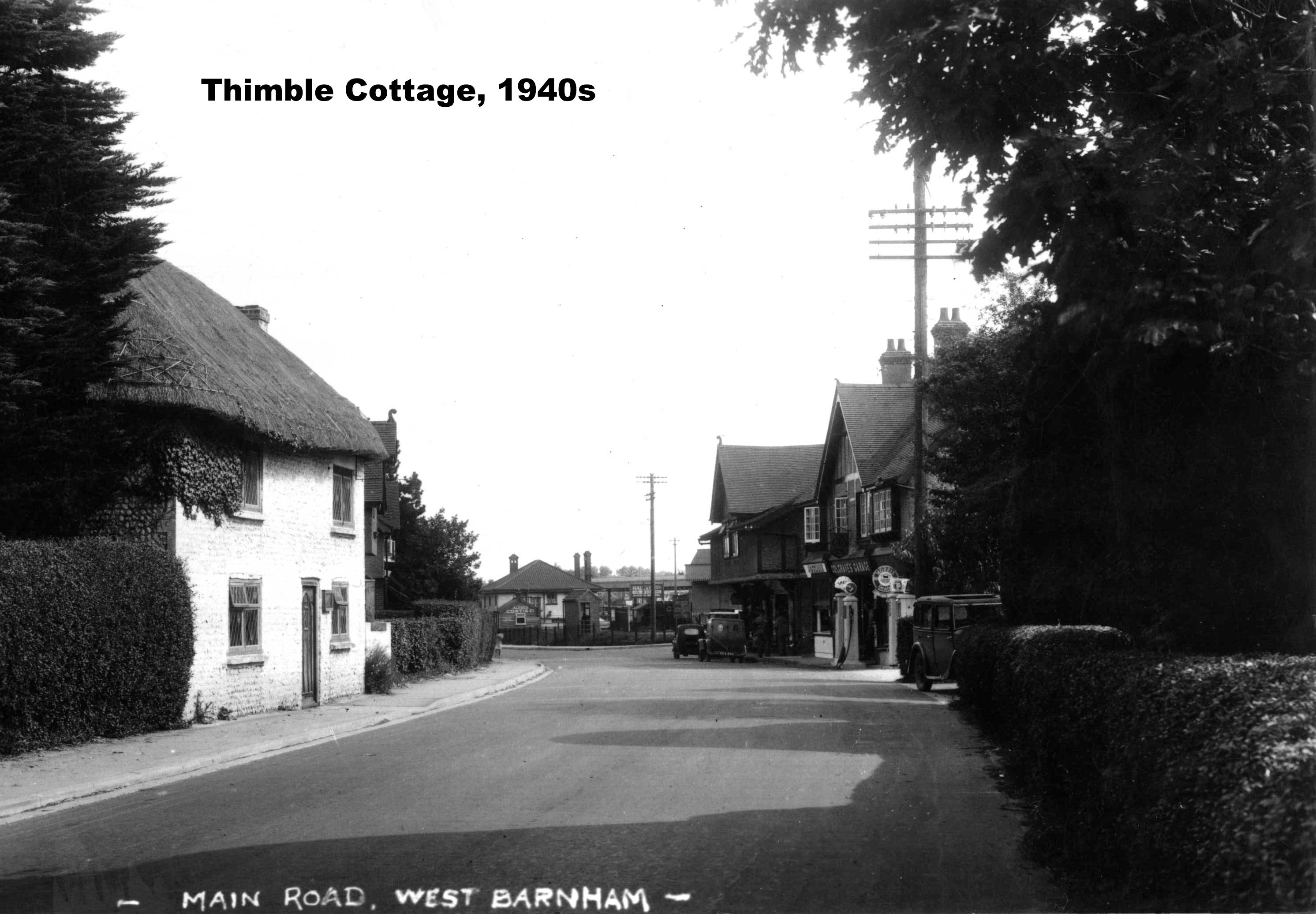 Leaving the village of Eastergate and walking along the road towards Barnham, the traveller would have passed fields to right and left. A local may have known these as Lamb Field, Swing Gate, Little Rough Rakes, and Goffs Pond Field, but to a traveller these were arable fields like many others.  To the left would have been a rough track, then a little further on a small thatched cottage would have been seen – Thimble Cottage, where Francis Diggins lived.  Across to the right, a steam train may have journeyed but would not have stopped as the nearest stations were at Woodgate and Yapton.  A welcome sight to the left would have been the Barnham Bridge Inn with its gardens and stables, where William Caiger was the tenant.  This then was the extent of what later became known as West Barnham although it lay within the Parish of Eastergate.

Seen on the left of the picture in the left column, the thatched cottage is Grade II listed, 18th century.  The door to the street is no longer there and the cottage was left derelict several times during the 20th century. According to local man Arthur Timlick, it was at one time the residence of the Murray Stapleford family and an estate agency. Today it has been renovated and retains its distinctive thatch. It provides an interesting welcome to the commercial village centre.

Around the turn of the century Sidney Skelton Marshall, the founder of Barnham Nurseries, turned his attention to property development. His vision was to build large detached houses to attract wealthy professionals. He formed West Barnham Estates and, with a loan from his father, he set about buying and leasing land from the Ecclesiastical Commissioners along the Barnham to Eastergate road, and at Elm Grove and Downview Road which were no more than dirt tracks leading to nowhere.

Success breeds success and Barnham was booming. By 1908 land prices had increased and plots from half an acre upwards were regularly offered for sale by the West Barnham Estates in the Chichester Observer.

Some of the prominent people who occupied these larger houses in Barnham Road were the directors of Barnham Nurseries: the Pertwees at The Oriel in 1910 and The Cedars in 1930; and the Chapples at The Laurels. At The Oaks (now Oakhurst, No.146) lived the artist Walter Stuart Lloyd.  His career as a watercolour painter flourished between 1875 and 1929 and he was the youngest member to be elected to the Royal Society of British Artists. Lloyd produced slightly romanticised paintings of landscapes and seascapes, many of Sussex.  A typical example of his work is ‘Back of the Farm’ which is a painting of Parsonage Farmhouse painted in 1902 when he lived in Barnham.  He also supplied the etching of St Mary’s Church for the 1904 edition of the parish magazine.

The Pines (now Abbey Dean, a home for the elderly)

This large detached house (photo in right hand column) was occupied from 1904 by Dr John Boniface Collins, the local village doctor. Born in Yapton in 1869, he was named after his father who was also a Member of the Royal College of Surgeons and the Royal College of Physicians. Both were part of the larger families of Collins and Boniface in the area which included William Collins of Elm Tree Stores, Eastergate, and Richard Collins of Parsonage Farmhouse. It is interesting that, once qualified, Dr Collins junior chose to return to the local area. Dr Collins married Mabel Elizabeth Collins and they had at least two daughters, Irene, who it seems never married and Enid who married Herbert Wentworth. His doctor’s surgery was a small extension that can still be seen to the left of the large Edwardian building and, although he died in the 1950s, he is remembered by some local residents, including Arthur Timlick, son of Frank Timlick the boot mender, and by Polly Edwards (nee Harris) who recalls the doctor’s whiskers as he bent close to examine her ears and throat.  It is said that he visited his patients by pony and trap before he bought his motorcar and there were stables to the rear of the substantial property.

After the death of Dr Collins, Arthur Dean, a local builder, bought The Pines and split it into two properties - No.104, on the left, and No.102, then called Candida, on the right.  He sold the tennis courts and the rear garden to his three sons, Arthur, Geoff (father of David, who was the proprietor of the nursing home for many years) and Bill, who had taken over the running of the family building firm.  Treetops (No.100) was built there with the original driveway to The Pines becoming its driveway (the wall and posts can still be seen).  No.104 retained the name The Pines and was sold to Mrs Howard Jones who lived there until her death in 2009.  No.102 was let to Mr and Mrs Ron Wadey.  Abbey Dean was opened at No.102 in February 1991 initially with nine bedrooms, extending to fourteen bedrooms.  With the purchase of No.104 from the Estate of Mrs Howard Jones, the building is one unit once again – now operating with eighteen bedrooms. David Dean F.R.I.C.S. and his wife Laramie Dean BSc. (Hons) SRN have since sold Abbey Dean, home for the elderly. 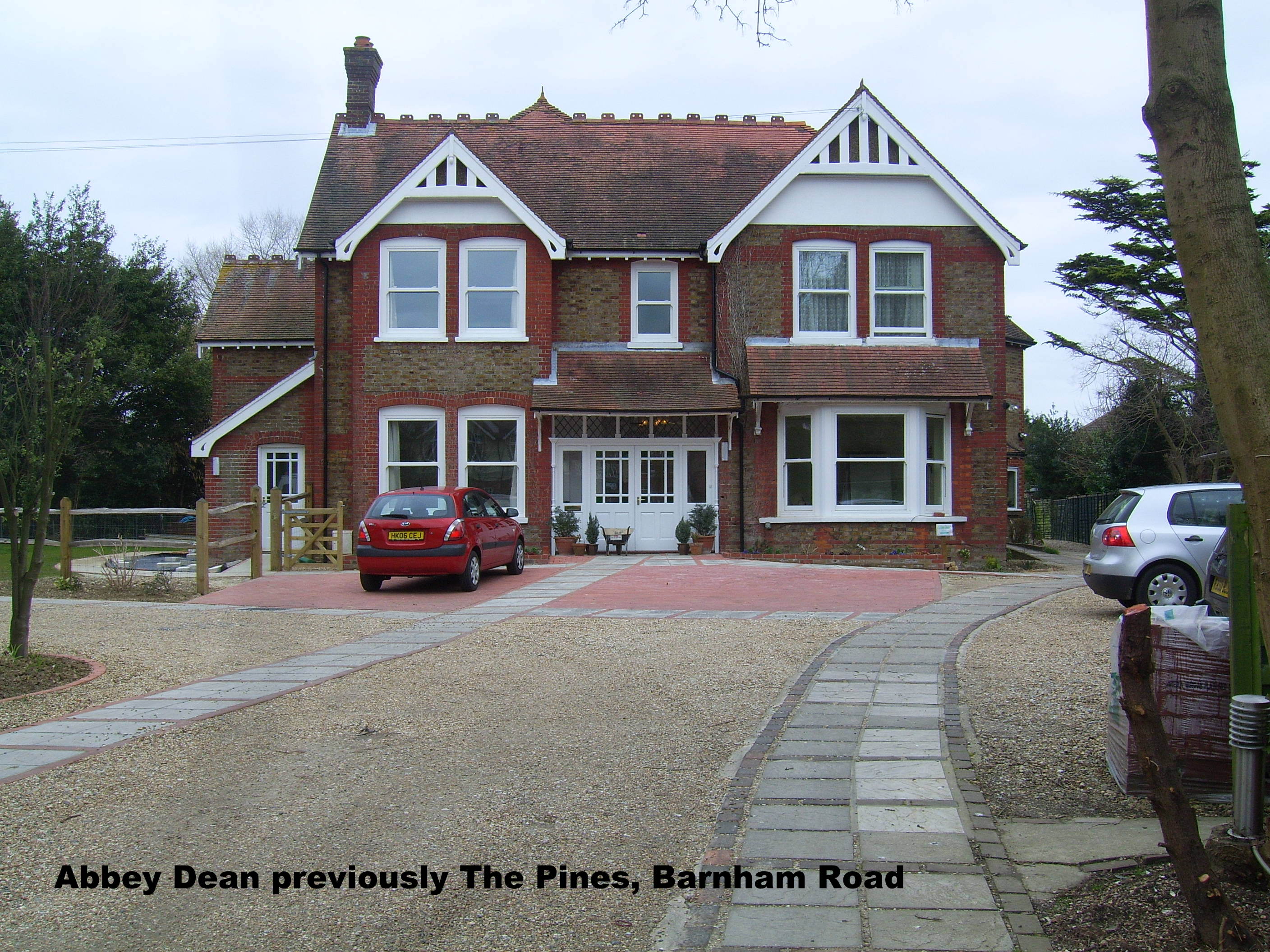