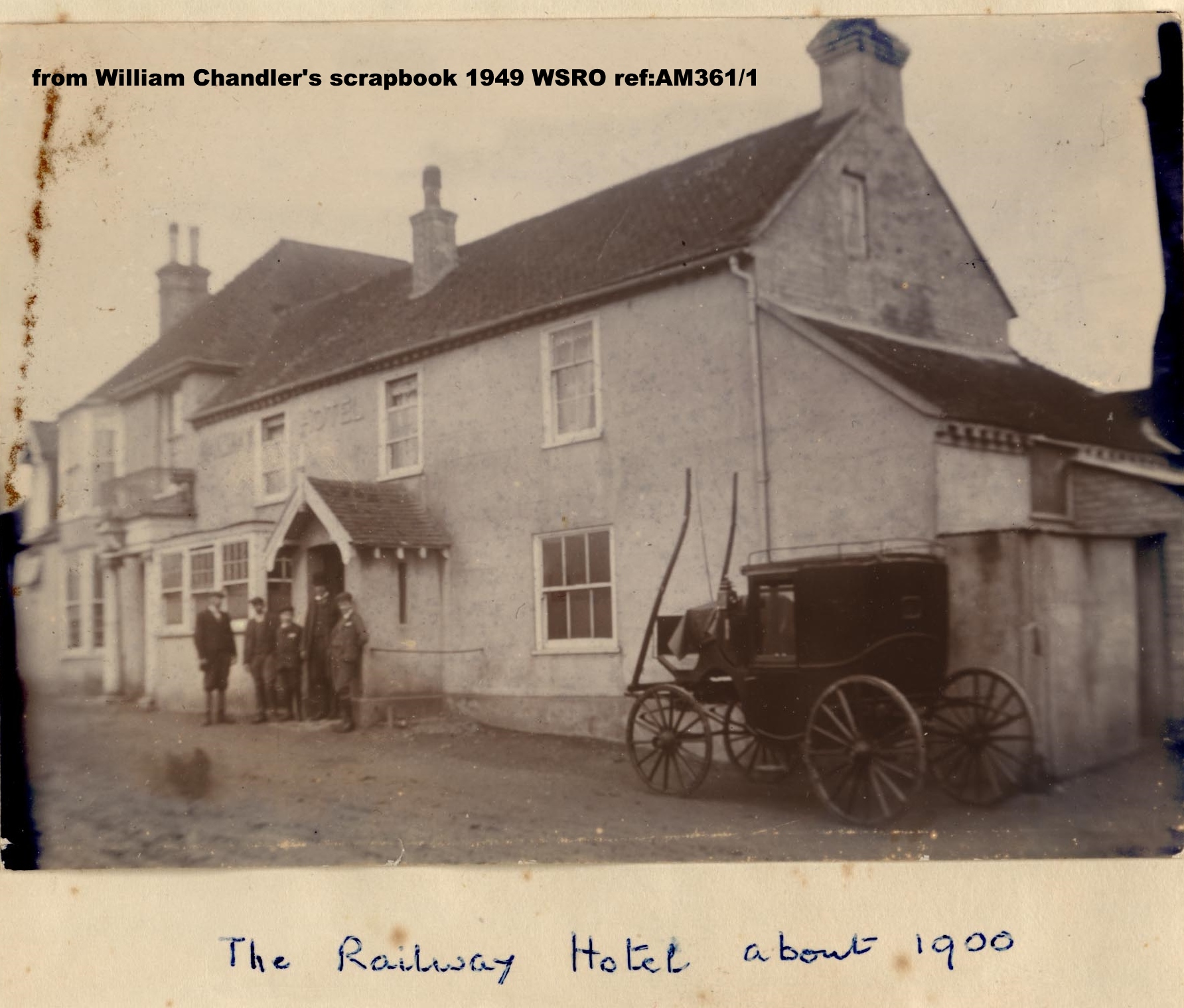 A public house has stood on (or very close to) this site since the beginning of the 19th century, named variously the City Arms, Barnham Bridge Inn, the Knights of Malta, the Railway Inn, Railway Hotel, Barnham Hotel and finally back to the Barnham Bridge Inn.

According to extensive research carried out by the late Mervyn Cutten whilst landlord of the nearby Murrell Arms, the City Arms was a modest brick and thatched watering hole just west of the current pub on the road between the villages of Eastergate and Barnham, and built by Thomas Trew, brewer of South Street, Chichester.  It would have welcomed travellers and locals alike. By 1823 it was owned by Edward Field with Joseph Bridger as tenant and the name had been changed to the Barnham Bridge Inn after the nearby bridge over the rife (the stream that marks the boundary between the parishes of Eastergate and Barnham).

The 1845 tithe map and apportionment lists ‘Barnham Bridge Inn and gardens’. The brewer was Charles Gatehouse and the occupier was William Caiger. The railway had been built but a station was not foreseen and the building is surrounded by fields with the village centre some distance away near to the church.

In 1846 Charles Gatehouse, the brewer, and William Goatcher, the new tenant, changed the name to the Knights of Malta; it is said that a Masonic group of that name met there regularly.

For the opening of Barnham Junction station in June 1864, the inn was enlarged at a cost of £500 and renamed The Railway Hotel. In 1902 Harry Knight was the publican and is described as ‘Wine, Spirit & Coal Merchant, Agent by appointment to the London, Brighton & South Coast Railway Co.’ and providing a funeral car, pair of horses and two carriages for the funeral in Pagham of a Mr G Gadd of Westergate. An enterprising man – and to this must be added property developer! By the turn of the century Barnham was expanding rapidly; nurseries had sprung up, taking advantage of the rail link to Covent Garden in London; Barnham livestock market had opened; and shops, banks, coal and grain merchants followed. The inn had become a hotel and the decision was finally made to demolish and rebuild.

On 21st August 1907 the Chichester Observer reported the opening of a “very handsome” establishment with all the advantages of a modern hotel, retaining the name The Railway Hotel. Albert Coe was the new proprietor and, with his wife Edith, ran a prosperous establishment until his death in 1936 when his daughter took over. It was said that the Monday market trade was enough to last until the following week. The Coe’s gave up the licence in 1945 after 37 years and two world wars. The market would close just four years later.

The second half of the 20th century saw little demand for hotel rooms in Barnham and the hotel became a public house despite its change of name once more to the Barnham Bridge Inn. By 2014 the premises had been sold to Tesco, the supermarket, who wanted to open it as a Tesco Express. The building was cleared, hoardings erected, and the building left to deteriorate. In June 2016 its fate is still awaited.

In 1845 the gardens of the inn extended to the rife. Following the opening of the railway station in 1864, two cottages were built within the grounds. Today these are numbered 2 and 3 Rose Cottages. The rear walls are flint and it is possible that the front was clad in brick when the adjacent, and larger, cottages were built between 1871 and 1881. A close look at the chimneys also confirms that numbers 2 and 3 are both older and different. The 1871 census records Anthony Taylor at The Railway Inn. Railway Cottages, as they were known, were occupied by George Collins, railway porter, and his family, and by Christopher Denman, railway porter, his wife and daughter and two lodgers who were also railway porters. The 1881 census records four cottages with Christopher Denman, by then a signal man, the only occupier with a connection to the railway.

The photograph right shows four cottages c.1907 set out as follows: numbers 2 and 3 have single frontages (the width of the hallway and front room) but with double width rears (as can be seen on earlier maps). Numbers 1 and 4 have been built with double frontages (a front room to either side of a hallway) and a single width rear – thus making the whole footprint rectangular. These later cottages are altogether larger than the original two. This can be seen on the 1912 map.

The current owner of number 2 has two deeds of conveyance, one dated 1896 between George Henty & Sons Ltd (of the first part), Richard Biddulph Martin and Charles Percival Henty (of the second part) and Harry Knight (of the third part), and the second dated 24th February 1905 between Charles Stride and Harry Knight. They are difficult to understand but they support the view that the cottages were connected to the inn (Harry Knight was one time publican and later a property developer).  The 1910 Inland Revenue ‘Domesday Book’ also lists Rose Cottages as 4 let cottages owned by Harry Knight.  However, Harry Knight died in 1911 aged 53 and the cottages passed to his heirs.

Number 5 has been added later in a conventional way and was built by 1918 when Albert William Bowley died there whilst living with his daughter Mary and her husband George Debenham  (according to the Burials for Eastergate, St George’s Church, WSRO ref: PAR 76 1/5/1).

Gerard Young wrote about the terrace in his book, The Cottage in the Fields, published in 1945:

“From the high railway station I looked down at a row of Victorian villas with a long communal slate roof.  The slating over all the villas was gilded with yellow lichens, except for the last one.  Here for no discernible reason the slates were completely bare.  The lichens stopped at some invisible barrier, ending in a dead straight line from ridge to eaves.  For a moment I had a fantastic vision of the owner sitting on his roof scraping the growth away, leaving a boundary line of geometric precision down his neighbour’s slates.  There must be, however, another reason, which I will find out.”

If he did find out, he didn’t share the answer with the reader but it is clear that he was describing number 5 Rose Cottages. 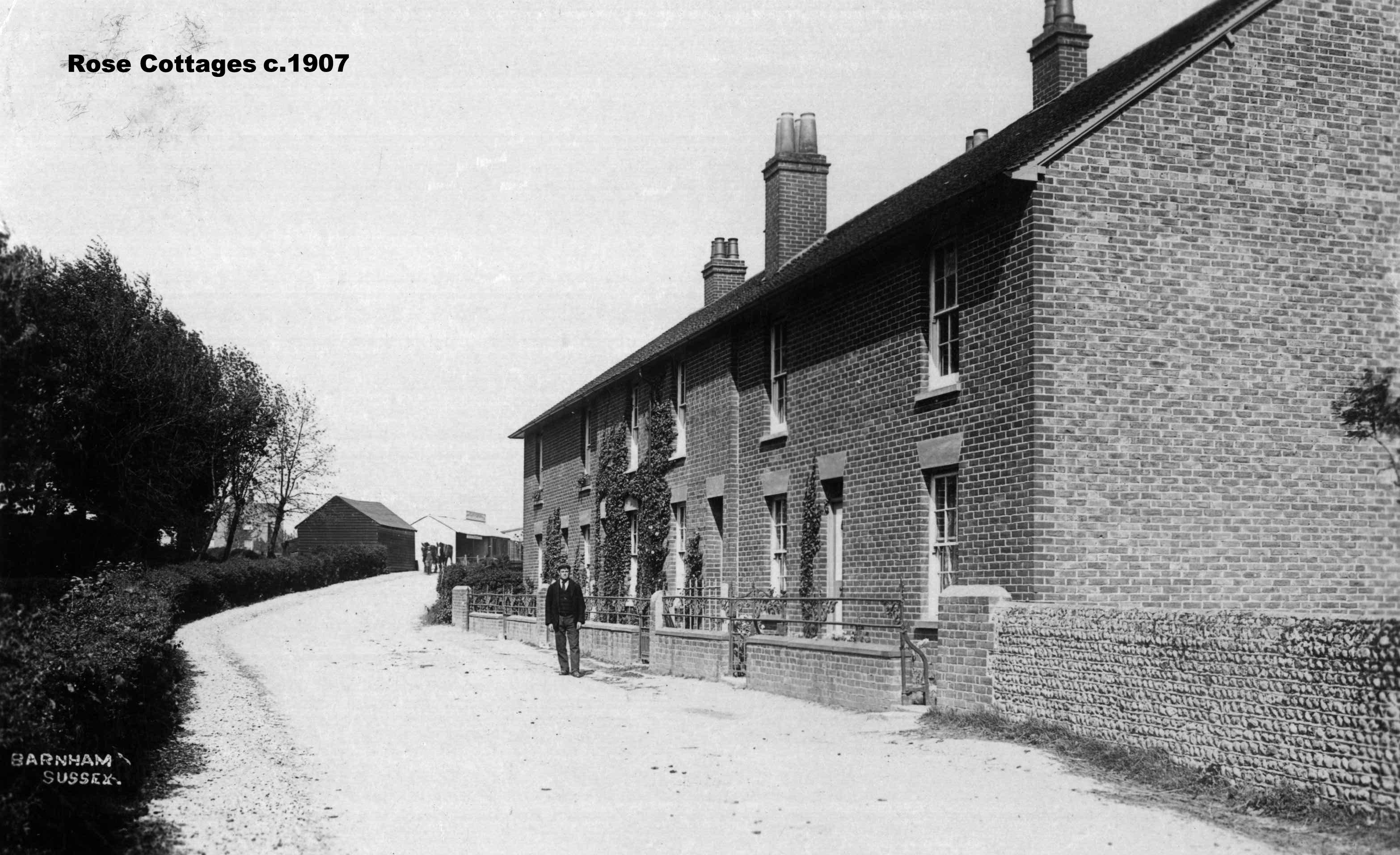