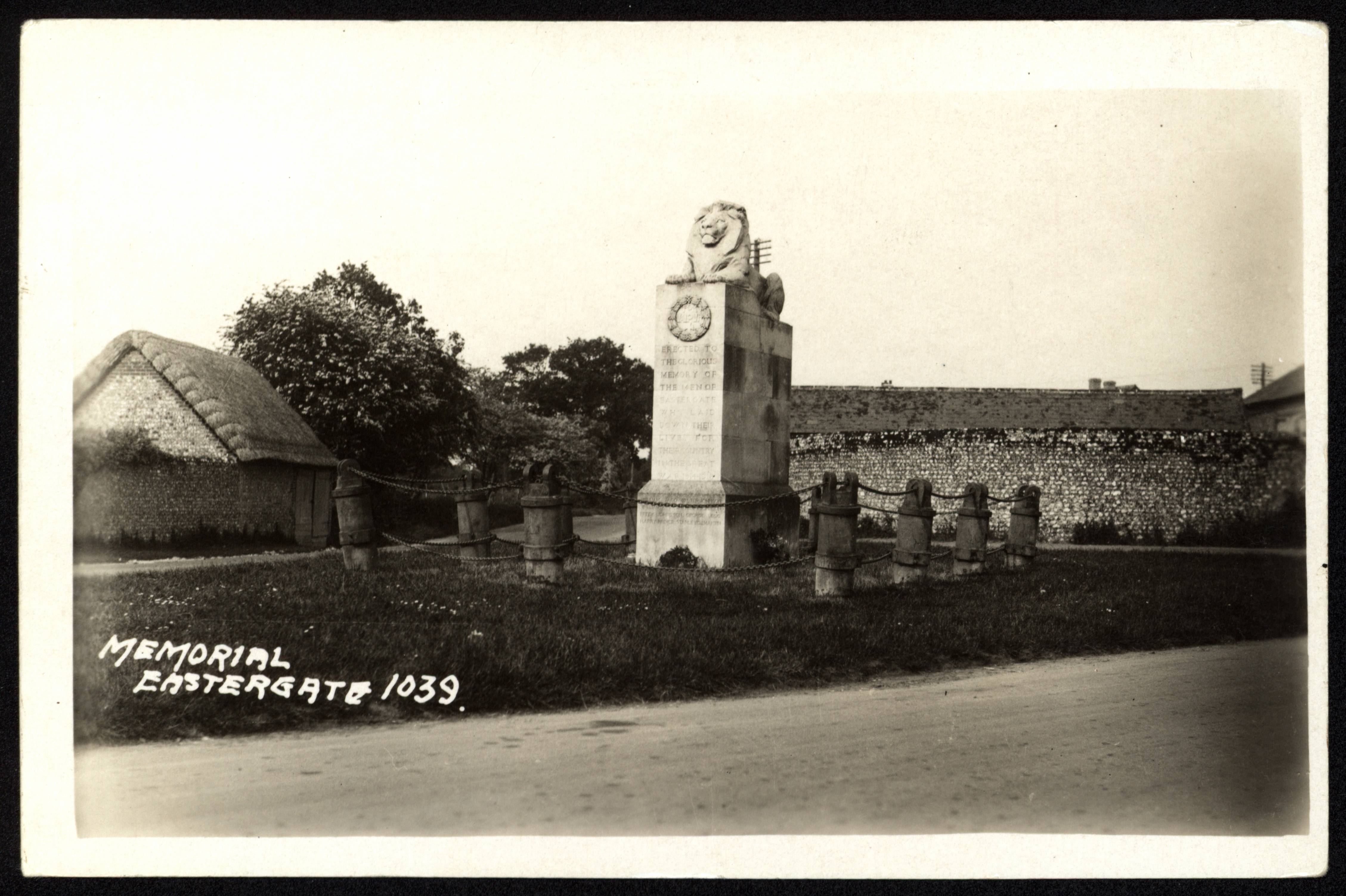 Remembering the Eastergate and Barnham men lost in the Great War

To commemorate the centenary of the First World War, extensive research has been undertaken by many groups and individuals. Local resident Gill Shaw mounted an exhibition in St Mary’s Church, Aldingbourne, in 2011 detailing everyone in the parishes of Aldingbourne, Barnham and Eastergate who had died in conflict between 1914 and 1988. Her findings are to be published in a book which will be available hopefully in 2017. Click for a pdf of her leaflet Lest We Forget – Battle of the Somme Lest we Forget [pdf] 1MB focussing on 15 men from the three parishes who lost their lives there in 1916. The information set out below is a brief look at the memorials and description of the fallen. Details of Gill’s book will be included when known.

The 1914-18 war had a tremendous impact on the country and was felt especially in small villages where such a large proportion of their young men were lost. In many cases families were left to mourn with no funeral and no grave; sons, husbands, brothers, fathers and lovers went away and never returned. A memorial to commemorate and remember the dead was sought and these were erected in towns and villages, unveiled by local dignitaries and benefactors and blessed by bishops and clergy. There is no such memorial in Barnham but a magnificent monument stands in Eastergate on its border with Aldingbourne and this serves local people on Remembrance Sunday every year as a place to remember all those lost in wars.

The Eastergate memorial is fourteen feet tall and is a lion atop a concrete plinth sited in the centre of Eastergate Square, originally on a triangle of land which is today a traffic island at the junction of the A29 and Barnham Road (B2233). The unveiling, by the Duke of Richmond and Gordon of Goodwood House, took place on 19th December 1920. It is reported that his speech stated:

“Home dwellers or strangers, no one can pass through Eastergate henceforth without a thought for the men who died in the war. The Parish Memorial, a stone monument mounted by a well carved Lion, stands on the green in the centre of the square where every passer-by must see it and be reminded of what it stands for.” (From Around Aldingbourne by C. Mewett and V. Salmon, 2006)

The memorial was ringed by a chain linked to cannons captured from the Russians at Sebastopel. These were removed in the Second World War to support the war effort.

The following information concerning the men whose names appear on the Lion war memorial is taken from the website:

Please visit the website for their military and burial details.

Charles Baker - information given but uncertain

Herbert Collins aged 34, son of Mr & Mrs Collins, The Cottage, Eastergate killed in action on the Rue de Bois 19 May 1916

Cecil Albert Godley aged 32, son of Mr & Mrs Godley of 14 Council Cottages, Eastergate and husband of Anne Godley of The Cottage, Westergate killed in action near Arras 15 May 1917

Alec H Hyams, son of Mr & Mrs Hyams of The Old House, Eastergate killed in action near Ypres 3 May 1915

William Edward Jago, lost at the Battle of Jutland 31 May 1916

William Henry Johnson, aged 31, son of Mr & Mrs Johnson as above and older brother of Walter Johnson, lost in the Battle of Coronel Islands 1 November 1914

Leonard Parvin next of kin – Eastergate, killed in action at St Quentin 24 September 1918

George Edwin Walker born in Aldingbourne, killed in action on the Somme 7 July 1916

On there right of the page is a painting to be found in the Eastergate Parish Hall in Barnham Road, taken from The Parish Hall Adventure by Susie Peters with photographs by John Donabie, published in 2007. It reads: 1914 1919 THESE DIED FOR THEIR COUNTRY

The names correspond to those on the Lion war memorial with the addition of:

Percy Baker – he also appears on the memorial in St Mary’s Church, Barnham;

Alfred Winn Ford and John Haskell – as this memorial is dated 1914 – 1919, it may be that these men died after the war had ended.

North Window reads: “To the Glory of God and to the memory of William Millar Warne temporary Lieut RGA who was killed at Neuve Chappelle May 21st 1915” RGA=Royal Garrison Artillery, he was buried in Browns Road Cemetery, Festubert.

Another reads: “Greater love hath no man than this that a man lay down his life for his friends To the Glory of God and as an enduring memorial to all from this Parish who gave their services in the Great War 1914-18”

A further memorial window in St George’s Church is in memory of Earl Kitchener (1850-1916) and was commissioned by Edward Brandon of Eastergate. Brandon lived at Northfields House in Level Mare Lane. His sister, Kate, married Sir George Arthur, Private Secretary to Earl Kitchener. The three panels show Christ in the centre flanked by St George in gold armour and St Michael in silver. The tracery work shows a desert scene, suggestive of his work in retaking Egypt, and Christ walking on the sea, referring to the manner of his death when HMS Hampshire struck a German mine while taking Kitchener to Archangel, Russia. The inscription reads:

“To the honour of Christ & His Saints and in grateful memory of Horatio Herbert Earl Kitchener of Khartoum His Majesty’s Secretary of State for war from August 1914 June 1916 His genius & indomitable energy and the implicit confidence reposed in him by his king and country enabled him to raise the vast armies that proved the salvation of the British Empire for which he laid down his life + coffined in a man-of-war he passed to the great beyond.”

Of these 13 men, several have appeared during research undertaken for the book Barnham How the railway changed village life (2013).

Percy John Baker was the eldest son of John Baker, the miller at Barnham Mill, living at Mill House. He worked alongside his father from a young age and was to take over the running of the mill in time. He died of his wounds on 7thDecember 1915 at Gallipoli. He was single and 31 years old. His younger brother, Leonard, who at 14 was a bricklayer, took his place, inheriting the mill, cottages and outbuildings in 1934 on the death of their father.

Frederick Henry Greenfield and his wife Maud lived at 1 Mill Cottages, Yapton Road, opposite Barnham Mill. According to the 1911 census they had two children, Edward then aged 2 and Letty aged one.  Frederick was killed in action in 1916 aged 33.

Henry Leverton (known as Harry) was a postman in 1911. His mother gave birth to at least 12 children and died when Harry was 10 years old. They lived at Railway Cottages (now Grey Tiles) next to the Murrell Arms. He was 30 years old when he died and single.

In addition to the men commemorated on these memorials, our gratitude should also go to those injured either physically or mentally in the war and whose names are not recorded. 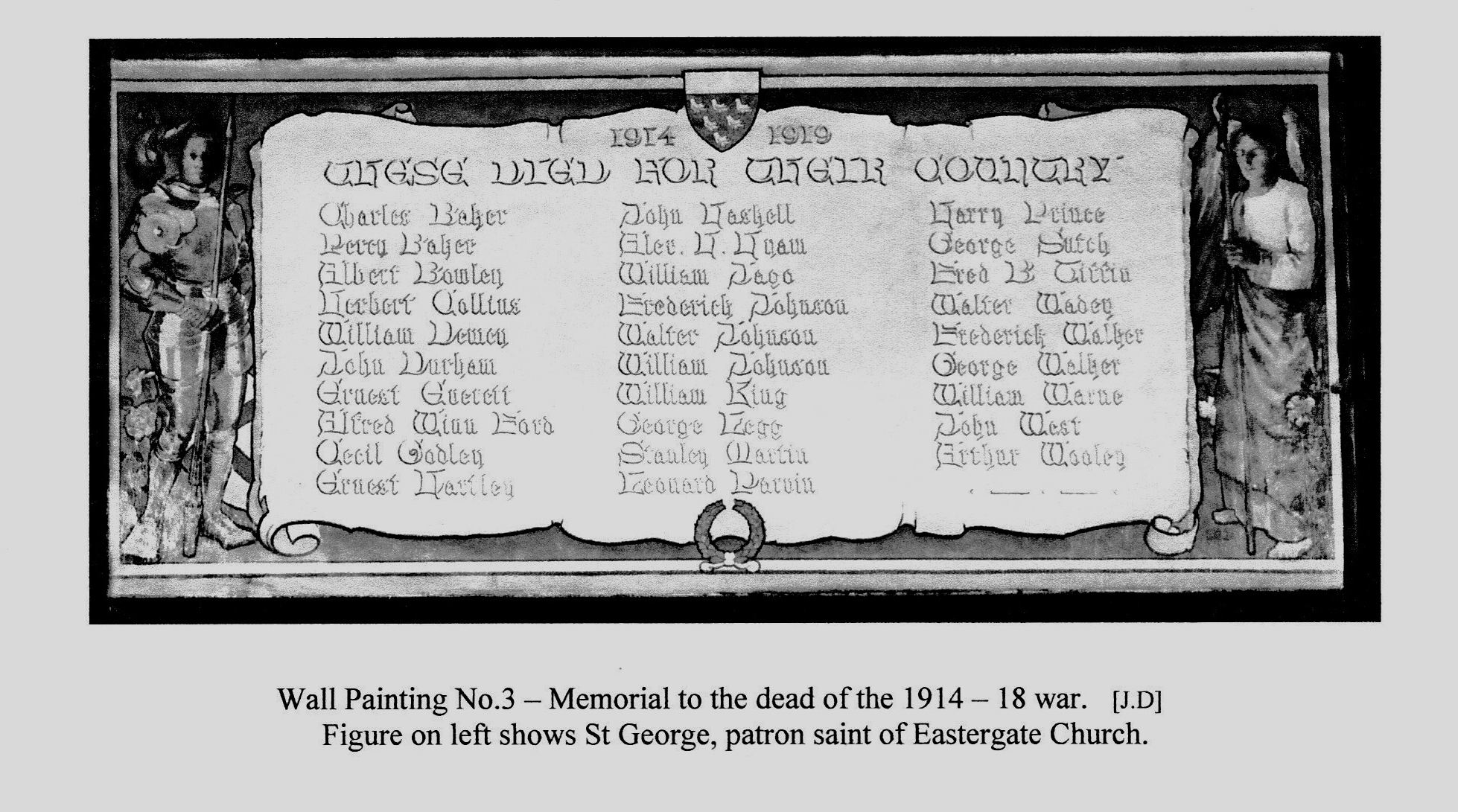