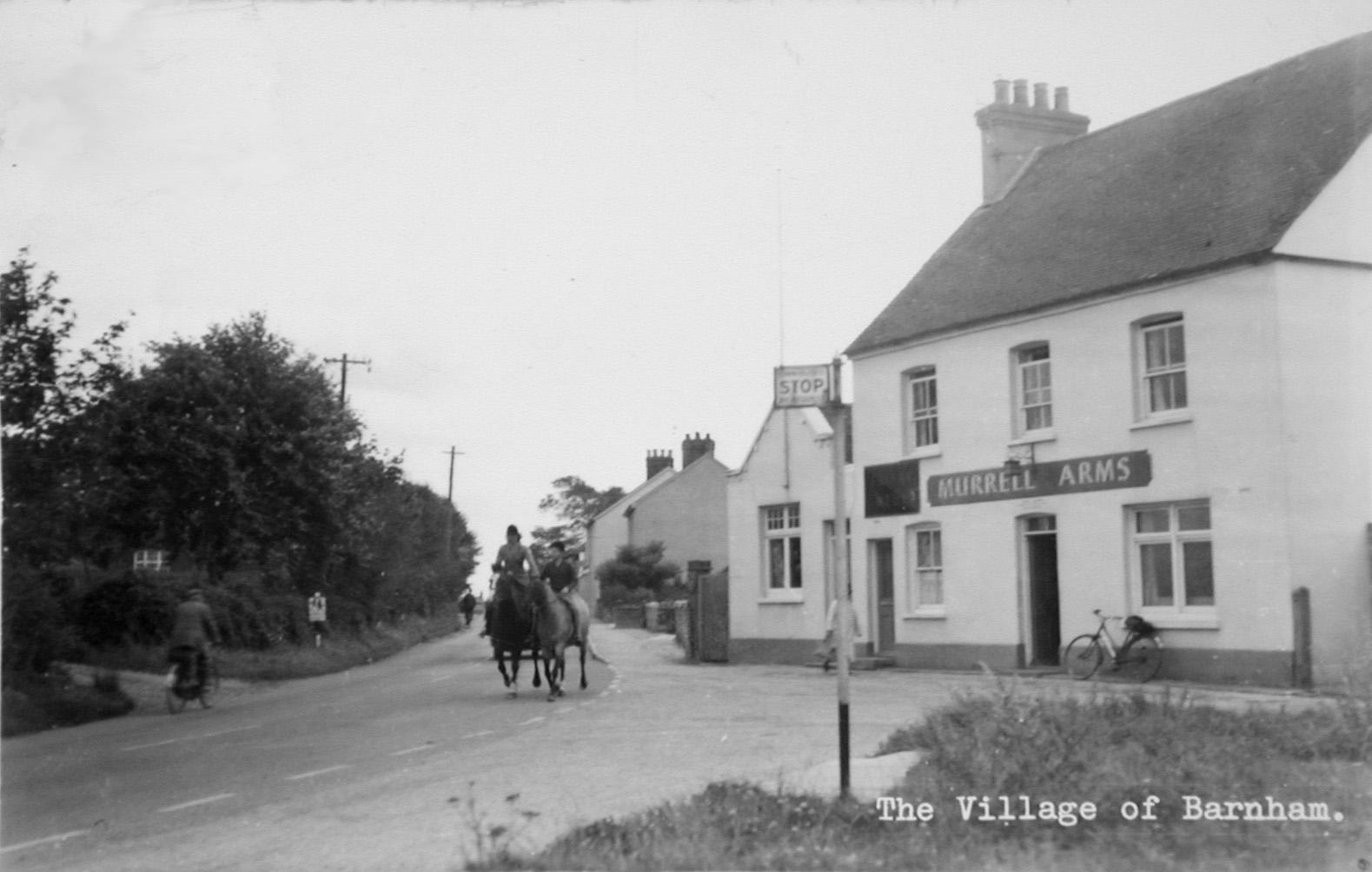 The Murrell Arms, the Wheelwright’s & Smithy

The Georgian farmhouse was once the pride of William Murrell (1718-91). Before William died he could not have envisioned the plight of his heirs who, having sold off his land, turned his home into a public drinking house. Neither could he have known that a steaming belching iron horse would pass so close by, shattering the tranquillity of this quiet backwater. William was a respected yeoman – a land owning farmer – who married 17 year old Elizabeth Duke in 1747 and with whom he had ten children. William and Elizabeth lived for many years at Manor Cottage near to the church and her sister married the yeoman William Cosens of Barnham Court.  We can only imagine the family socials these two households may have enjoyed. A measure of William’s importance is his resting place with his wife beneath a stone slab in St Mary’s Church near to the font. The inscription reads:

Physicians were in vain

‘Til Death did seiz and

To ease me of my pain

On his death, the estate passed to William’s son Joseph and, when he died in 1840, to Joseph’s daughter Mary. On Mary’s death in 1862, her brother George inherited what was by now only the farmhouse and outbuildings, the land having been sold. The opening of Barnham Junction Station in 1864 offered George Murrell the opportunity of diversifying by building cottages for railway workers adjacent to the farmhouse and by applying for a licence to open a public house. It is said locally that Curacao, a cottage in Church Lane, was once an ale house but this must have been at a much earlier time. There was opposition from the newly extended inn closer to the station in Eastergate parish (not the current building) and from local church people but, as there were no other such premises in the Barnham parish and the application received much local support, the licence was duly granted in 1866. George Murrell chose the name and brought in a landlord, Robert Marshall (1823-1906), a carpenter and joiner by trade.

George Murrell died in 1867, not long after the opening of The Murrell Arms and his heirs sold the business to Anchor Brewery of Littlehampton. It is not known when the Victorian stucco was added to the front of the building, giving it the appearance that it retains today with its ornate lettering but this, and the distinctive, unique name, has been maintained by various breweries to the present day.

The acquisition of the business by Anchor Brewery marked a new chapter in the history of The Murrell Arms. According to research by Mervyn Cutten, about this time Richard Cosens of Barnham Court died and the brewery invited his carpenter and wheelwright Henry Hall to take over the licence. A workman who faced the loss of his employment would also lose his home if a tied cottage had been provided by the employer so this proposition would have been welcomed by Hall.

Two developments followed during Hall’s 25 years as publican. The first was the long association with the Littlehampton Fire Brigade. Mr Archie Constable of Anchor Brewery offered to convert the old stable for the use of the Brigade and others as a club house and function room. This is now the Stable Bar. Hall would meet the horse drawn fire engine at the mill dressed in his smock, red ‘kerchief and beaver top hat and escort it to fire practices on the nearby field, now Marshall Close. What a sight this would have been with the whole village turning out to watch! The association with the Littlehampton Fire Brigade continued right through to the end of WWI.

Adjacent to the public house on the corner of Church Lane had stood a former coach house. This had been turned into a skittle alley and carpenter’s workshop. During Robert Marshall’s time as landlord the coach house had burnt down and had not been rebuilt. It was necessary for Henry Hall to supplement his income by continuing with his trade as a carpenter and wheelwright and a new workshop was built where the car park is today, together with a blacksmith’s shop run by Harry Dollery. This once quiet corner of Barnham village was transformed into a hive of activity with the hammering of the wheelwright and blacksmith and a place to quench the thirst next door. At this time the inn opened at 6a.m. for farmworkers and would remain open all day with Hall taking over from his wife behind the bar in the evening.

"We boys were often late for school through watching the smith, Harry Dollery, shoeing a horse or fitting a red-hot iron tyre to a waggon wheel."

After Mr Dollery retired the son of the landlord of the Inn, Will Brown, carried on as smith for many years, his father being the wheelwright and a clever maker and repairer of furniture.

The two enterprises moved with the times and eventually became the Murrell Engineering Works repairing farm machinery and motor vehicles. This was run by Mr Tony Parker before its demolition in the 1960s to make way for a car park.

According to Cutten, Henry Hall lost his licence in 1903 through his son-in-law selling liquor off premises. Hall continued to work as the local wheelwright until his death in 1915. Charles Joslin a coachman from Madehurst took over the licence for four years and then it was taken by the Brown family who would run the pub until the Cuttens arrived in 1964. The first was William Francis Brown (1861-1919). He visited The Murrell Arms regularly as a member of the Littlehampton Fire Brigade and had married Agnes Dollery (1861-1929), the sister of the blacksmith. Knowing fellow fireman and owner Archie Constable, he was well placed to apply for the job. During the great war the sale of alcohol was restricted to two and a half hours around midday and three in the evening. In 1918 the hours were extended to 10a.m. to 2.30p.m., 6p.m. to 10.30p.m. – slightly less on Sundays. It must have been difficult for the licensee to make a living.

When Will Brown died in 1919, his wife Agnes took over and was helped in the evenings by her son, also called William, who worked with his uncle Harry Dollery in the blacksmiths. Bill Brown, as he was known, married Fanny, the young cook from The Vicarage in 1925 and, when his mother died in 1929, Bill and Fanny became the licensees. When Bill died in 1946, Fanny continued with the help of her daughter Eirene and Terry Lanigan who became her son-in-law.

During these years, the population of Barnham had steadily increased and the entertainment to be found at the village pub became more organised with darts and cribbage teams challenging other establishments. Shove Ha’penny, Ring the Bull, and Spinning Jenny (similar to roulette) were also available and we must not forget the music that would be played first by the customers themselves and later by paid acts. The main draw however was the draft ale, as it is today.

Mervyn and Daphne Cutten took over from Fanny Brown and her family in 1964. Fanny was 93 when she died in 1986. Mervyn retained the décor and atmosphere of a ‘proper’ village pub, filling the bars with photos, farm implements, bottles and memorabilia from a bygone age. He also laid out the tiny ‘village green’ as a commemoration of royal events and the Falkland Isles conflict. He was a writer, a collector and a local historian. He died in 2006.

The current landlord is Joseph Murphy who in 2015 stamped his mark by replacing the sign from a fictional depiction of George Murrell to the Murrell coat of arms.

For photographs – follow this link to Flickr  where you will find many images of the Murell Arms through the ages. (Flickr is an external site where images are hosted).

For photographs – follow this link to Flickr  where you will find many images of the Murell Arms through the ages. (Flickr is an external site where images are hosted).